November 8, 2021 - The World Council of the International Melges 24 Class Association held its Annual General Meeting (AGM) virtually on November 6. Here’s a short overview of the voting results and decisions made.

The meeting started with Chair Laura Grondin welcoming everyone present.

Media & Communications: IM24CA’s new website, launched in February 2020, continues to show growth in activity of the visitors. Social media engagement increased a lot on Instagram by nearly 2,000 followers and a high level reach up to 356k views per year was reported. The importance of posting photos and especially videos by sailors, tagging IM24CA accounts, will help IM24CA to exposure Melges 24 better all around the world engaging more and more followers.

Financials: Class affiliations were up 13.4% overall - 14% in North America and 19.8% in Europe. Sail Label sales were up by 90 or 55% compared to 2020 but still low compared to the pre-pandemic year(s).  Revenue exceeded budget by 15,000 and there will be almost 6,500 in surplus. Class affiliations and sail labels are budgeted at same as 2021 even though the hope is it will be better.

Technical: The Technical Committee reported a relatively quiet year (compared to last) in terms of new issues that required attention. The Selden mast certification was still pending, which was a carryover from previously, and this did make up the bulk of activities which involved modifying the class rules for compliance. Assuming our most recent changes to the class rules (which were approved by our World Council at the September EGM) are ratified by World Sailing, the Selden mast now conforms to our class rules. Selden Masts UK has re-engineered their first 2 prototype spars and now has all the data required to build an approved Melges 24 mast including class specified stiffness limits. All that remains now is on the water testing and approval by Melges Boat Works as per the builder’s specification.

All reports are available at AGM website under their respective tabs.

All national class representatives introduced themselves and reported about the year which was still a lot impacted by the Covid-19 pandemic. Annual class reports are available at the AGM website under tab “Country reports”.

David Bartol, event host from YC Marina Portoroz, also IM24CA Championship Coordinator, reported the Europeans 2021 having been a successful event, hosting 40 teams from 14 nations despite of several challenges in addition to Covid-19 pandemic. Challenging but good sailing conditions allowed to deliver 11 out of 12 races during five racing days. All scheduled social events ashore also took place, including Sailors' Dinner. According to Swiss Michael Good, the owner of Cinghi Aile highlighted great venue and marina area with a great organization, which was also well managed on the water. Extensive media coverage was made thanks to the experienced media team including photos, videos, drone footage, daily highlights, interviews, daily press releases and social media coverage (Instagram and Facebook).

The status of the organization was reported for the future events.

Since the Regatta Chair Tom Lihan and Championship Coordinator for the Melges 24 Worlds 2022, Carol Ewing could not attend the meeting, IM24CA Chair Laura Grondin gave an overview about the current status of the organization with detailed information about the logistics, venue, planning and activities in neighbouring marinas, facilities, racing areas and sailing conditions, schedule of the events and to date confirmed event staff.

Notice of Race to be forthcoming. There will be an option for early training with launching at LYC facilities and docking at Pier 66 or Bahia Mar Resort. Restrictions on entry into the US have been lifted but full vaccination and a negative COVID test is required. US class is compiling charter boats and will list on their website. Read full report here

Dan Berezin, the President of the Melges 24 Canadian Class Association reported that despite of several postponements due to the pandemic, Toronto National Yacht Club is willing to host the Melges 24 North Americans in September 2023, preceded by the Canadian Nationals to be held there in September 2022. The timing of the event will match with the best wind conditions at that time of the year.

Soren Laugesen, the manager of GoSail in Middelfart, who was regatta director for the 2015 Melges 24 Worlds at the same venue, reported the status of their preparations. Compared to 2015 marina has been renewed and has lot more space than back then. The choice of dates at the end of June was made based on the less expensive hotel prices and availability, because the holiday season in Denmark starts in July. Soren reported also about the successful negotiations with the local municipality and potential supporters ready to support the event and his willingness to co-operate with Melges Performance Sailboats to put up the show to celebrate the 30th Anniversary of Melges 24 boat there. Event contract between IM24CA and the event host to be forthcoming.

Elections of the officers

IM24CA received two submissions to nominate a Vice Chair Europe: Piero Andolina from Italy and Michael Tarabochia from Germany. Both candidates introduced themselves to the World Council and after that a vote was called and Piero Andolina was elected as the new Vice Chair of IM24CA (25 votes for Piero and 24 votes for Michael). Michael Tarabochia will continue to serve as Member Europe.

Regarding the role of Treasurer, while IM24CA did not have anyone nominated by the deadline of September 18, but the nominee of Miles Quinton, current IM24CA Vice Chair Europe was proposed and noticed to the World Council by the deadline of the revised agenda for the AGM, the World Council voted on that nominee during the AGM. Miles Quinton was elected to the role of Treasurer.

The World Council unanimously re-appointed Mike Gozzard from Canada to continue in the position of the Technical Committee Chair.

The following Class Rule Change proposals were accepted by AGM and will be sent to World Sailing for their review and ratification:

Also, some amendments to the Regatta Regulations were approved.

USM24CA proposal, introduced by Krak Arntson, to adopt the 2015 M/24 design of the Melges 24 Class Signal Flag, for use as the official class warning flag for fleet racing was discussed and motion carried to vote on proposal with amended wording, where the abovementioned flag will be adopted for the world and continental championships.

Laura thanked Mike and everyone in the Tech Comm and other working groups for the tremendous work done during the past year.

It was agreed on to review the regatta Regulations by the Executive Committee with the supervision of Technical Committee to conform with the latest RRS 2021-2024.

The meeting was adjourned at 1:20 pm EDT 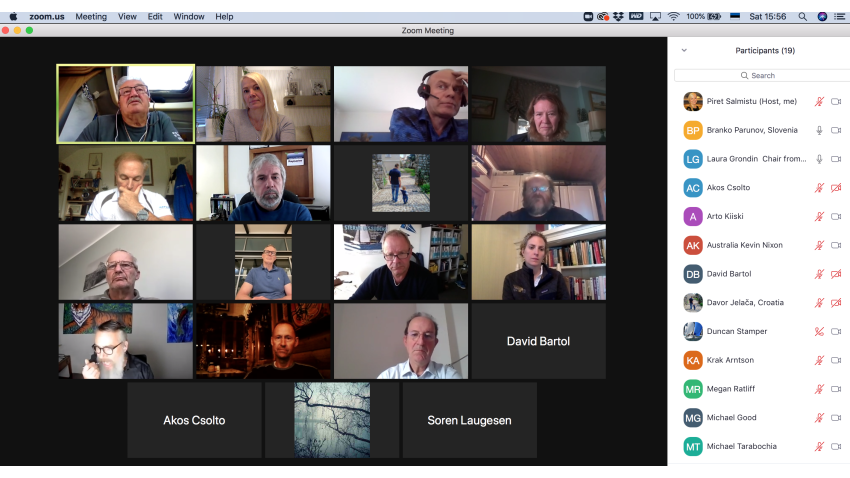