Melges 24 European Sailing Series 2021 - Melgina and White Room are the champions of the series, Black Seal wins the final regatta in Trieste

October 04, 2021 - Trieste, Italy - 2021 Melges 24 European Sailing Series concludes in Trieste, Italy after the earlier events held in Malcesine and Riva del Garda in Italy and Melges 24 Europeans in Portoroz, Slovenia with a total of fifty-one teams from fifteen nations that joined the circuit this season. Having taken part of all the events of the season, Paolo Brescia’s Melgina, from Italy, is the overall winner of the 2021 edition while German Michael Tarabochia's White Room secures the victory on Corinthian division, completing also overall podium of the series, where second place belongs to Sergio Caramel’s Arkanoe by Montura, from Italy. Top three teams were taking part of all five events of the season, not missing any of the fifty-one sailed single races.

Paolo Brescia, the owner and helmsman of Melgina, holding the perpetual trophy donated to the series by the former Chairman of IM24CA, Riccardo Simoneschi (2011-2014), which has been awarded since 2013: “It was a great series of events. Our goal was to improve event by event and we are very happy about the result!” Tactician Simon Sivitz was thanking entire Melgina crew, who were helping to secure this result through the season and added, that their goal was to develop through the season: “We made some changes, tried the new boat and may be all this was a bit hard for us and we have had a very different performance during the season. But, at the end, we won the ranking, so, something good was done!”

Second classified of the 2021 Melges 24 European Sailing Series is Arkanoe by Montura of Sergio Caramel from Italy, who was sailing through this season with Karlo Hmeljak, Filippo Orvieto, Federico Gomiero, Michele Meotto, Michele Bonetti, Riccardo Gomiero, Vid Jeranko and Stagni Alessandro aboard. Being the leader of the series with a two-point lead ahead of Paolo Brescia’s Melgina before the final event in Trieste, but missing their tactician Karlo Hmeljak in the crew in the final battle, finished the season 11.5 points behind the winner as a runner-up.

The overall podium is completed by the Corinthian champion of the 2021 series. Michael Tarabochia's White Room, steered by Luis Tarabochia was replicating the result of 2018, holding now for one year the Melges 24 European Sailing Series Corinthian Trophy.

Luis Tarabochia, the helmsman of White Room was thanking his crew of tactician Sebastian Bühler, father Michael Tarabochia, brother Marco Tarabochia, Marvin Frisch and Mathy Thomas, who helped to achieve this result. “Comparing to the last year influenced by Covid-19, we were happy to have a higher participation in all events, we experienced nice venues and good weather and all in all we are very happy being the best Corinthian and third in overall ranking!”

The trophies and medals of the Melges 24 European Sailing Series 2021 were awarded by Miles Quinton, IM24CA Vice Chair of Europe, who thanked all fifty-one teams from fifteen nations that joined the circuit this season.

Top 3 in Corinthian division of the Melges 24 European Sailing Series 2021:

Tight battle to finish the Melges 24 regatta in Trieste

The last day of Melges 24 regatta in Trieste was showing to the sailors some heavy rain and lack of wind in the morning, but at the end, two nice races were managed by the PRO Dario Motz. The battle for the win was really tight on top. The victory of the first race of the day went to Alberto Venuti’s Skoropios and White Room of Michael Tarabochia wins the final race in Trieste.

Melgina was the leader starting the final day with a one-point lead ahead of Richard Thompson’s Black Seal, from UK, steered by a local Stefano Cherin. Black Seal scores 5-2 and Melgina 3-6, which makes them tied on points at the end of the regatta, but better placement on the final race secures the victory to Stefano Cherin steering Richard Thompsons’s Black Seal with Nigel Young, Andrea Tesei, Ewan O'Keefe and Sara Zuppin in the crew.

Stefano Cherin was really happy that Black Seal was able to finish the regatta on the first position in Trieste. “We enjoyed a lot and I would like to say thank you to Richard Thompson, who gave me this opportunity to helm his boat, everything was fine and we were also lucky to have some nice breeze to manage eight races to do our performance!” Nigel Young added, that it was a great fight in Trieste, where 4-5 teams were very close to the top. “Stefano is a fantastic tactician and helmsman, and being from Trieste, and we had a little bit of home advantage and a little bit of local luck we managed to pull it off, so it was fantastic!”

Some of the Melges 24 fleet now stay in Trieste to be part of the particular events like Barcolana One Design and Barcolana by night during the Barcolana week and some boats move also to Croatia, where in October and November two more Melges 24 events, including the inaugural Melges 24 Croatian Nationals, will be held in Split.

The final event of the Melges 24 European Sailing Series 2021 and Italian Melges24Tour was hosted by the Società Triestina Sport del Mare - ASD, in co-operation with Melges 24 Gulf of Trieste group, Italian Melges 24 Class and International Melges 24 Class Association. Huge thanks goes to the Società Triestina Sport del Mare - ASD managed by Guido Benci and the entire regatta management team led by Simone Viduli and Alan Travaglio for their excellent hospitality and wonderful management of the regatta. Also, a special thanks goes to Davide Rapotez, the owner and helmsman of Destriero ITA579, who's time and huge efforts have been behind the growth of the Melges 24 fleet in Trieste area.

After the winter the European season will resume in 2022: dates and venues of the entire series are under the discussion and will be announced shortly, but the most prestigious event of the year - 2022 Melges 24 Worlds will be held in Fort Lauderdale, hosted by the Lauderdale Yacht Club on May 9-15. 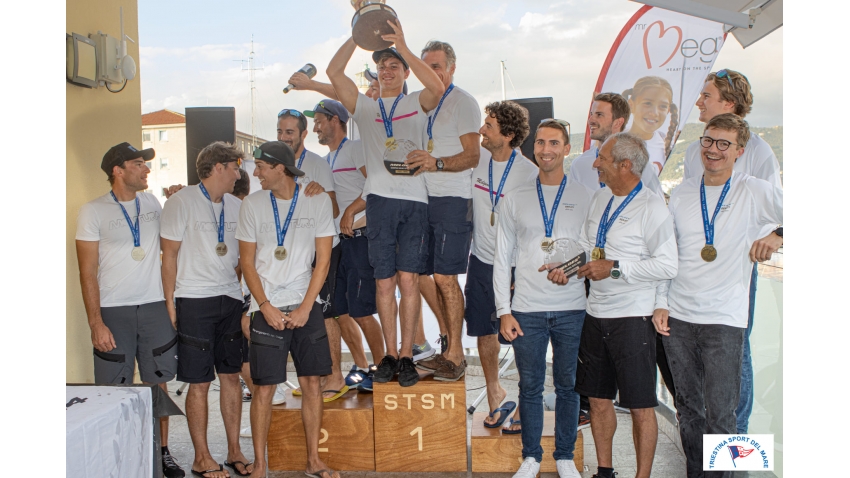 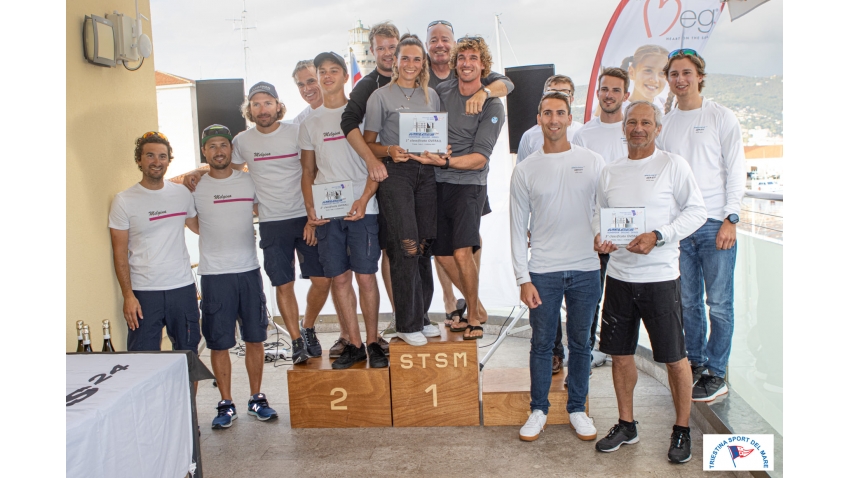 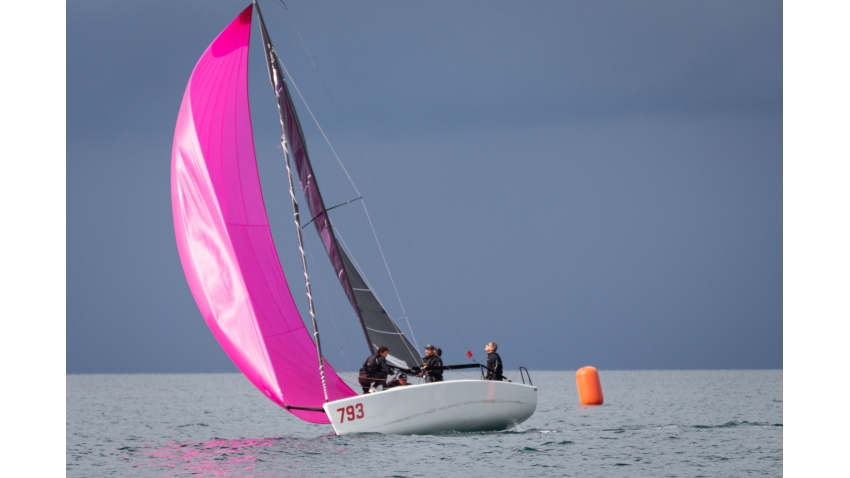 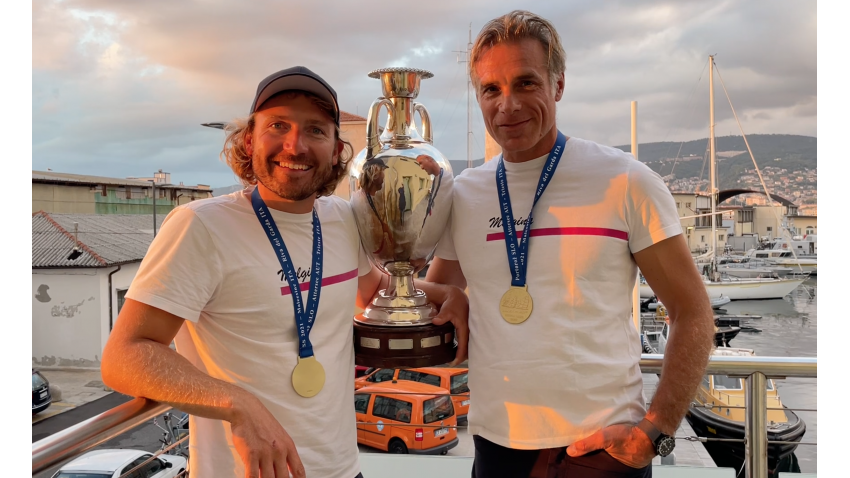 Paolo Brescia and Simon Sivitz of Melgina ITA793 with the perpetual trophy of the Melges 24 European Sailing Series 2021 - Trieste, Italy 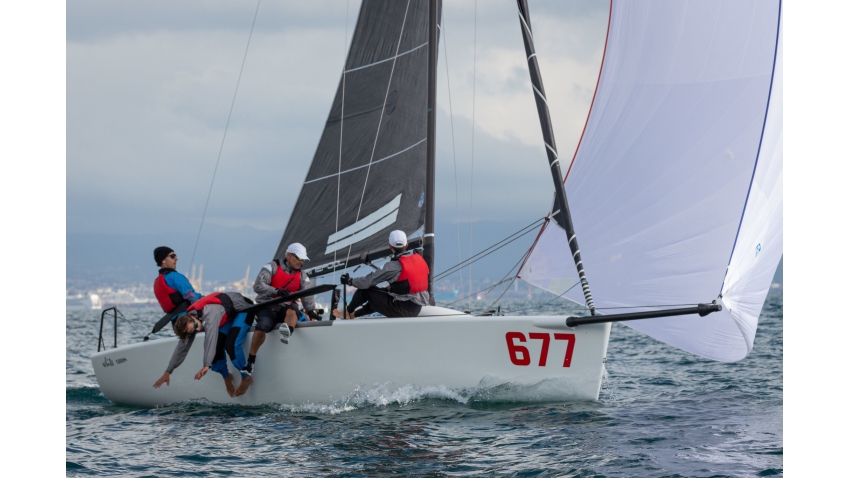 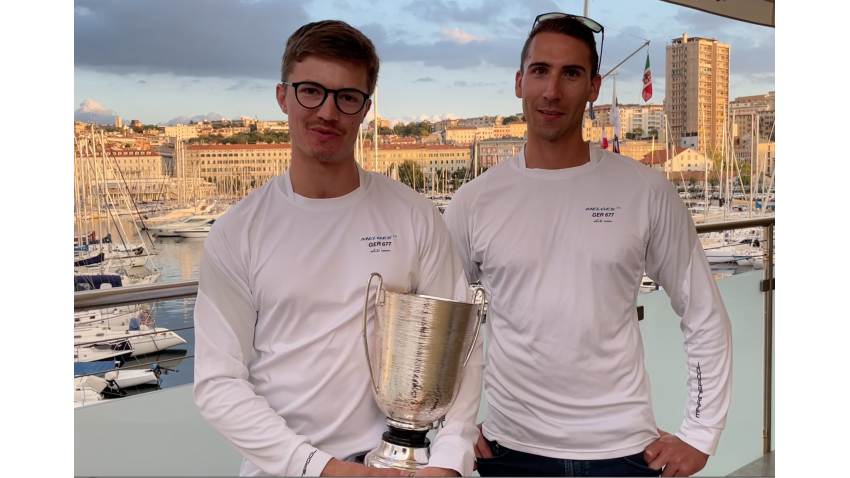 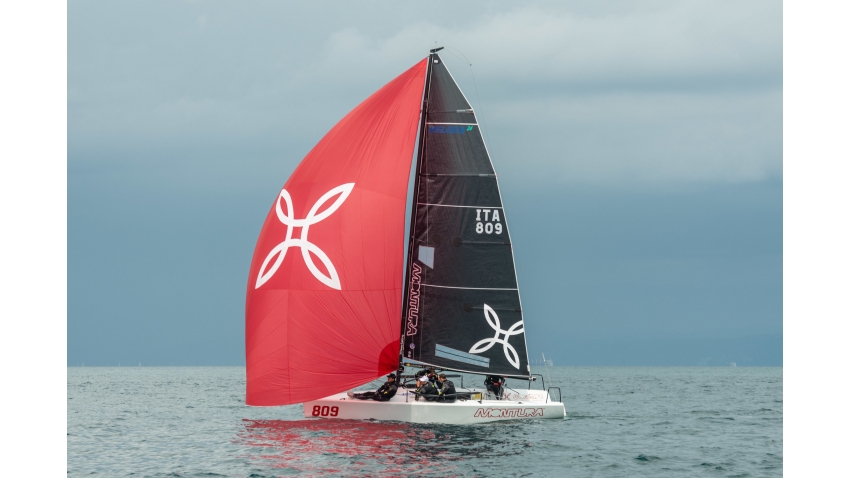 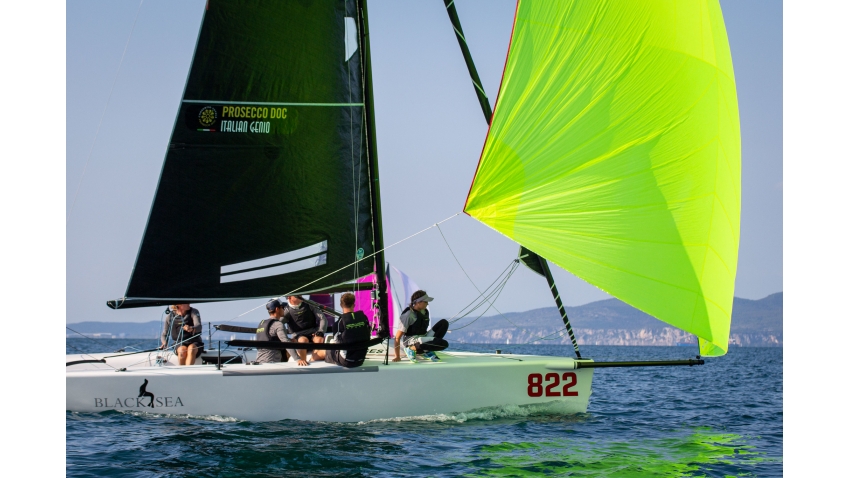 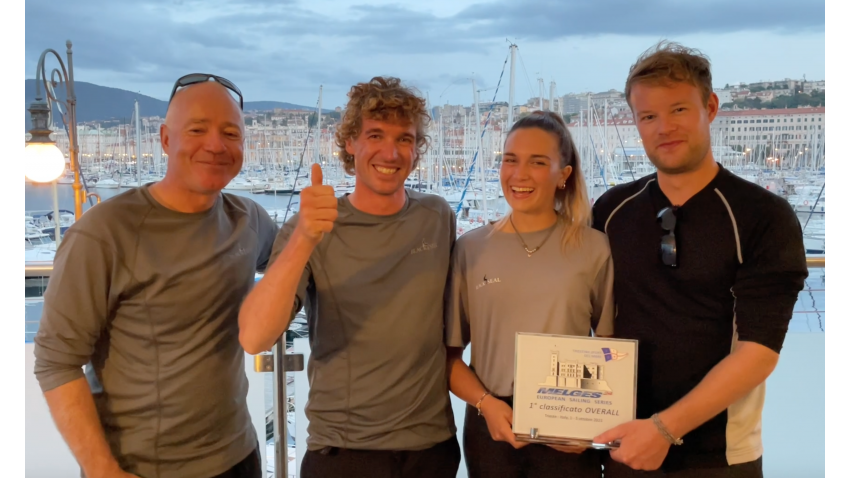 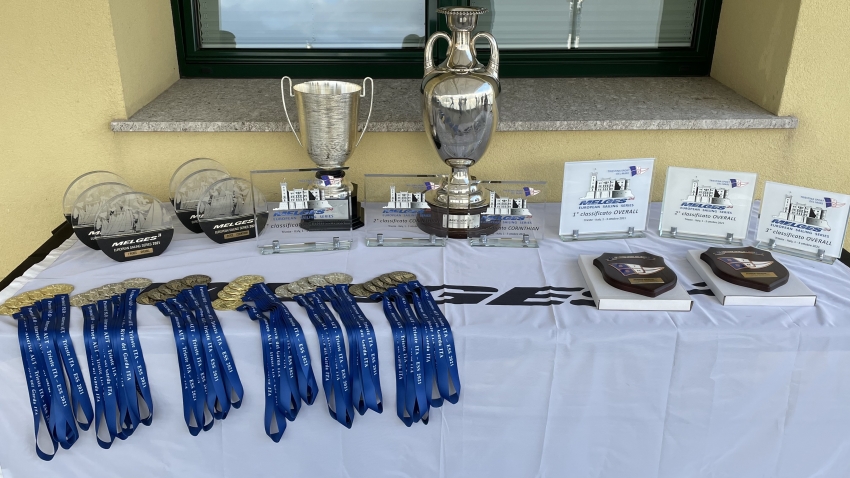 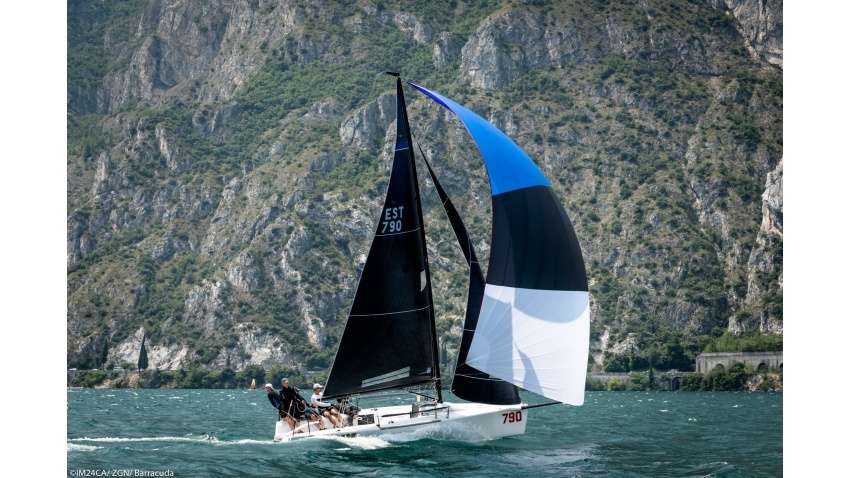 The second on the Corinthian top 3 is a 2021 Melges 24 Corinthian European Champion, Tõnu Tõniste’s Lenny from Estonia, being sixth in the overall ranking 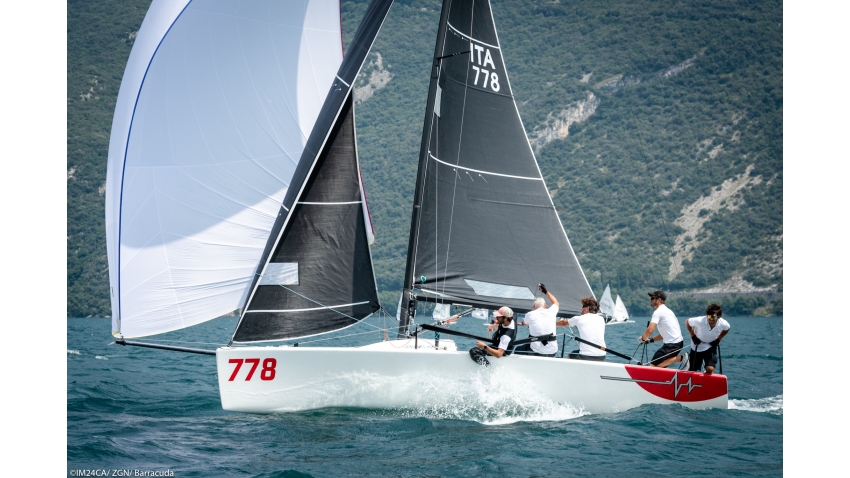 The Corinthian podium of the 2021 Melges 24 European Sailing Series is completed by the 2019 Corinthian winner of the series, Marco Zammarchi’s Taki 4 from Italy steered by Niccolo Bertola, ranked as eight in the overall