January 19, 2023 - IM24CA - The International Melges 24 Class is thrilled be celebrating 30 Years of racing the Melges 24. We are excited to be reflecting on historic milestones, but also looking ahead to a very bright future for our Class. Our greatest hope is that all Melges 24s worldwide — every fleet, every boat on every continent will join us for this big year-long celebration by attending as many fantastic regattas that you can!

Introduced in 1993, built by Melges Performance Sailboats and designed by Reichel/Pugh, the Melges 24 experienced instant success. It was awarded Sailing World Magazine’s prestigious Boat of the Year in 1994. And by 1998, the Melges 24 became massively popular in the U.S. and across Europe resulting in its first World Championship taking place in Torquay, UK.

“After a successful 1992 Americas Cup campaign, Buddy Melges and his team alongside American yacht designers John Reichel and Jim Pugh, produced what would become and still remains the premier one-design sportboat in the world. The Melges 24 has stood the test of time, and 30 years later it is as relevant as it was in 1993,” says current U.S. Melges 24 Class President, Megan Ratliff, owner of Decorum, USA-805.

“Its high aspect foils and large sail plan coupled with its simple deck layout makes the boat easy and fun to sail. The ability to trailer low behind a station wagon, and ramp or hoist launch makes any venue appealing. Its hull shape makes it exciting in large ocean swell and exhilarating on the flat waters of the inland lakes of the Midwest.”

“Close to 900 boats have been produced worldwide and there are currently active fleets in 25 countries. This Class draws sailing’s top professional and amateur talent which continue to drive the class forward. It’s an amazing boat that will undoubtedly continue to be the premier one-design for decades to come,” continued Ratliff.

In celebration of the Melges 24’s 30th Anniversary, the U.S. Melges 24 Class developed a M24@30 logo to mark the milestone. It symbolizes a modern stance on sportboat racing, and represents this iconic boat and all the people, past and present, that have made it the ultimate ‘it’ boat. Celebrating 30 Years of Racing the Melges 24.

Throughout 2023, the USM24CA and IM24CA will be telling the story of the Melges 24 as we work our way up to the U.S. National Championship happening at its birthplace in Lake Geneva, WI on October 6-8. This is the exact place where its ultra coolness, innovation and cutting-edge sailing concepts met the surface of the water for the very first time.

We want you, Melges 24 owners and sailors all over the world to come sail with us in 2023 as we commemorate the year-long occasion, but we also want you to help share the story.

The Melges 24 is so much fun to race and the competition is fierce, but win or lose, it is an experience you don’t easily forget. In fact, it leaves you wanting more. Sailing and racing it with your best friends, family or with some of the greatest sailors on the planet and you have an experience that is unlike any other. We want to hear about the funnies, the ups, the downs, the memories, the glory and the triumphs. Click Here to Share and Tell Your Melges 24 Story.

The Class is also happy to share the M24@30 logo so you can add it to your team gear, websites and social media channels for the 2023 season. Join us in celebrating the Melges 24! Request the Logo File. 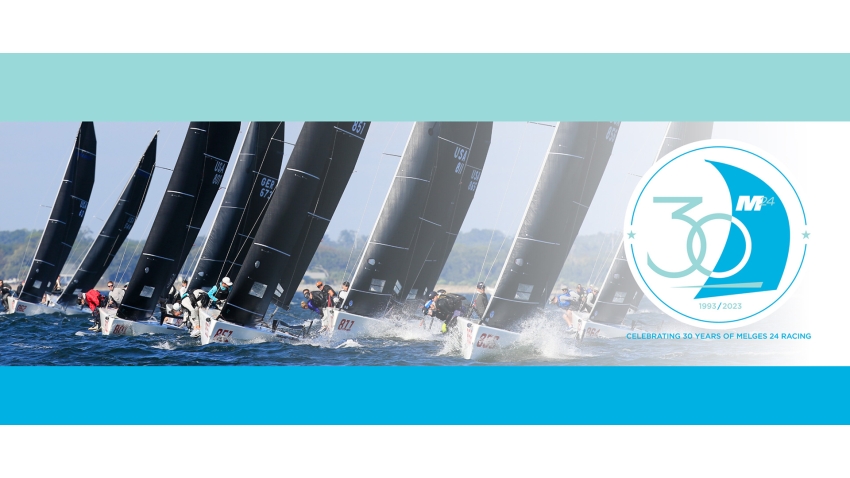