With an entry list bulging with some of the very best international sportsboat teams in the world, the 2011 Melges 24 World Championship hosted by the Corpus Christi Yacht Club, Texas is set to be one of the most closely fought in the class's history. In keeping with the tradition of Melges 24 World Championships, this year's event which runs from 11 - 21 May, has attracted a top quality international field with entries from Australia, Bermuda, Canada, France, Germany, Ireland, Italy and the USA.

The breezy conditions which generally prevail in Corpus Christi are a perfect match for the high performance Melges 24 Class, and there is already a general mood of anticipation amongst the sailors - not least about the potential for some high speed downwind sleighrides. George Peet, sailing this week with foiling Moth legend Bora Gulari on Airforce 1, confessed to be hoping for some big breeze. 'We were here for some training a few weeks ago and it was blowing twenty-five knots the whole time. It was just fantastic fun. Can't wait for more of that."

According to Principal Race Officer Mark Foster, weather conditions are set to be close to perfect for the main world championship series. "The thunderstorms that are rumbling around the area right now are forecast to clear out over the next 48 hours and we should then see a return to the classic Corpus Christi wind conditions. 15 - 18 knots is typical in the early afternoon with the possibility of 20 knots plus in the mid to late afternoon. The added bonus is that both the air and sea temperatures are predicted to be around 80 degrees Fahrenheit."

The high quality fleet boasts many of the top international Melges 24 teams, including the reigning champions, Italy's Uka Uka Racing, who will be hoping to repeat the form which saw them clinch last year's world championship in Tallinn, Estonia with a race to spare. Speaking shortly after successfully completing their crew weigh-in this morning, tactician Jonathan McKee said that the mood amongst the crew was very upbeat. "We have exactly the same team as last year and we are looking forward to what promises to be a great regatta. Having just arrived, we are planning to do plenty of sailing over the next four days to familiarise ourselves with the conditions here is Corpus Christi. Our first priority is to make the choice on what sails we are going to use. Although it is generally always quite windy here, I think there is a chance we may actually get a range of conditions for the series."

The Uka Uka Racing lineup is certainly not lacking in pedigree - McKee along with owner Lorenzo Santini, and helmsman Lorenzo Bressani are each double Melges 24 World Championship winners and their trimmer Federico Michetti has no less than three class world titles to his name. According to McKee however, these statistics will have little bearing on their strategy this week. "We won't be thinking about that. You just have to put that all aside, prepare well, hope things go your way when you are on the water, and then it's a case of, come what may."

International Melges 24 Class Chairman Riccardo Simoneschi, who will be helming Audi this week, had this to say "As a competitor I am very much looking forward to this regatta. Corpus Christi is well known as an exceptional sailing venue and has really brought out the cream of the crop. The quality of both the professional and amateur teams competing here this week is very high and we are expecting the racing to be fantastic. The club and its team of volunteers have been planning this event for nearly three years and we really appreciate all of the hard work they have put in to make this year's world Championship a success."

Interviews with Nathan Wilmot and Ricardo Simoneschi on the eve of the 2011 Melges 24 Worlds main series.

Following successful completion of registration and measurement, the teams will get their first chance to measure up against each other over a two day Pre-Worlds regatta this weekend, before the 2011 Melges 24 World Championship Opening Ceremony takes place at the Corpus Christi Yacht Club on Sunday evening. The twelve race World Championship Series begins on Monday 16 May and runs through until Saturday 21 May with two races scheduled per day.

You can keep up with all the latest news and developments from the 2011 Melges 24 World Championship via www.melges24.com and the event website.

The 2011 Melges 24 World Championship is sponsored by:- 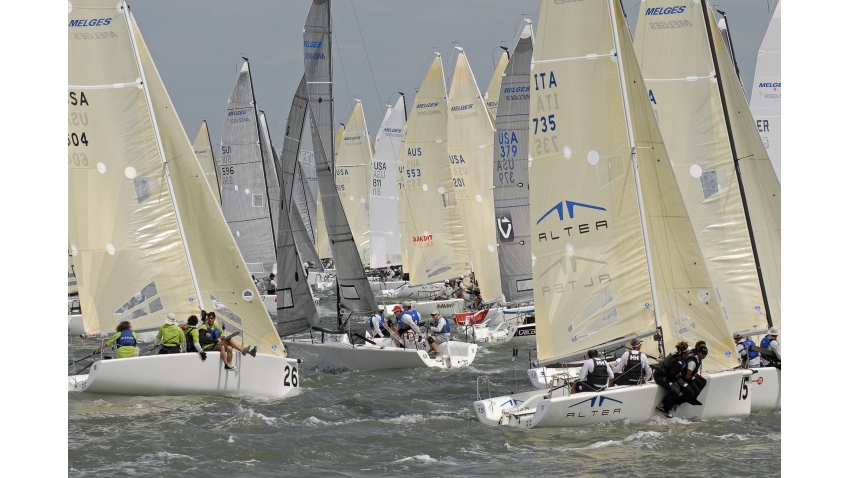