October 5, 2021 - Victoria, BC, Canada - The 2021 Melges 24 Canadian Championship was held October 1-3, 2021 at Royal Victoria Yacht Club as part of the Thermopylae Regatta. here's the summary day by day by the Canadian Melges 24 Class Association.

The 2021 Melges 24 Canadian Championship came to a conclusion Sunday, October 3, with another four races sailed in perhaps the trickiest conditions of the contest.  The wind was a slowly weakening 5-8 knot west-southwesterly, a direction which pushed the course further out into stronger and unpredictable flood currents churned up by the many rocks and islets off Oak Bay.

Sunnyvale didn’t falter under pressure to claim the overall win. Fraser McMillan and crew, Aidan Koster, Alex Levkoskiy and Chris ‘Shaka’ Vassallo put on a masterclass picking their way through the light and challenging conditions to claim three firsts and a third.  Mike Bond and crew aboard Recidivist finished the event second overall and claimed the top Corinthian prize.  Duncan Stamper & Mark Malleson’s Goes to Eleven crew wrapped up the series in third overall and second Corinthian with Phil Harland’s PCH rounding out the Corinthian podium in third, fourth place overall.

A big shout out to the regatta organizers, led by co-chairs Evan Carey (also crewing aboard Rich Mundell’s Psyclone) and Corinne Whelan, for putting on a fantastic event both on and off the water.  The COVID friendly Greek themed buffet dinner on Saturday evening was a hit punctuated with sightings of several toga wearing patrons.  Thanks to host club and sponsor Royal Victoria Yacht Club, and additional sponsors UK Sailmakers Northwest, Trotac Marine, Gyro Beach Board Shop, Hoyne Brewing Co. and Roberts Composites, the latter of which donated some beautiful Melges 24 carbon keelsavers and an instrument mast mount.

And finally, a huge thanks to the race committee, ably led by PRO Leigh Anderson, who managed to hold an amazing fifteen fair races in the light and sometimes tricky conditions.

Sunnyvale again tops the overall standings at the conclusion of the second and penultimate day of the 2021 Melges 24 Canadians.  Fraser McMillan’s crew are locked in a battle for first with Mike Bond’s Recidivist, who took the overall lead for a short time during the day, and has whittled down the lead to just two points.  Seven races were held in a stable but light onshore 5-8 knot breeze, with slight oscillations, velocity gradients and current making the racing ever challenging.

Goes to Eleven, apparently stuck in third gear, remains in a solid third with a string of thirds with the occasional fourth and second.  Rounding out the results is Phil Harland’s PCH in fourth and Rich Mundell’s Psyclone in fifth with three points separating the two.

Lighter winds forecast for today so hopefully a few more races to decide the final standings.

Day one of the 2021 Melges24 Canadian Championship is in the books with four races sailed in a light and shifty 6-10 knot northerly.  A small but competitive fleet of five hit the starting line with reigning North American Corinthian champion Sunnyvale sporting a new ride, the 2018 Corinthian World Champion boat, proving to be the boat to beat with a 1-2-1-2 scoreline.  Mike Bond’s crew aboard Recidivist is lying in second overall on 10 points with team Goes to Eleven rounding out the top three.

The organizing committee was planning on hosting a fleet in the low teens however the challenge of getting to the event in these unpredictable pandemic times proved a detriment, especially for our active US fleet in the Pacific Northwest.  A shout out to Dave Brede and crew for making the effort and towing 12 Happy Thoughts as far as Port Ludlow before storm forecasts and expiring COVID test sent them back home.  And a big thanks to Phil Harland and crew aboard PCH for making the trip across the straight from West Vancouver. 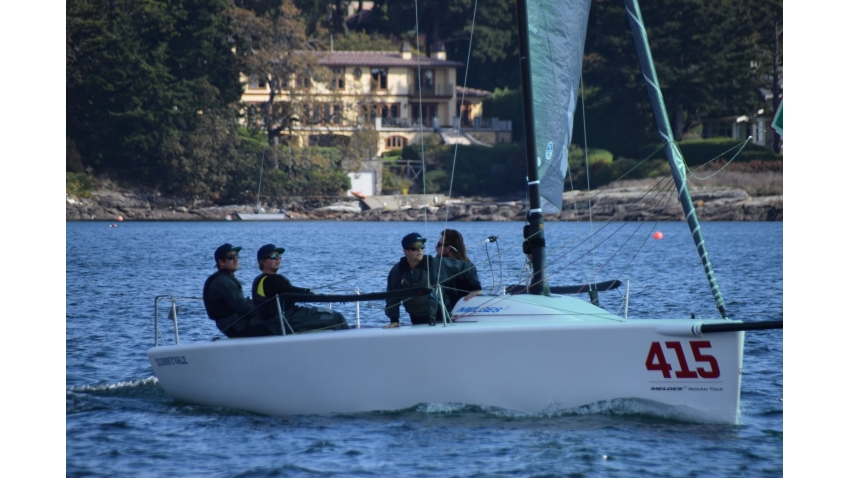 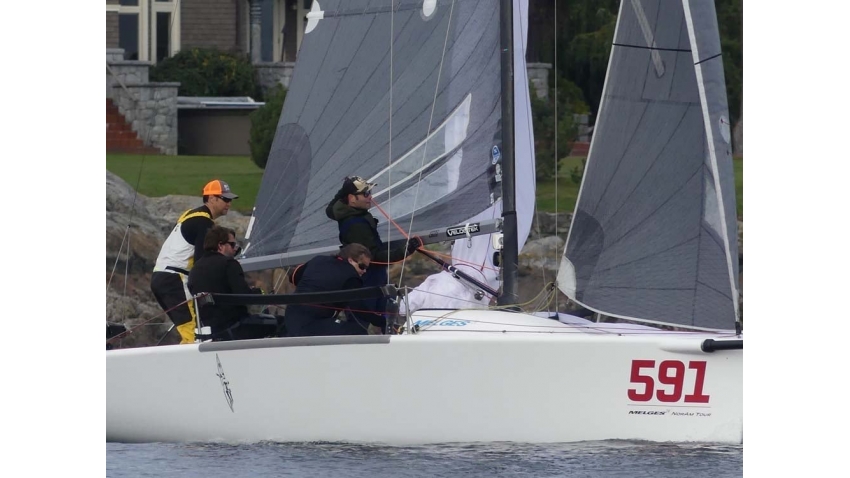 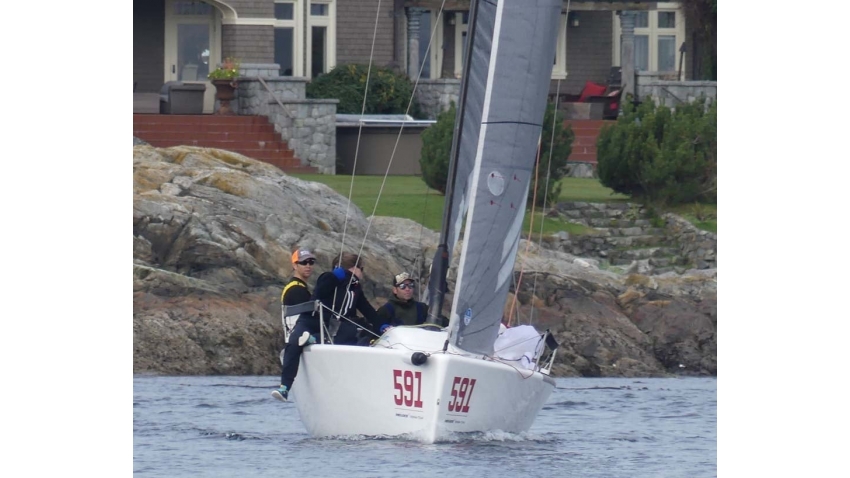 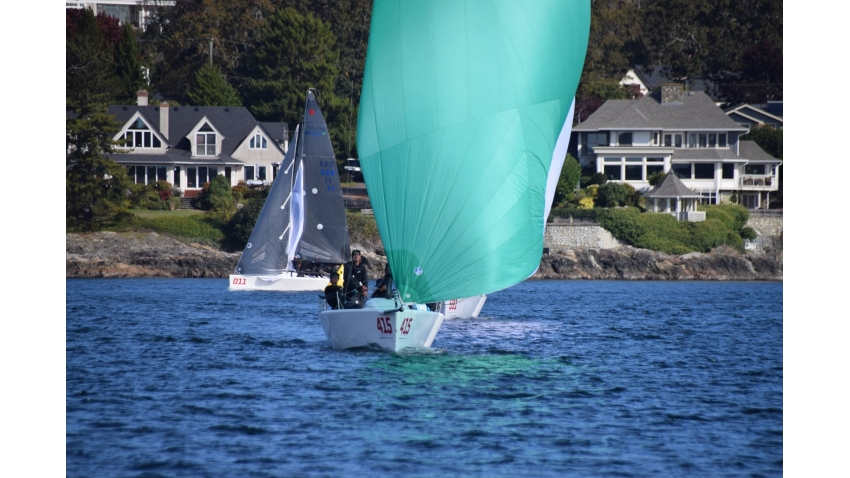 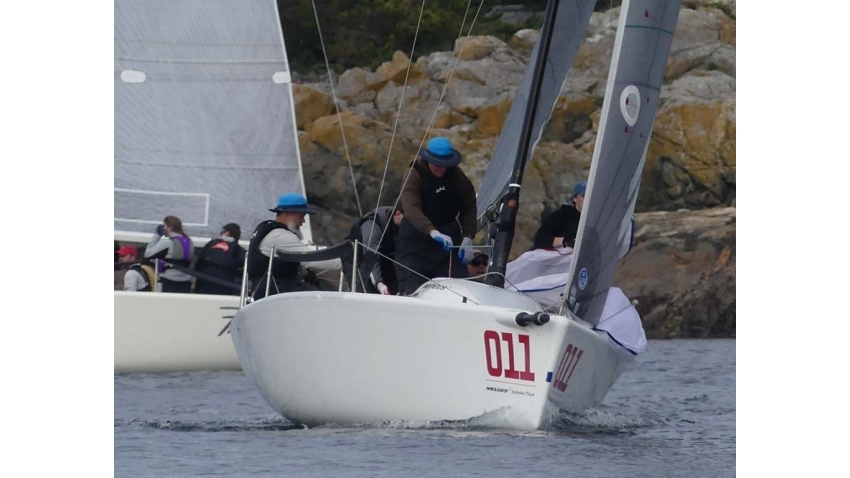