July 21, 2016 - Haven Ports, UK - The Onesails 2016 Melges 24 UK Nationals were once again held at Haven Ports Yacht Club from 8th to 10th July alongside Felixstowe Regatta. Following on from last year's success, a total of ten teams entered which was an improvement on the year before.

After weighing in was completed, competitors were greeted with a briefing from the weekends PRO, Peter Martin and the Felixstowe Regatta race committee. The plan was clear, a ten race series was scheduled to take place over three days in Dovercourt Bay - just outside Felixstowe Port - in a forecast that was predicted to range from 13 to 25knots over the three days.

With five races planned for day one of the 2016 OneSails Melges 24 Nationals, the first day was always going to be a challenge for the teams. With a relatively and predictable west-southwest breeze, competitors were torn between heading right for flatter water or working the shifts up the left and making use of the increasing tide. Putting one finger on the title immediately was John Parkers Chien Noir who demonstrated some great pace to take an early victory from Tom Brantons team S&M.

As the teams got into their stride, it was time for another team to take a win and this time it was Ben Stone's team Why Knot who were able to take race wins in races 2 and 3. The team was able to find good pressure on the downwind legs allowing them to make big gains. Coming second in the second and third race was Patrick Wilton's team Yikes who also demonstrated a huge amount of pace on the downwind.

The breeze continued to increase throughout the day and with that came the first casualties of the day, S&M and Slot Machine who between them were able to break a halyard and finger.

Race four started with a slight hesitation from the race committee who opted to postpone the start mid-sequence as the breeze pushed above the class limits. Holding on for a few more minutes, the breeze began to settle down again and the committee was able to continue with the fast paced series. Continued form was seen from Yikes and Why Knot who were both able to take another bullet in races four and five.

After day one of the Melges 24 Nationals, it was Why Knot that headed up the results board going into day 2. This result made them winners of the John Merrick's memorial trophy which goes to the team with the best set of results on the opening day.

Upon arriving back in the M24 berthing areas, teams were greeted by an awesome OneSails sponsored gin and tonic reception on the pontoons. With all the teams desperately needing to 'rehydrate', the drinks continued on until the floating bar was dry. For those keen to carry on, hospitality continued on the famous Haven Ports Yacht Club Lightship, where fish and chips were served along with the equally famous local Adnams beer.

With several of the teams nursing sore heads from the night before, it seemed there would be no let up as another gruelling day of 17-24knot winds were predicted from the SW. True to form the weather gods were indeed correct. Revelling in these conditions and keen to show a fight after the previous days problems, it was "S&M" that took all three bullets. Behind them it was a battle for the runners up positions between Chris Dawson's team New Tricks, Chien Noir, Yikes and Why Knot.

Once race 8 was out of the way, teams headed back to the Marina to the prospect of crew burgers on the foredeck of the Lightship and happy hour. Enjoying their cold pint of Adnams the most was the team of Why knot who were going into the third and final day of racing at the top of the results board.

On the final day the teams were greeted once again by another tough forecast, but this time it looked even bigger and better than the previous day leaving question marks over whether racing would take place at all. Consequently, there were a few nervous faces as the teams gathered for their freshly cooked bacon rolls and coffee at the dockside. True to form, the PRO started the fleet on time and was able to complete both races before the increasing wind was able to cut things short. Coming out on top in the last two races was Why Knot who sealed the overall title with two bullets on the final day. Behind them it was S&M who took the runners up positions in both races, allowing them to climb up the results board into third overall.

Doing enough to take second overall was Yikes. A place behind it was all change as S&M were able to claw enough points back to take third place overall from Chien Noir. 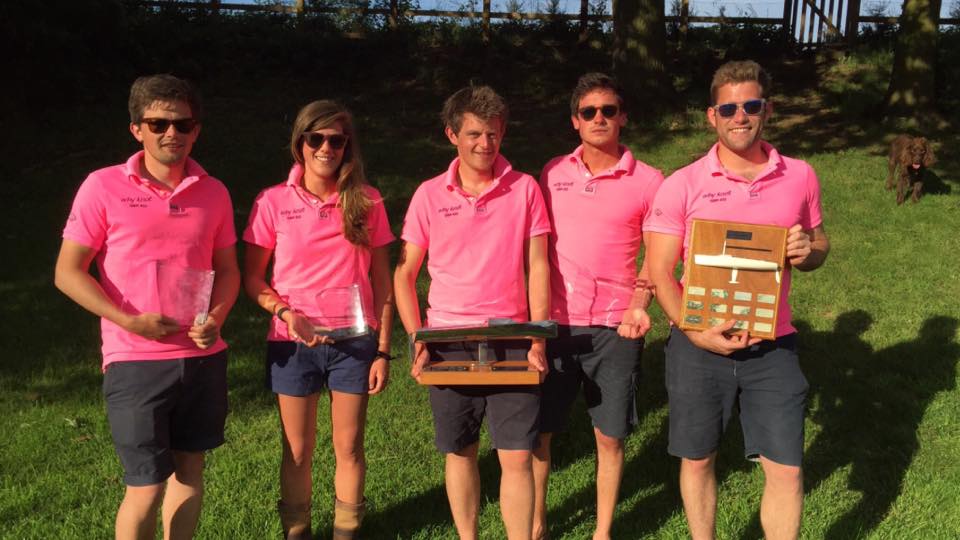 Overall Results:
If you took part in the Melges 24 nationals then enter your Gear Guide information here

A huge thanks must go to the title sponsors OneSails and supporting sponsors Suffolk Yacht Harbour, East Anglian Sea School and Adnams. Without them it wouldn't have been possible to run such a great event.

To keep up to date with all UK M24 class news and event information, please stay tuned via the UK class Facebook page.