October 6, 2016 - Luino, Italy – 2016 Melges 24 European Sailing Series will come to an end in Luino, Italy this weekend with the 13th edition of the Lino Favini Cup (Coppa Lino Favini), considered also as the Melges 24 Swiss Open Championship 2016 and the 4th Act of the 2016 Melges 24 Italian Series. The final regatta of the European season is organised by the Associazione Velica Alto Verbano (AVAV) in collaboration with International Melges 24 Class and Melges 24 Italian Class Associations.

At stake will be the trophy dedicated to father of Flavio Favini, who himself is 2007 and 2013 Melges 24 European and 2014 Melges 24 World Champion. Also, perpetual trophies of the Melges 24 European Sailing Series, in hold of 2015 winners Gill Race Team GBR694 and Corinthiam team Marusia UKR819, will be given to the hold of the 2016 series' winners there.

Around twenty teams coming from eight nations will end their European season on the Lake Maggiore waters off Luino. Twelve of the competing teams are currently ranked among the Top 15 of the European Sailing Series; in both divisions top five teams will be challenging except Eelco Blok’s Team Kesbeke/SIKA/Gill from Netherland, currently ranked as third in Corinthian division and eighth in overall ranking. Miles Quinton’s Gill Race Team with three-time Laser SB20 world champion Geoff Carveth helming is currently leading both the overall and Corinthian ranking for the European Sailing Series, but the competition is very close overall with Andrea Rachelli’s Altea from Italy. At the same time we will see a battle for the third position to complete the podium as both for David Rowen’s Imagine from Great Britain and Michael Tarabochia’s White Room the chances are open for that. 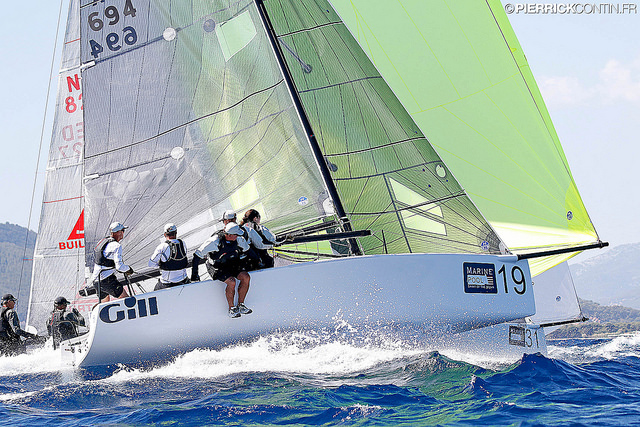 In the Corinthian series the same close competition for Gill Race Team is on with White Room, which will lead to a dramatic finale to the series. In absent of Ronald Veraar’s helmed Dutch Team Kesbeke/SIKA/Gill the chance for the third podium place is open for the 2015 series’ Corinthian winner, Oleg Dyvinets’ Marusia from Ukraine.

Off the European series Top 3 ranking some of the best teams in the class will be challenging such as reigning European and World champion, Christopher Rast’s EFG from Switzerland this time with Italian crew and Carlo Fracassoli in helm; the vice European champion and the winner of the Kiel Week, Bombarda from Italy helmed by Andrea Pozzi with Giulio Desiderato as tactician; Corinthian European fourth team and the winner of the 2nd event of the series, Taki 4 with Niccolo Bertola-Giacomo Fossati’s team from Italy. Among competing teams we will see also Kalman Rozsnyay's FGF Sailing Team with Robert Bakoczy in helm and made a great performance at the Marinepool Melges 24 Europeans in Hyeres; and Akos Czolto’s Seven-Five-Nine with Olympian Finn class sailor Zsombor Berecz in crew, both teams from Hungary.

Racing will start this Friday and concluding on Sunday for a total of eight races and a discard coming into effect after six races completed.

Five events have been completed from the 2016 Melges 24 European Sailing Series so far: first in Portoroz, Slovenia in April, second on Lake Attersee, Austria in June; third in Kiel, Germany in June; fourth in Riva del Garda, Italy in July and the most important competition of the European sailing season – Marinepool Melges 24 European Championship in Hyeres a month ago. After the Lino Favini Cup in Luino the Melges 24 class is looking forward to the main event of the year, the Melges 24 World Championship in Miami that will take place from November 26th to December 3rd.