28 Melges 24 teams from 9 different countries found their way to the Kieler Woche – the biggest sailing event in the world. For the Melges 24 class the Kiel Week was the 3rd event of the Melges 24 European Sailing Series 2014 where the teams were picking points to their current rankings.

The first day started with strong wind and big waves. It was the Audi Tron ITA-840 team with Riccardo Simoneschi in lead which set the pace and won the first two races. The PRO of the Foxtrot racing area had mercy with the Corinthians (Pro Am) and didn't start a third one that day.

The weather forecast for the second day predicted more wind gusts up to 35 knots and higher waves. Due to this reason AP was displayed and at 2 p.m. all races for the day were postponed. The race officer tried to give a chance for the Melges 24 class to race on area TV but the Olympic classes had the priority.

Third day of the regatta started the same as the day before, but with a chance of dropping wind speed. Finally the Melges 24 fleet has been sent out and completed three great races with slowly dropping wind. Kim Christensen on Softice DEN-782 won the 4th race and Audi Tron was victorious in race 5.

Due to the light wind conditions on the last day of the regatta, the Race Committee was only able to start two races in tricky conditions. Kim Christensen and Softice won the first race of the day and Martin Trcka on Margarita CZE-704 was the best in the last race. 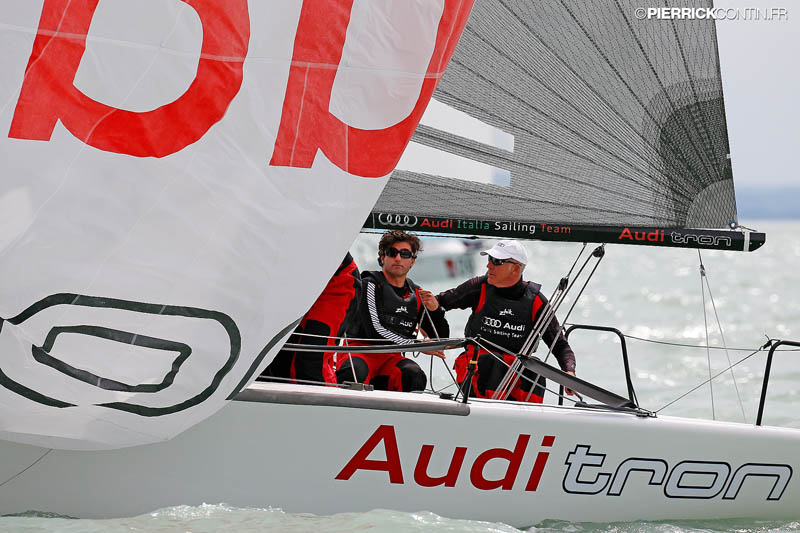 After completing 7 races with one discard Riccardo Simoneschi on Audi Tron ITA-840 including Stefano Orlandi, Lucia Giorgetti, Enrico Fonda and Federico Buscaglia in his team won the regatta with 8 points in total. Kim Christensen on Softice DEN-782 was 2nd losing 3 points and John den Engelsman’s team from the Netherlands (NED-645) was following with 27 points in total as third.

The current standings of the Melges 24 European Sailing Series will be calculated shortly, but with the victory of Kiel Week Audi Tron most probably will take the lead in Pro division as the current leader Altea ITA-735 did not race in Kiel.

The 4th event of the Melges 24 European Sailing Series 2014 will start in a week already – on June 2nd at the most fabulous sailing place in Europe - Lake Garda!
Last entry date for the Garda event is June 30th! Make sure to be there and pick the points to the European Sailing Series ranking! 21 boats on the entry list as of June 25th.

The Notice of Race is published and please feel free to contact either the IMCA, the Italian Class or the club Fraglia Vela Riva del Garda for more info and support.