Today’s final race of the Ocean BMW Melges 24 European Championship in Torquay was the most exciting yet in what has been an absolutely gripping regatta. Three boats were in serious contention – Andrea Racchelli sailing Altea (55 points), Gabrio Zandona sailing Joe Fly for Giovanni Maspero (56 points) and Stuart Rix sailing Gill for Quentin Strauss (62 points) – and from the opening moments we knew we were in for a battle royal.

For the first time all week the wind was up at around 14 knots from the west and by the start initial rain had given way to broken sunshine. PRO Peter Rumbelow and the Royal Torbay’s excellent race committee got the fifty competitors away at the first attempt and from the gun it was Gill that took control. Altea had a terrible start and their grip on the title was disastrously loosened at that moment. Joe Fly again went for the conservative approach and managed a moderate though not glowing start.

At the first weather mark it was Gill first from Tim Collins in Easy Tiger with Paul Brotherton aboard Ian Cleaver's Highland Heritage 3rd, Antoine Frickey sailing Benjamin Cohen’s Sogeti 4th, Alba Batzill with Eddy Eich’s No Woman No Cry 5th and John Pollard of Excellent 6th. This leading group got away from the pack where Joe Fly rounded 11th with Altea back in 20th.

At the second weather mark Gill were just hanging onto their lead with Sogeti now up to 2nd followed by Easy Tiger, Excellent, Highland Heritage and No Woman No Cry. Joe Fly had pulled up to 8th putting them just one point behind Gill for the Championship. Back in the scrum Altea was struggling and rounded 22nd with no hope left of recovery. The boats took off down wind and with every gybe the positions altered. At the final leeward gate Joe Fly had pulled up into 7th and onto equal points with Gill but their normally impeccable crew work faltered momentarily and the kite ended up under the boat loosing them valuable seconds and giving Gill a brief breathing space. Despite this potential disaster Joe Fly’s crew rapidly had the situation back under control and she was off up the beat like a scalded cat.

By the final weather mark Gill were still just holding off the leading group but Excellent had now pulled up into 2nd and was closely followed by Sogeti, Easy Tiger, Highland Heritage and No Woman No Cry. Joe Fly had done an impressive job up the beat rounding back in 7th and still on equal points with Gill as the set off towards the finish.

Knowing they had to gain one more place over Gill to retain the European Crown Joe Fly gybed early. Gill meanwhile had their work cut out trying to hold onto the lead and spectators were kept on the edge of their seats as the leading boats jostled for position. In the closing moments Excellent slid past Gill and they crossed the line 1st and 2nd respectively, closely followed by Sogeti, Easy Tiger, Highland Heritage and No Woman No Cry. Although Joy Fly’s early gybe hadn’t gained them any places they held onto 7th and took victory by just one point with joyous celebrations as they crossed the line for helm Gabrio Zandona and his crew of Daniele Cassinari, Federico Michetti, Monica Ratipoldi and owner Giovanni Maspero.

For the Joe Fly Team this is a particularly sweet victory, as they almost didn’t make the regatta when a sleeping lorry driver wrote off their boat and tow truck as Federico Michetti changed a tyre on the hard shoulder on his way to the regatta. Fortunately Federico suffered only a small scratch and they were able to secure the loan of a replacement boat in time. Although this is Gabrio Zandona’s first Melges 24 European Title his crew were the defending champions, having won the trophy with their previous helm Luca Santella in Helsinki in 2003.

Special thanks must go to the Royal Torbay Yacht Club, whose team has done a spectacular job of organising the regatta both afloat and ashore, to the International Jury led by Tony O'Gorman and to event sponsors Ocean BMW, WKD Original Vodka Blue, Devoti Sailing, North Sails UK Ltd, Westaway Sails and Musto Ltd for their generous support.

The 2005 Melges 24 World Championship will take place at the Ocean Reef Club, Key Largo, Florida, USA from 11 to 16 December. 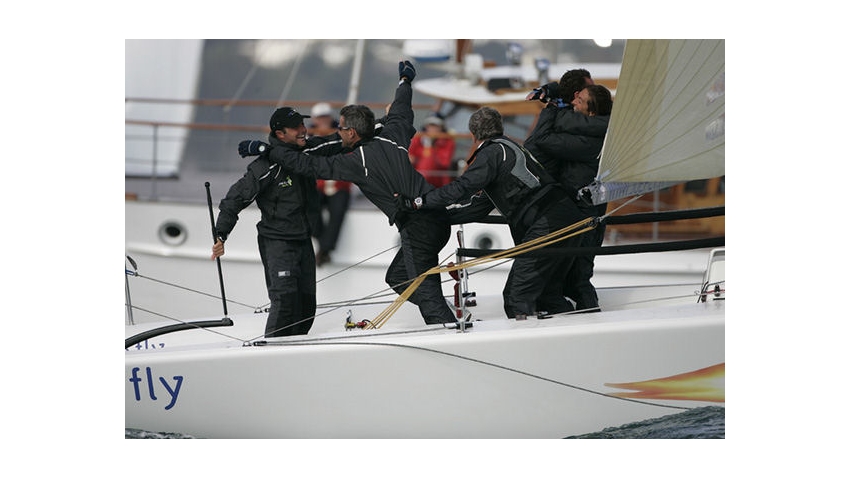