KEY LARGO, Fla., Dec. 16, 2005 – Light weather conditions on the final day of the 2005 Corum Melges 24 World Championship at Ocean Reef Club in Key Largo today turned the 99-boat fleet inside out but James Spithill’s Italian Luna Rossa team held on to a diminished lead to prevail with an eight point margin.

The 11th and final race, on flat water with a puffy six to eight knot northeaster, saw Spithill post his worst score of the week, a 27th place caused when he and other boats in the middle of the course were disadvantaged by a 30 degree wind shift that reshuffled the deck for all the competitors.

"With one race today, all we had to do was stay close to Dave Ullman," said Spithill. Ullman, the sailmaker from Newport Beach, California, sailing his Pegasus 505, had started the day in second place but dropped to third at the finish. "We had a 20-boat cushion," Spithill continued, "but the conditions were extremely tough. We got off the start line in good shape but in these light conditions everyone does the same speed, so we stayed in close contact with Dave."

Spithill, the 26-year-old Australian skipper of Italy’s Luna Rossa Challenge for the America’s Cup, was sailing with three other members of his America’s Cup crew, with additional help from 11-year-old Mac Agnese from Ft. Lauderdale, Fla. There was only one Italian passport holder on the sleek white 24-foot sportboat and that belonged to Manuel Modena, a 49er sailor from Italy’s Lake Garda. The other two crew members were American brothers Jonathan and Charlie McKee, from Seattle, Washington.

Both McKees are double Olympic sailing medalists "My relationship with the McKees goes back to Seattle’s One World Challenge for the America’s Cup in New Zealand in 2000," Spithill said. "They are a great couple of guys. You just have to look at their CVs. They’ve done it all."

Agnese, Spithill’s smallest crew member was invited aboard the boat before Key West Race Week to bring the crew up to the maximum permitted weight of 793 pounds. An Optimist sailor from the Lauderdale Yacht Club, Agnese got a week and a half off school in sixth grade at the Sunrise Middle School near Ft. Lauderdale, substituting the class room for on-the-water sailing lessons with some of the world’s best.

Another Italian boat finished in second place overall, as Gabriele Benussi took the final finish gun with his Marrachech Express, from Trieste, Italy. It was a devastating performance from a team that took delivery of their brand new production boat just one month before the event and only sailed together in any Melges 24 for the first practice race just two days before the start of competition. Only two of Benussi’s crew had had prior experience in the class.

"We made a bad start with a 35th place but after that we had a very positive result," Benussi said. "Before we started, I’d have said that getting in the top ten results would be a fantastic result for us. To be second in this company has made us very, very happy."

Ullman, a 59-year-old veteran with numerous world and national championships to his credit, dropped to third on points. "This was by far the best Melges Worlds ever sailed," Ullman said. "We got entries like James Spithill who hadn’t been in the class before and who sail at the top, top level. They did a really nice job. The Luna Rossa guys were pretty much in control. They are good!" more . . .

Corum, the luxury Swiss watchmaker, is an independent, family-owned company producing high-quality hand-finished Swiss timepieces since 1955. For more than two decades Corum has supported sailing events around the world, including the Admiral’s Cup in Britain as an event sponsor and as a team sponsor.

In the 12 years since it was introduced, the Melges 24 has become the world’s leading high performance, one-design sportboat and has held ISAF International Keelboat Class status since 1997. It offers exciting, demanding, exceptionally competitive sailing and attracts top professional and amateur sailors from the around the globe. Over 630 boats are now sailing and an additional 30 new boats are built and delivered each year.

The website for the 2005 Corum Melges 24 World Championship at Ocean Reef Club is www.2005corumm24worlds.com. More information about Corum Swiss timepieces is available at www.corum.ch. The web address for Ocean Reef Club is www.vacationsatoceanreef.com. Registration and Sailing Instructions sponsored by Solution Property Group and Protector Boats. Photographs courtesy of Tim Wilkes at www.timwilkes.com. 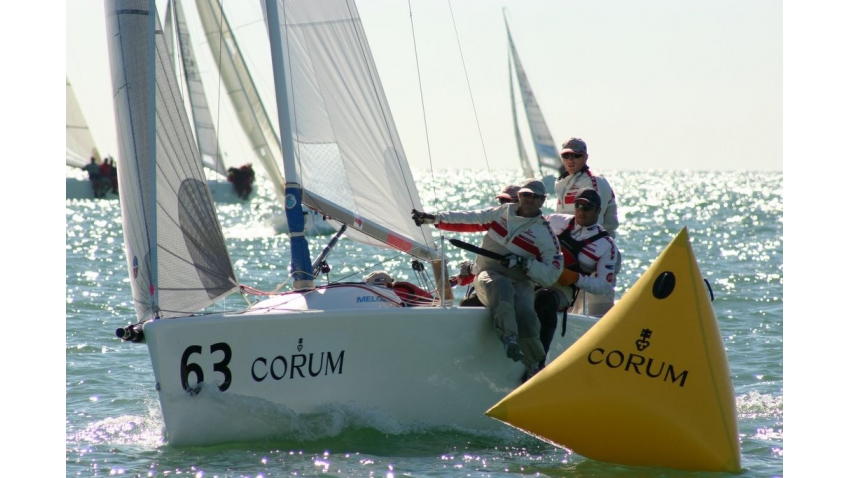