March 25, 2022 - San Francisco, US -  Harry Melges IV (Lake Geneva, WI) and Daniela Moroz (Lafayette, CA) were selected as the 2021 Rolex Yachtsman and Yachtswoman of the Year for their outstanding sailing performance in 2021 at a live ceremony in San Francisco, CA.

Melges and Moroz were awarded this prestigious honor at the St. Francis Yacht Club in front of friends, family, former award winners, and sailing journalists. The winners were presented with specially selected Rolex timepieces.

A huge congratulations is also in order for Melges 24 Owner Laura Grondin, and sailors at large: Taylor Canfield, Erik Shampain and Dave Hughes as they were also nominated for this US Sailing’s prestigious Rolex Yachtsman and Yachtswoman of the Year award.

Harry Melges IV – US Sailing’s Yachtsman of the Year

Winning his first-ever Rolex Yachtsman of the Year award, Harry Melges IV brings a vast amount of experience to the table for his young age. In 2021, Melges was a two-time E Scow National Champion (the rescheduled 2020 nationals were sailed in 2021), Melges 24 Gold Cup winner, and a member of the winning IC37 East Coast Championship crew, among others.

“Winning this award is such an honor to me, since my grandfather won it 60 years ago,” said Melges. “I’ve worked hard this season and I am so glad to be able to take home this trophy.”

Growing up around such accomplished sailors (his grandfather, Harry “Buddy” Melges, won Olympic gold and bronze in the Soling and Flying Dutchman), it was only natural that Melges got an early start. He began racing at age six, hitching rides on the assortment of Scows sailed on his home waters of Lake Geneva, Wisconsin.

Besides his experience in Scows and sport keelboats, Melges was also a member of the US Sailing Team. He campaigned for the 2020 Olympic Games in the 49er with fellow Wisconsinite Finn Rowe.

Daniela Moroz – US Sailing’s Yachtswoman of the Year

At only 21 years old, this year marks the third time that Kiter Daniela Moroz has been named US Sailing’s Rolex Yachtswoman of the Year.

“It’s such an honor to win this award for the third time,” said Moroz. “All year I was just focused on being the best sailor I could be, so this is a pleasant surprise.”

In 2021, Moroz dominated the female Formula Kite class, winning Women’s Formula Kite Worlds and the Formula Kite European Championships. She was the top female at both the San Francisco and Clearwater US Open Sailing Series.

Raised in the San Francisco Bay area, Moroz competed in her first international event at age 14, winning her first World Championship only a year later, at 15. Since then, she has won five world championships and four European championships. Moroz is currently a student at the University of Hawaii while she campaigns for the 2024 Olympic games, where the Formula Kite will make its Olympic debut.

2021 Rolex Yachtsman and Yachtswoman of the Year Awards

Established in 1961 by US Sailing and sponsored by Rolex Watch, U.S.A. since 1980, the annual presentation of US Sailing’s Rolex Yachtsman and Yachtswoman of the Year awards are considered the sport’s ultimate recognition of an individual’s outstanding on-the-water achievements for the calendar year. Winners are chosen from a pool of nominees by panels of past winners and eminent sailing journalists and dignitaries.

The partnership between Rolex and US Sailing is natural considering the Swiss watchmaker’s long-term commitment to fostering yachting excellence worldwide. Rolex is a committed partner of the most prestigious yacht clubs around the country, including the St. Francis Yacht Club. Rolex shares the highest standards of excellence and superior performance with US Sailing, acting together as joint custodians of yachting’s finest spirit. 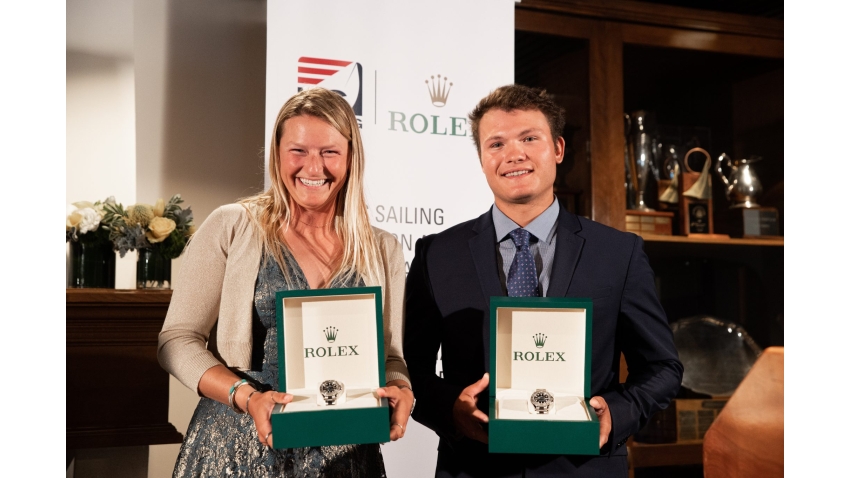