Eleven boats were on the starting line, including five Melges 24s from Austria and Germany among other sportboats like VX-One, J70, maxfun25, blu 26, ESSE 850 LE.

Five races were sailed during two racing days in perfect conditions with blue skies on Saturday and under the clouds on Sunday with winds from 5 up to 16 knots.

Michael Tarabochia's White Room GER677 with Luis Tarabochia at the helm and Marco Tarabochia with Sebastian Bühler in the crew coped fairly well on Saturday with wonderful weather, summer temperatures and five to eight knots of wind scoring 2-3-2.

Due to the Covid-19 measures only 4 persons were allowed to sail on one boat. "That was a small change, but it didn't bother us anymore," said Sebastian Bühler, tactician of White Room.

Also according to the Bavarian Corona rules, the crew was composed correctly: only two households, since the Tarabochias are one of the few three-person, family-friendly regatta crews. In the evening, however, the UYC Wolfgangsee also had to pay attention to the distance rules applicable in Austria. But the focus was clearly on regaining freedom on the water, on sailing.

And even after the weather change on Sunday, two races could still be sailed. In more constant conditions and wind with 9 to 16 knots, the White Room GER677 achieved two bullets collecting 6 points in total and won the victory Sportboot-Cup 2020 as well as in the Melges 24 classification for the Edelweißtrophy Melges 2020.

Austrian team on AUT68 with Anna Luschan at the helm and Christopher Eisl, Michael Luschan and Katharina Luschan in crew finished second in the Melges 24 ranking (3rd in overall) followed by Michael Schineis' Pure AUT716 with Jaun Wickl, Simona Höllermann and Max Stelzl in crew (4th in overall ranking).

"It was just good to be back on the boat," beamed Michael Tarabochia. "We were here not for the points and result, but to sail with friends on our beloved boat Melges 24!" 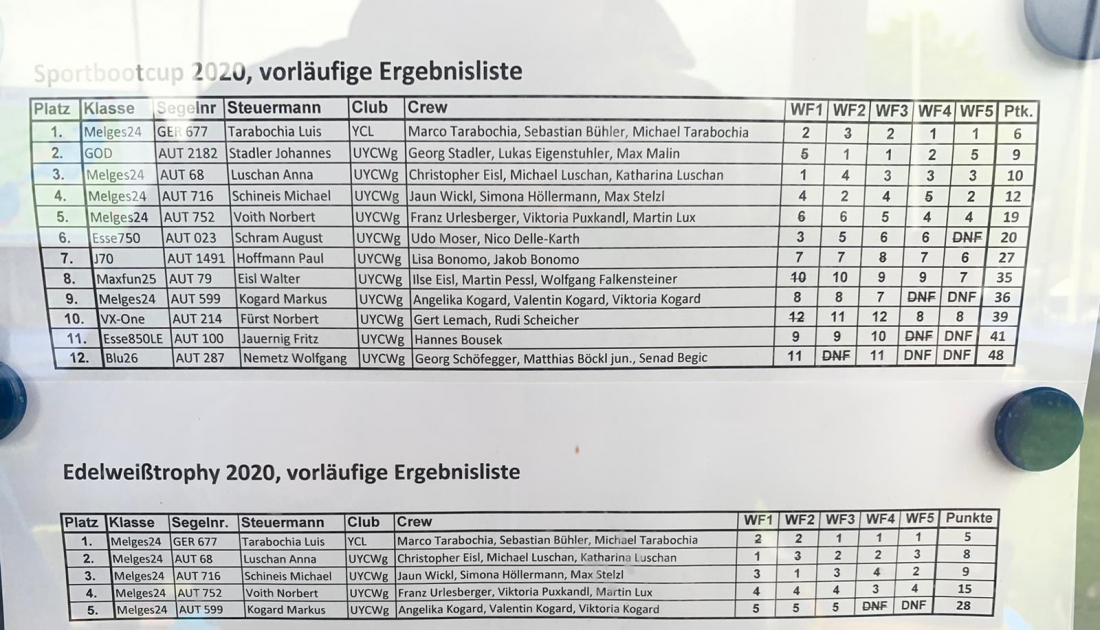