Nine Melges 24 teams were eager to race against each other and enjoy Miami conditions, however, this time Miami didn't deliver that much - one race only was the outcome of the weekend. This only race was won by Laura Grondin's team Dark Energy with her crew Scott Ewing, Taylor Canfield, Cole Brauer & Richard Peale. Second to cross the finishing line was Bora Gulari's New England Ropes with Kyle Navin, Norman Berge, Ian Liberty and Michael Menninger. Third place belongs to Steve Boho's The 300 with Catherine Boho, Ben Keller, Ted Keller and Joe Kutschenreuter.

While not a perfect day of sailing on Biscayne Bay, competitors in the Bacardi Invitational Winter Series Event One, finally spread their wings a bit this afternoon. The Race Committee was committed to waiting for breeze on the water, to avoid sailors congregating at the venue. By one o'clock, a light wind arrived from the south arrived with just enough velocity to finish one race for the J70 and Melges 24 Classes. Laura Grondin's Melges 24 team, Dark Energy, was vindicated today with a race win, after yesterday's race was abandoned while they were well in the lead. Winner of the J70 Class, Michael Illbruck, was all smiles, especially after the effort it took to get his team from Europe to Miami for the event.

It's rare that Miami has two days with so little wind, but the cool weather (by Miami standards) during the last week, lessened the temperature differential between the ocean and the bay, making it hard for a sea breeze to fill. Around one o'clock, the Melges 24 Fleet got underway, followed by the J70s. Starting was tricky for the fleets, with so little wind and strong current pushing teams back from the line. Some teams got in trouble at the windward mark as the current pushed them down into it.

As shifts were slow coming, teams that found themselves in front were those who not only started well, but those who were patient, had minimized and smooth maneuvers, and played the wind and current well downwind - no easy task for any team.

Melges 20 World Champion and new Commodore of the Yacht Club Costa Smeralda, Michael Illbruck is looking forward to bringing his team Pinta back to the next event in January. "We are very happy that Bacardi did this regatta. It was very difficult for the Race Committee, because there was a projection for good breeze yesterday, but it didn't work out. Today we did get one race in and it was really good to see that. The regatta was very difficult. It's also a lot of luck. We sailed well. We were happy with the light wind, but besides the sailing, we were just saying on the boat yesterday, without any racing, we are just happy to be here."

The well-loved post-race Bacardi cocktails and prize giving were missed by all, but teams departed once again with their contactless cocktail packages. They are looking forward to the next event in January. Similar to Event One, all those involved, including coaches and regatta support, will be required to provide negative COVID tests, within 72 hours prior to the regatta.

Day One Report - Light Wind Start to the Winter Series

After several enjoyable practices days in Miami leading up to the first event if the Bacardi Invitational Winter Series, the wind machine shut off due to storm cells around the bay. After months of little racing, the Race Committee and competitors were eager to get out on the water. To avoid competitors converging on the venue at the same time, Fleet start times were staggered, with the VX One Class slated to start at ten thirty am, the Melges 24's thirty minutes after, the largest fleet, the J70s at noon.

Looking at the dark clouds brooding over various parts of the bay seemed to be key to deciding where to head on the race course. However, many teams did not anticipate the tremendous amount of current running right to left on the course, making laylines difficult to predict.

The VX One Fleet was fortunate to complete its first race, albeit in a dying breeze. John Morreale and Jim Thompson crossed the line first, followed by Doug Clark and Sarah Wilkinson. Teams with two people versus three had an advantage in the lighter wind.

In the Melges 24 fleet, Laura Grondin sailing with Taylor Canfield, Cole Brauer, Richard Peale, and Scott Ewing started a few boats down from the Race Committee and with a great start were able dictate easily where they wanted to go on the upwind and led by a wide margin at the first mark. The fleet was tight thereafter. The dying breeze caused the fleet to spread on the second upwind and by the final downwind, most crews found their way to the leeward side. Grondin and her team, Dark Energy, extended their lead and were about 10 boats lengths ahead of Anthony Kotoun's team when the Race Committee abandoned the race due to a wind shift.

Following the abandonment, all fleets were postponed on the water. For many, waiting for wind was an opportunity to catch-up with friends for the first time due to there being no in-person Skipper's Meeting or the usual Bacardi social events. At two o'clock, the Race Committed cancelled racing for the day. Teams happily headed to shore to grab their contactless Bacardi cocktail kits and are looking forward to tomorrow's racing.

As covid-19 has made us all rethink everything we do, it has not been an easy decision to keep racing going as the safety of our sailors and event team as well as the community is our highest priority. However Bacardi together with the Organizing Committee are confident the preventative measures taken will keep everyone safe, with negative test results required from all, daily temperature checks, social distancing, mask wearing and virtual briefings. 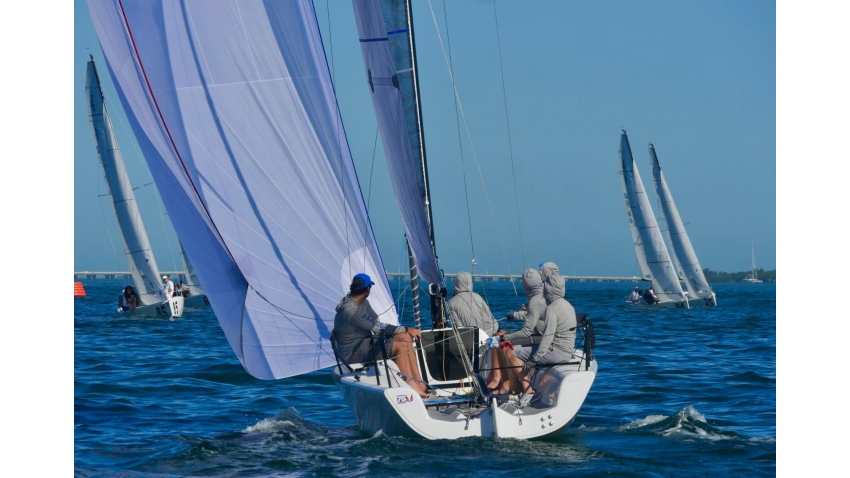 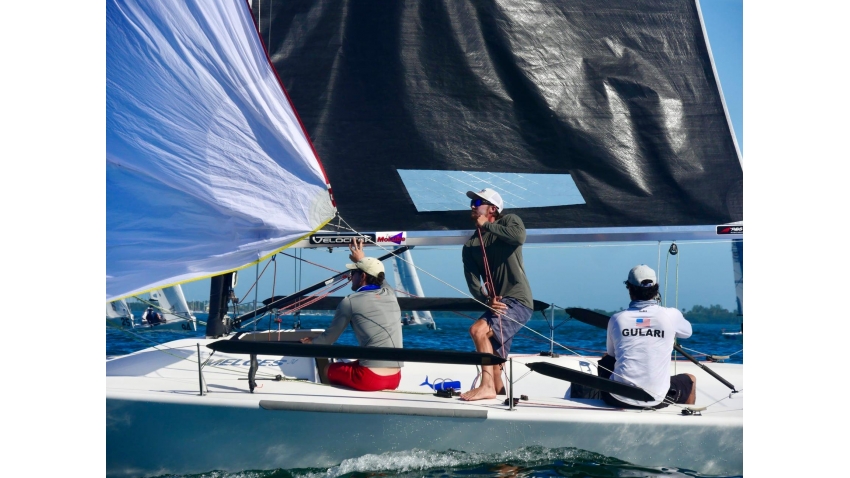 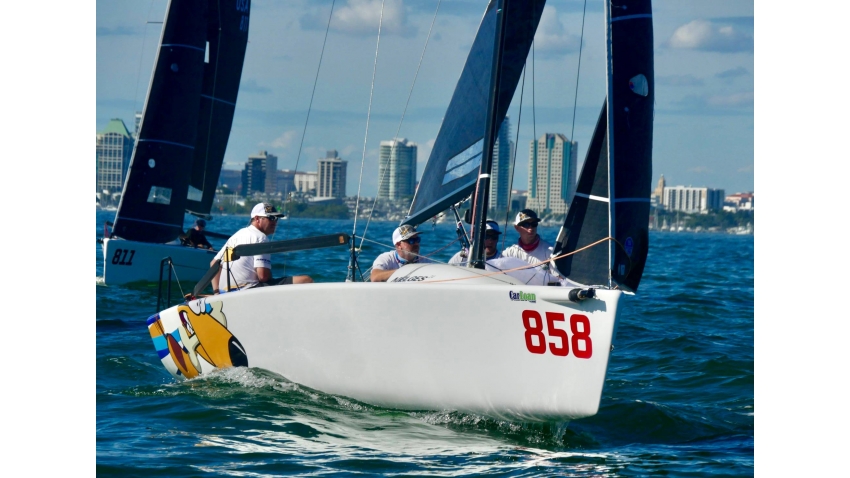