Closing in on Glory at the Bacardi Cup Invitational Regatta

March 12, 2021 - Miami, FL, USA - An easing up of the breeze at the 94th Bacardi Cup and 2021 Bacardi Invitational Regatta on Biscayne Bay, Miami, saw some changes in form in the J/70 and Melges 24 Classes with new faces coming out front.

A nail-biting three-way tiebreak sees 27 points apiece for the top three in the Melges 24, leaving everything to play for in tomorrow’s final three races.

By the time the Melges 24 got their first race of the day underway at 11.36 hours the wind was phasing up and down around 18 knots, easing as the day progressed. The first attempt to start race 4 was a general recall, with the re-start going clean.

Defending Champion Bora Gulari and his team on New England Ropes took the pin end start and nailed it through to the first mark, holding on to claim the win by a significant margin. They followed up with scores of 3,4 in the next two races, and only sit off the top three due to a DNF in race 2, after an altercation with the pin end anchor line, which will be discarded after tomorrow’s race 7 to shuffle the leader board standings.

“We had a pretty solid day today,” said Gulari. “The beginning of the day was pretty windy, nice glamour Melges 24 planning conditions, and it slowly got lowered to lazy planning conditions and an average of 12-13 knots by the end of the day. It was puffy, it was shifty, lots of clouds causing wind shifts so it was a great day of racing on the bay. It is hard to think of it, we had a challenging day yesterday. We are back in the regatta, I think we are a couple of points out, we don’t have a drop yet so are still carrying the DNF. We just got to keep charging and see what happens I guess.”

Top placed female skipper is Laura Grondin (USA) and her team on Dark Energy in 7th overall, although today they kept a lower profile in the fleet compared to their prominence of yesterday. In recent years Grondin has gathered some professionals on board to help improve team skills and for this year’s event has a super talented line-up. Commenting on the racing so far Grondin said, “This is a challenge you know, it is heavy, there is a lot of breeze out there. I am using all the strength I have to move the sail controls when I have to. But I focus on good driving, and I feel that for me this week is the key to success.” 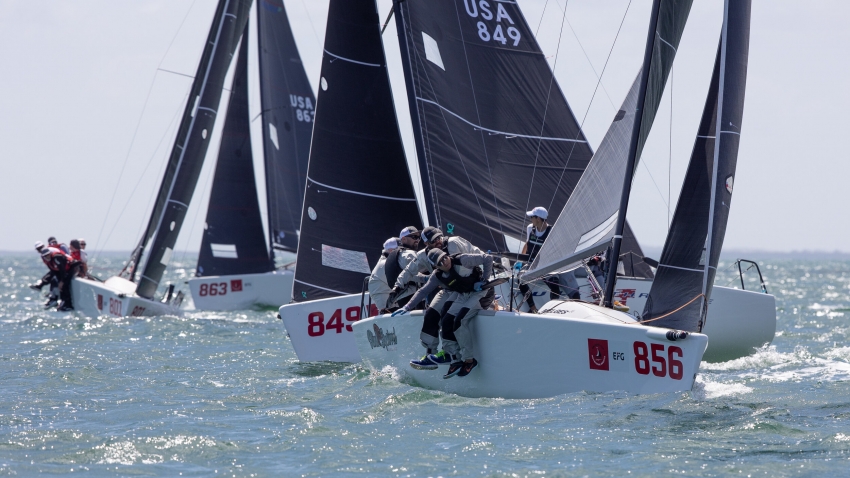