January 23, 2020 - Miami, FL, USA - Event 2 of the Bacardi Invitational Winter Series will unfold on the waters of Biscayne Bay, Miami, from 23-26 January 2020 as many of the world’s top Melges 24 resume their battle for supremacy.

In December 2019, the first of this three event series featured forty boats across the Melges 24 and J/70 fleets, spanning Brazil, Canada, Germany and the USA, with a climb to fifty-three entries for this weekend’s event and three new nations: Great Britain, Italy and Mexico.

Hosted at Biscayne Bay Yacht Club, nine windward/leeward races are scheduled for the Melges 24 who kick off their race programme on 24 January, with the J/70 fleet taking to the race track on 25 January for a six race series. The breeze set to be light and fickle on Friday, building to a different race track over the weekend with an expected 11-13 knots forecast.

A mixed weather system in December’s event 1, with big breeze followed by light airs, saw a dramatic win in the Melges 24 fleet delivered from the crew on Warcanoe skippered by Michael Goldfarb, who converted a one point deficit to the leaders in the final race to clinch victory on a tiebreak advantage. Consistency across the six races earned them an all-top 7 scorecard and they return for another slice of the action and aspirations of repeat race track glory at event 2. 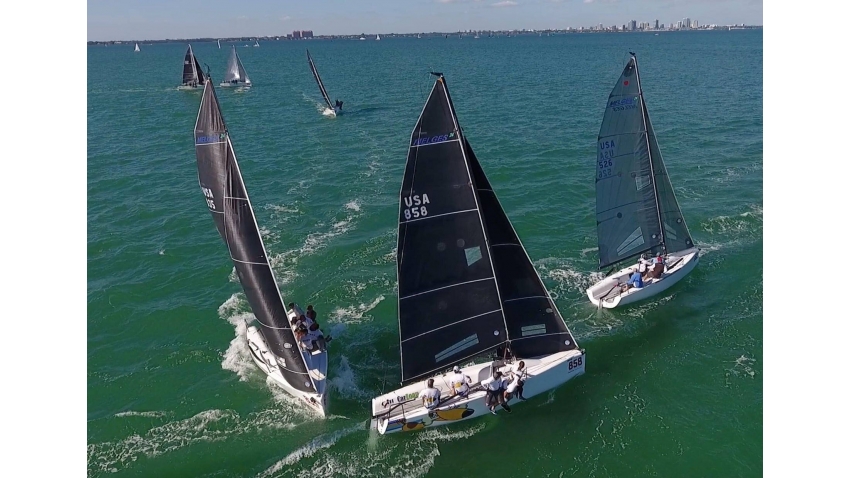 They will be part of a twenty-eight boat Melges 24 fleet who will battle it out at event 2 in what will be an interesting fleet dynamic, including the defending 2018/2019 champions and World silver medallists Bruce Ayres and his team on Monsoon with America’s Cupper Mike Buckley on board. Minimizing risk on the light wind opening day will be key, as racing is set to be more a game of mental strategy than physical, and likely to reward those with local knowledge, particularly factoring in the current.

The J/70 to overhaul this weekend is the team on Surge skippered by Ryan McKillen, who showcased their tenacity to bounce back after a mid-series shocker to claim the win in December. They are just one of twenty-five talented teams making the trip to Miami to stake out front of fleet finishes in a fight that will be finely balanced.

Supported by the legendary Bacardi Rum brand, teams will enjoy the renowned Bacardi Happy Hour cocktails as well as Sailors’ parties and memorable shore-side hospitality for a fully immersive race and post-race experience.