The Melges 24 fleet pulled out all the stops with impressive, blistering speed sprints that were so cool to watch, and those that have sailed a Melges 24 know just how much fun the downwind run can be. Turquoise waters, the winds of 15-23 knots form North and North-East and big waves made this to a perfect playground what Melges 24 teams and this boat like!

There were three teams who made it to the top of the ranking on the first day of the Worlds. Harry Melges IV and his team on Zenda Express had a great start and the first bullet of the Melges 24 Worlds 2022 went to the newest boat and one of the youngest teams in the fleet.

“It feels great!” said Harry Melges IV at the dock after the races. “We did a really great day sailing out there in Fort Lauderdale and it was just perfect,”

The boat who was electrifying the course with upwind speed in every race, was Bora Gulari’s New England Ropes, starting with fourth result and taking a clear bullet from the second race and was second in third, making it hard for the other competitors to beat his score today, but Harry Melges IV was consistent enough to score two fifth results after bullet putting his team four points out of the lead. IM24CA Chair Laura Grondin on Dark Energy, where the tactical choices are entrusted to Taylor Canfield, had a good day thus far winding out the day in third. In fourth and fifth respectively, are Bruce Ayres’ Monsoon (USA, 5-3-12) and Lucky Dog (USA, 3-8-9) of Travis Weisleder, tied on points.

Third bullet of the day went to the Corinthian team - Niccoló Bertola and his team on Taki 4 (ITA, 21-12-1). The victory tasted especially sweet since it’s Niccolo’s birthday today and Taki 4 is a Corinthian team, however three-time Corinthian World Champion (2016, 2017, 2019).

“We are very happy about the last race, of course! It was a very tough day beginning with the medium conditions and getting stronger all day long. We had a very bad start in the first race, and it was hard to get to the finish,” said Niccoló Bertola after the races. Taki 4 improved its score race-by-race and had a super start at the final race, where the wind was the strongest under the approaching clouds. Taking all marks confidently from the first position, Taki 4 finished with a solid gap ahead of New England Ropes. It’s a good mention that the coach of Taki 4 is Carlo Fracassoli, three-time Melges 24 World Champion (2012, 2017, 2019).

The racing will continue Thursday, May 12 with a first warning signal scheduled for 11 am. The warm Florida sun is scheduled to make an appearance and lighter conditions, compared to today, are forecasted.

LIVE THE REGATTA ON YOUR MOBILE downloading an App "Melges 24" in Apple Store or Google Play. 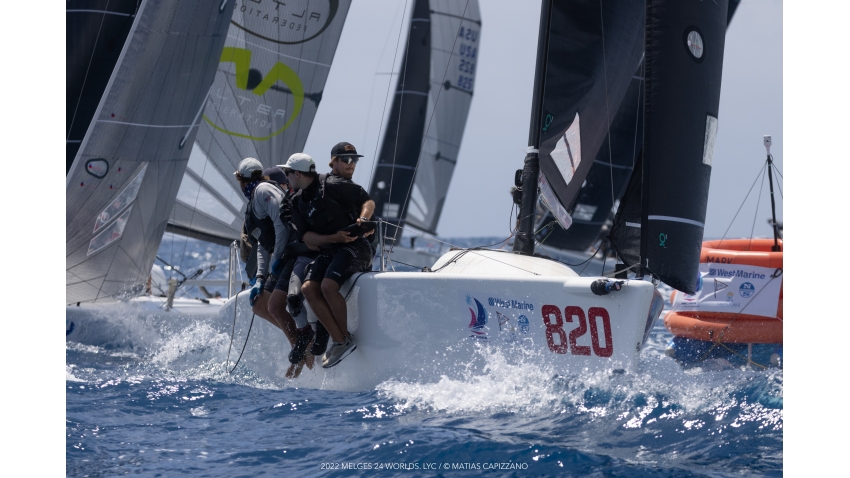 Bora Gulari on the helm of New England Ropes USA820 with Kyle Navin, Norman Berge and Ian Liberty and Michael Menninger onboard, lead after first day in Fort Lauderdale at the Melges 24 World Championship 2022 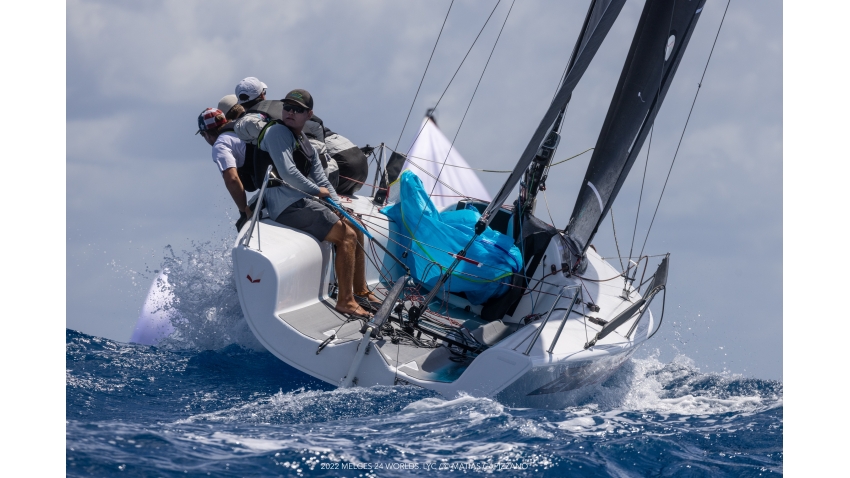 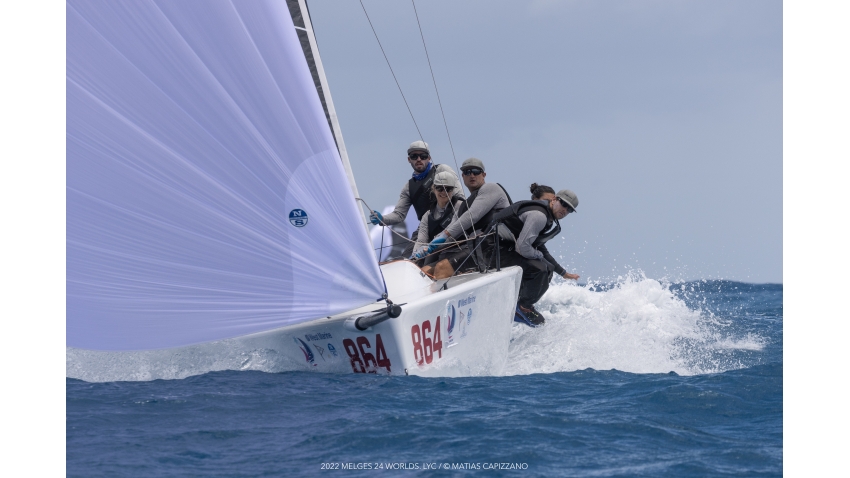 Laura Grondin on Dark Energy, where the tactical choices are entrusted to Taylor Canfield, had a good day thus far winding out the day in third after three races at the Melges 24 Worlds 2022 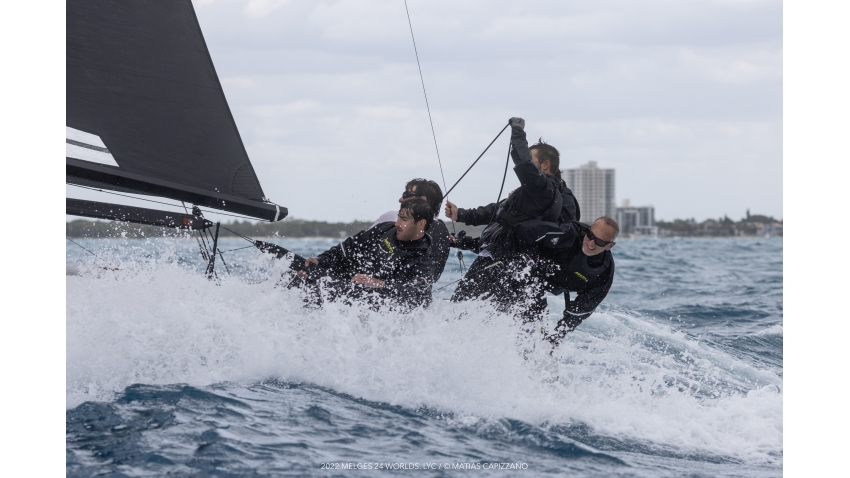 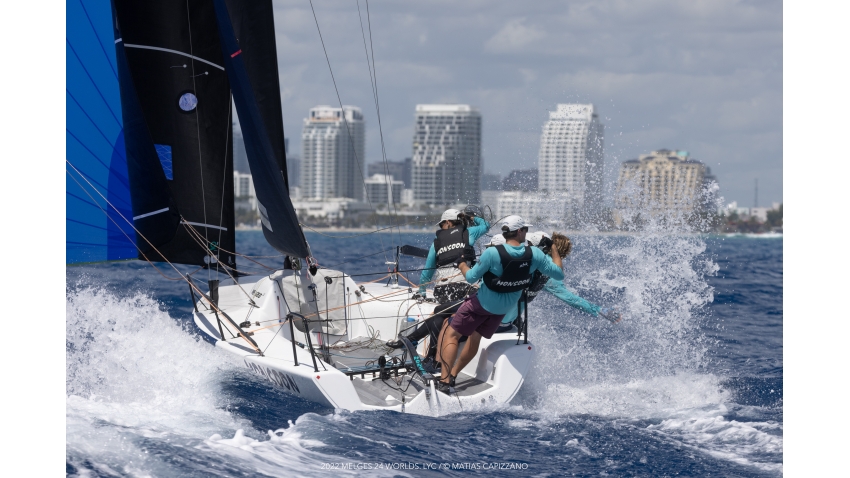 Bruce Ayres' Monsoon (USA, 5-3-12) with Jeremy Wilmot, Chelsea Simms, Ted Hackney and Tomas Dietrich is on fourth position after day one at the Melges 24 World Championship 2022 in Fort Lauderdale 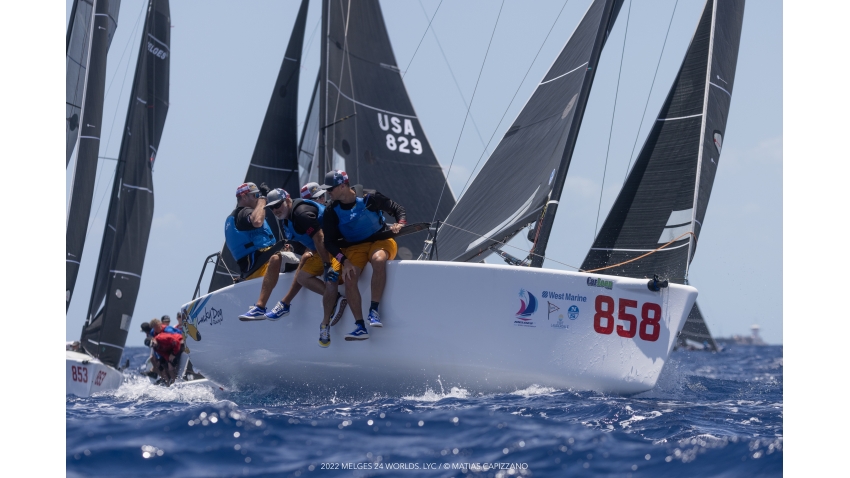 Travis Weisleder with John Bowden, Mark Mendleblatt, Hayden Goodrick on on Lucky Dog USA851 are on fifth place after three races at the Melges 24 Worlds 2022