2020 Melges 24 European Sailing Series: Lake Attersee Will Be a Challenge For the International Melges 24 Fleet

This coming weekend 28th to 30th August a group of devoted Melges 24 sailors will gather in Lake Attersee, Austria for the second event of the 2020 Melges 24 European Sailing Series and also the Melges 24 Austrian Open Championship hosted by the Segelclub Kammersee in cooperation with the Austrian and International Melges 24 Class Association (IM24CA) and Austrian Sailing Federation. This is the second time that the Melges 24 European Sailing Series will be held in Austria and the International Melges 24 Class Association is really grateful to the clubs and organizations all over the Europe willing to host the events in the series safely despite the COVID restrictions.

Miles Quinton, IM24CA Vice Chair Europe said: "On behalf of IM24CA I am delighted that the Melges 24 class is able to run the third regatta of 2020, and the second in the European Sailing Series in Attersee, Austria. It is a credit to our Melges 24 sailors that they are prepared to travel to compete in international regattas despite the uncertainties and restrictions of these times but an important step in the recovery of our sailing sport so that everyone can participate in future. We give a big Thank you! to the clubs that have confirmed or stepped forward to host and the club officers that are prepared to run these events as we could not do this without you! We are looking forward to another event that demonstrates why the Melges 24 is still the best grand prix sportsboat - fast, close racing amongst some of the best sailors in Europe."

Michael Schineis, former Vice Chair Europe of IM24CA and the Chairman of the Austrian Melges 24 Class Association is happy to express his gratitude of having the event of the series in Austria. “We have established the Melges 24 Austrian Open more than ten years ago. The fleet was growing every year, even if the year 2020 is very special and challenging for all of us. We will have up to 15 boats from four nations on the starting line. I would also like to say thank you to the Segelclub Kammersee for the flexibility and its great support to our class to postpone the event from May to August and make this event happen. All athletes are looking forward to have an exciting and fair racing in the next three days.”

The racing will start on Friday, 28th of August at midday. Melges 24 Austrian Champion and the winner of the second event of the 2020 Melges 24 European Sailing Series will be find out with eight races, discarding one worse result. Event Manager and President of the Segelclub Kammersee, Stephan Beurle: “I’m very happy to welcome Melges 24 sailors in the club and we will make our best that the sailors can have the most out of the racing and enjoy their stay off water. The club has some Covid-19 precautionary measures in force to protect the athletes. The weather report is promising challenging conditions for the weekend. We expect some rain on Saturday and Sunday and therefore a difficult wind situation could deploy over the race course.”

Among participants there are four German teams who were attending also the first event of the 2020 Melges 24 European Sailing Series in Torbole, Italy: German Melges 24 Class President Michael Tarabochia’s White Room with Luis Tarabochia at the helm, Sebastian Gastl and his team on Disco Volante, Martin Thiermann’s Ballyhoo Reloaded and Jannes Wiedemann’s Ace. German Melges 24 fleet had their Open Championship past weekend on Brombachsee with warm-up regatta on preceding weekend. Some Austrian Melges 24 teams have had a chance to race at Sportboot-Cup on Wolfgangsee in June, but due to the situation unfortunately not much travelling across the borders this season. The only team travelling to Austria from Italy is Sergio Caramel’s Arkanoe by Montura.

Results and Announcements of the Race Committee will be published on the Segelclub Kammersee website on the top of the site at the Regatta – Ticker: www.sck.at

Results, photos and news will be linked to the IM24CA website. 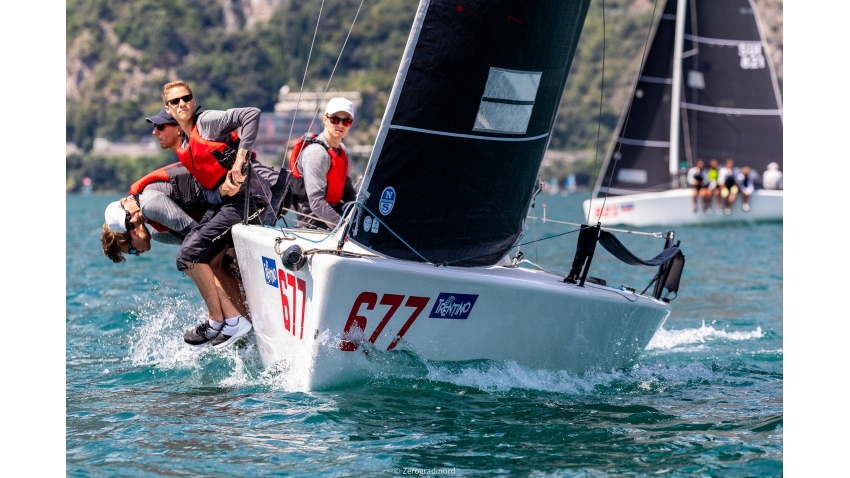 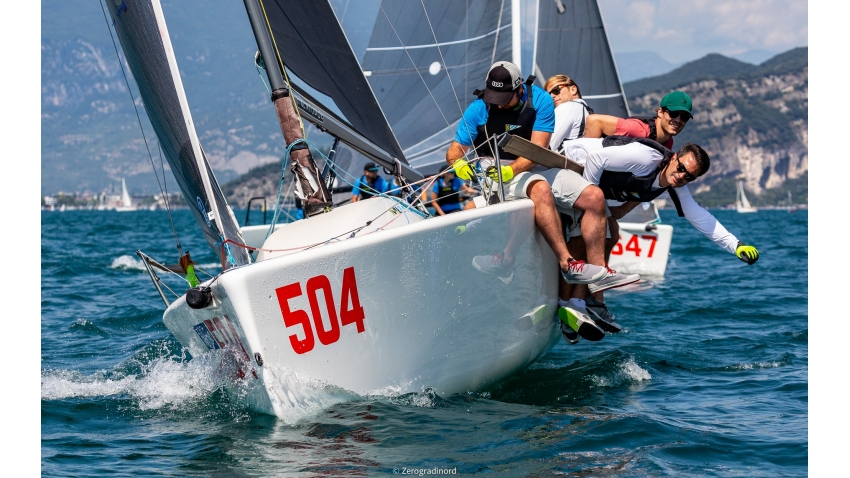 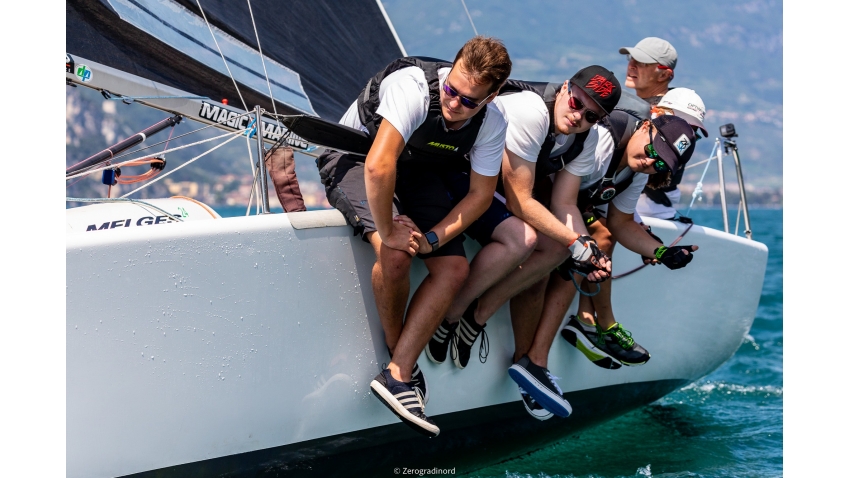 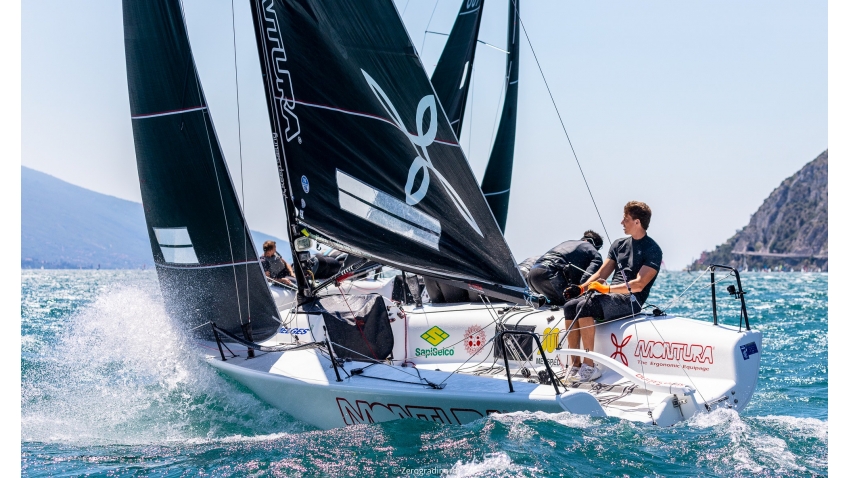 Arkanoe by Montura ITA809 of Sergio Caramel - ACT 1 of the Italian Melges 24 Tour 2020 in Torbole, Italy 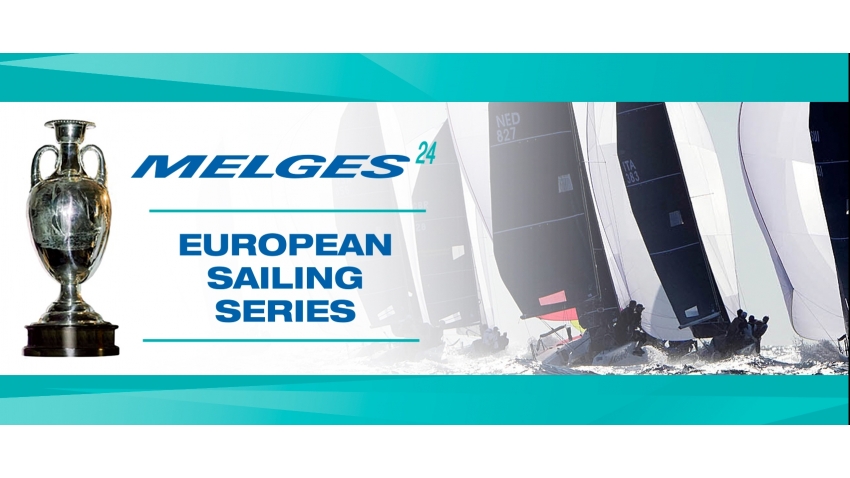