August 17, 2019 - Traverse City, Michigan, USA - Day Two at the 2019 Melges 24 North American Championship (NAC) got off to a slightly slower start. An initial general recall on the first attempt to start Race Four resulted in a two hour, on-the-water postponement. During that time, PRO Jeff Maier and his dedicated GTYC Race Committee picked up shop and moved further south. Teams waited for the breeze to build.
Going into Day Two, Richard Reid on Zingara had a substantial lead over Mike 'Flow Master' Dow on Flying Toaster in second place, and Jack Jennings' Pied Piper in third. Dow also dominated in the Corinthian category, followed by Fraser McMillan's Sunnyvale and Scot Zimmerman's Bad Idea. With much of the same conditions forecasted for the second day of competition, it was critical to do well and stay consistent in the scoring. 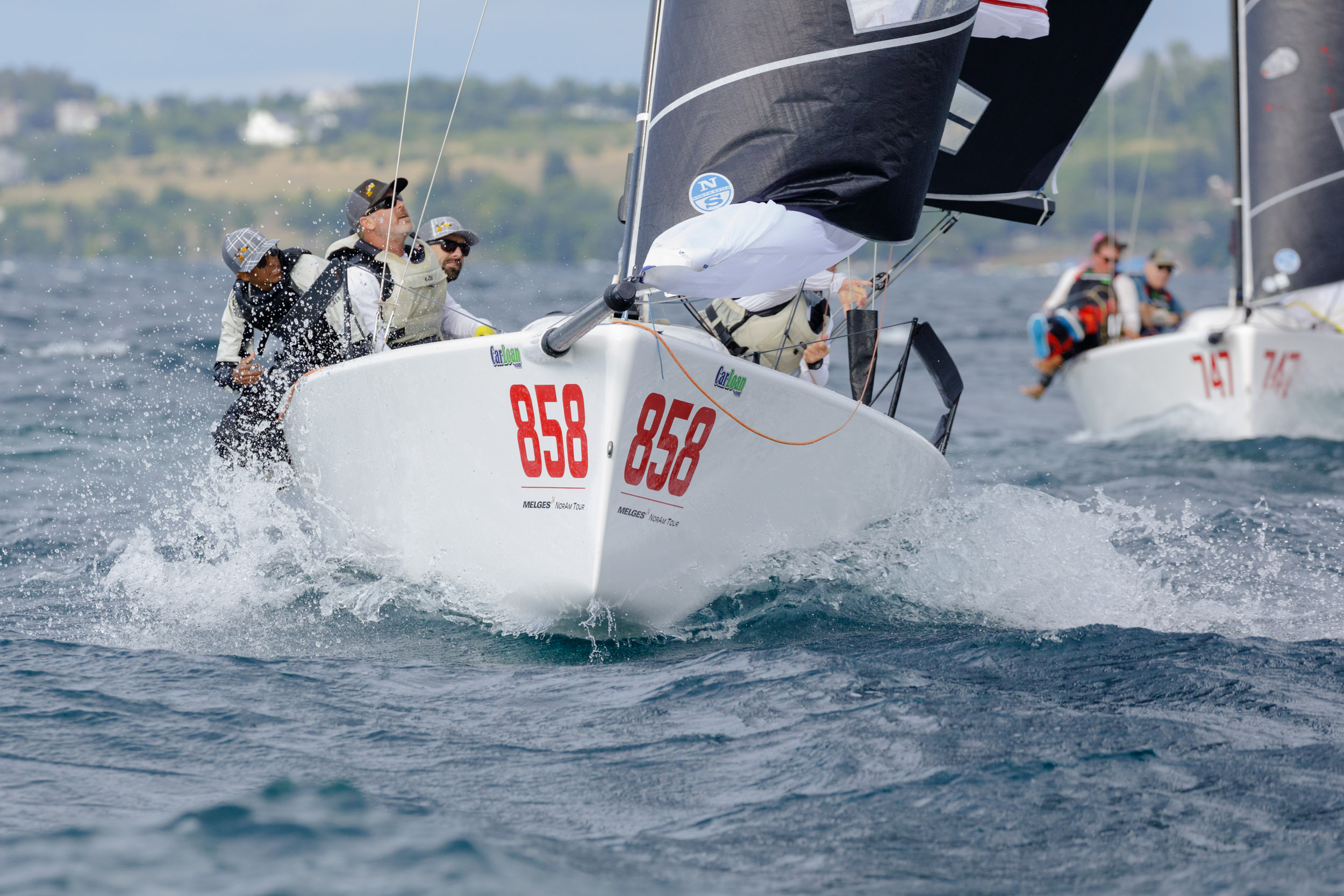 Travis Weisleder's Lucky Dog/Gill Race Team got serious on Day Two winning both races and moving up the leaderboard to second place overall. - © Bill Crawford - Harbor Pictures Company
Racing got underway around 1 o'clock and it didn't take long for Travis Weisleder and his Lucky Dog/Gill Race Team to show they were determined to win. He raced Kevin Welch's MiKEY with Jeff Madrigali at the helm through the first mark and lead the entire race around the buoys. Weisleder extended at every turn and won the race with a huge lead. Welch/Madrigali placed second. It was a photo finish for third and fourth, as McMillan got across the line just ahead of Reid. Jennings was fifth. 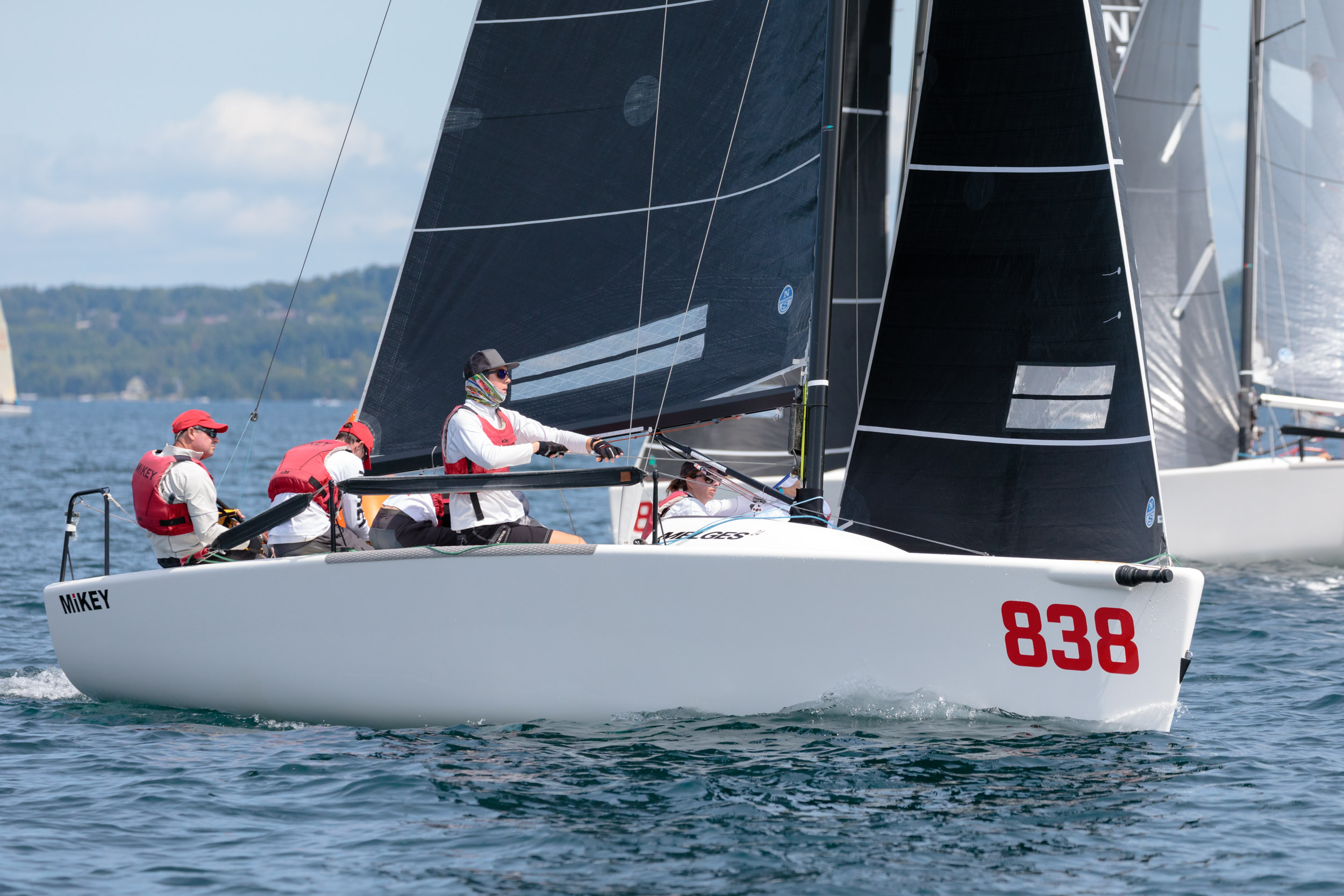 Jeff Madrigali at the helm of Kevin Welch's MiKEY stayed the course to move up from seventh, to third. - ©Bill Crawford - Harbor Pictures Company 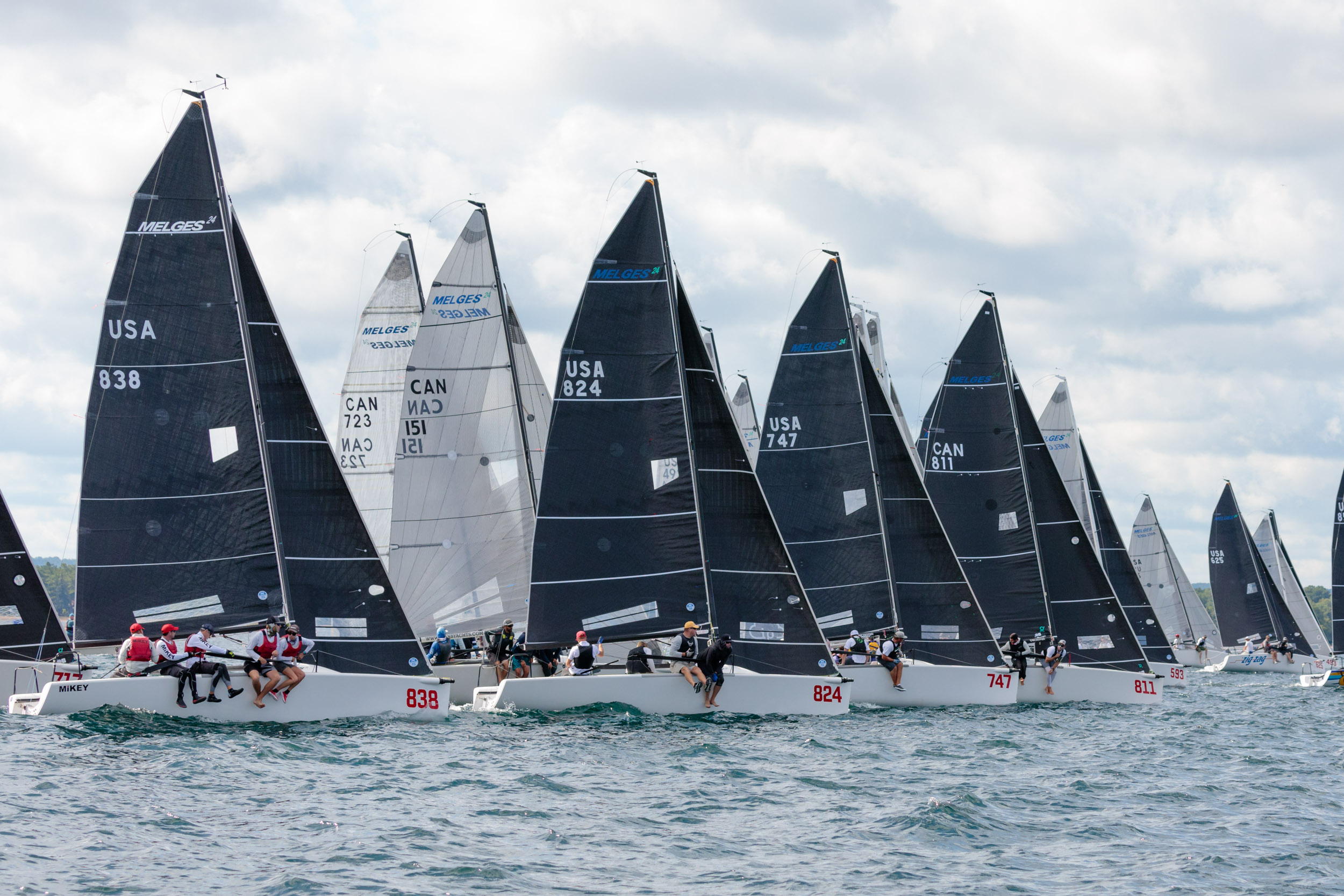 Richard Reid' s Zingara (CAN811) had great starts and solid racing to maintain the overnight lead once again at the 2019 Melges 24 North American Championship.- ©Bill Crawford - Harbor Pictures Company
With a nice breeze in place, the Race Committee fired off Race Five, the final race of the day in carbon copy conditions. Despite an early, strong lead by Corinthian McMillan, Wes Whitmyer's Slingshot, John Shockey's Wombmates Racing, Reid, Weisleder, Welch/Madigali and Jennings wasted no time in challenging for the lead. They fiercely set the spinnakers at the offset, settling in and turning on the boat speed. Weisleder and Welch/Madrigali eventually took control as McMillian slid back to third. Weisleder successfully got the win, with Welch/Madrigali settling for second.
"Today was very difficult, but our tactician Mike Buckley is always attacking the shifts," said Weisleder. "That was key. We stayed in the middle and we were fast. Mike keeps us in line. It's a simple formula - either we want to get serious and win, or we don't. We've got a great crew. John Bowden and George Peet are awesome to have on the boat, and our secret weapon is Chewy Sanchez. That guy hikes harder than anyone I know." 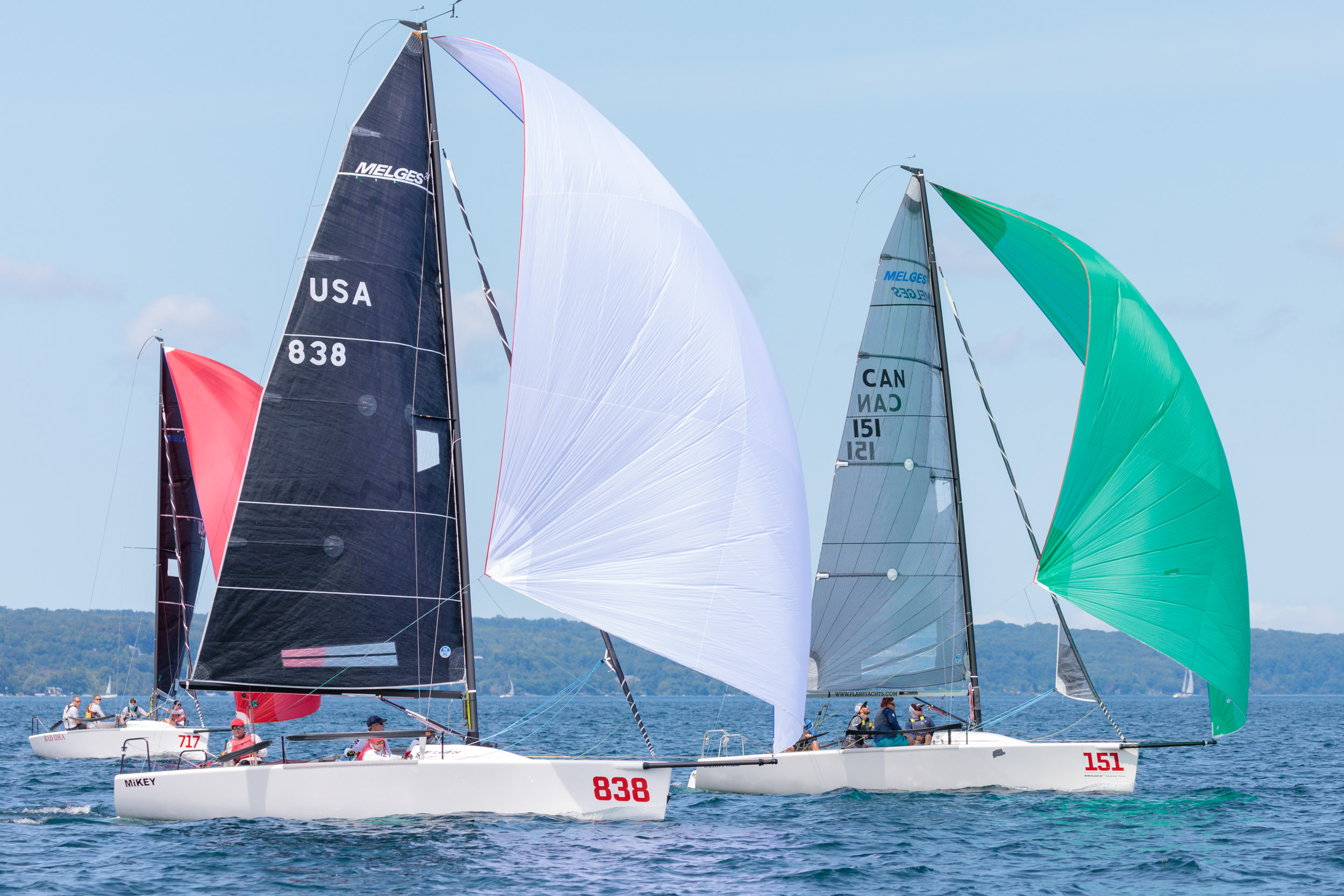 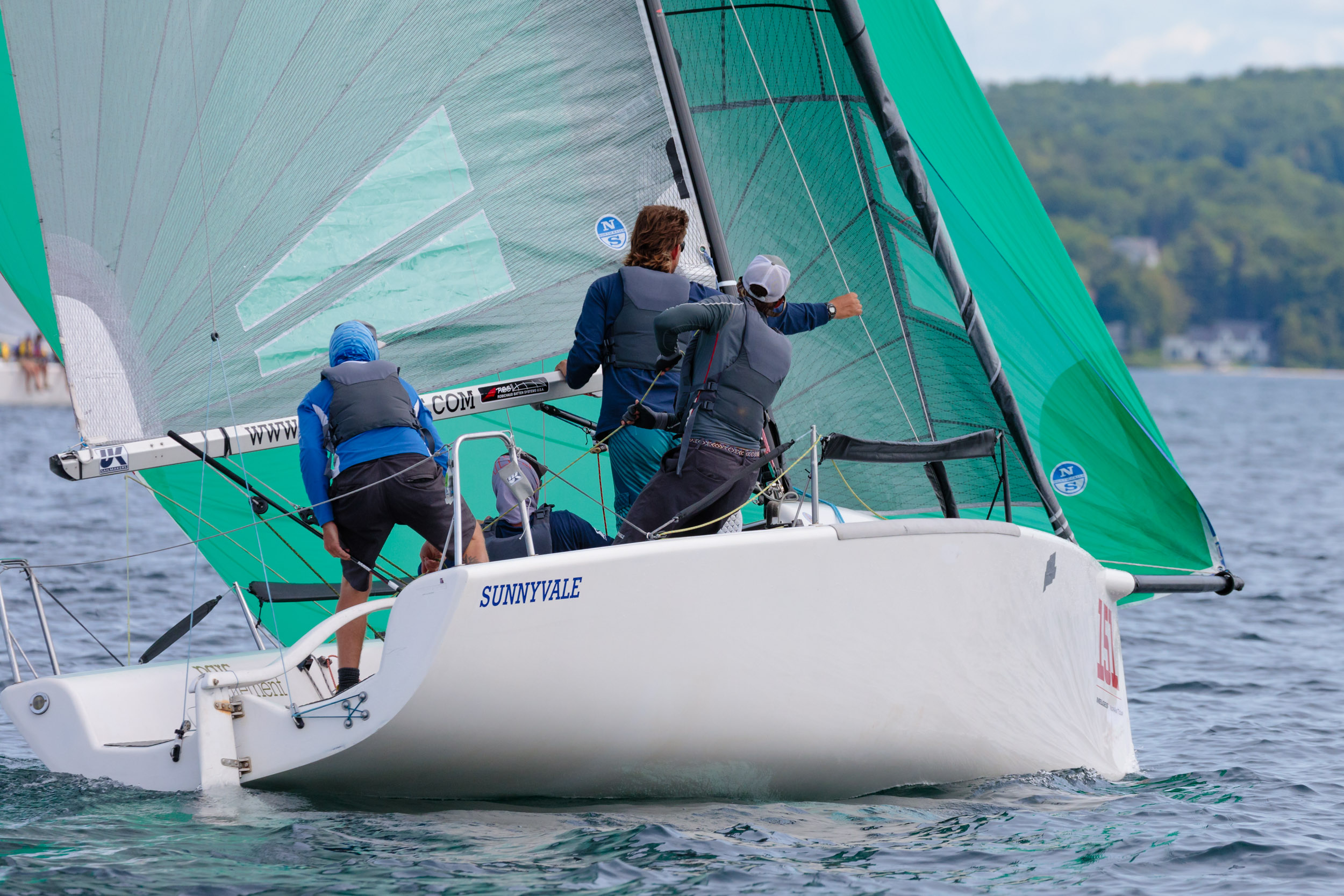 Fraser McMillan's Sunnyvale leads the Corinthian Division after two days of racing. - © Bill Crawford - Harbor Pictures Company
"We did not have such a good start on the first race today, so we had to fight hard for that third place finish," said McMillan. "We had a great start in the second race and lead for the majority of the time. Today was light, but we prefer a little bit more breeze. We just came from the Gorge last week, so we are a little spoiled. We're happy that we came out, it's such a beautiful town."
The set-up for Sunday is this - down to the wire racing for the top seeds and the forecast is calling for more breeze. With the completion of a sixth race, each team will throw out her worst score. This puts Reid and Weisleder in a head-to-head competition that will be very intense, and positions can change rapidly for the Corinthians. 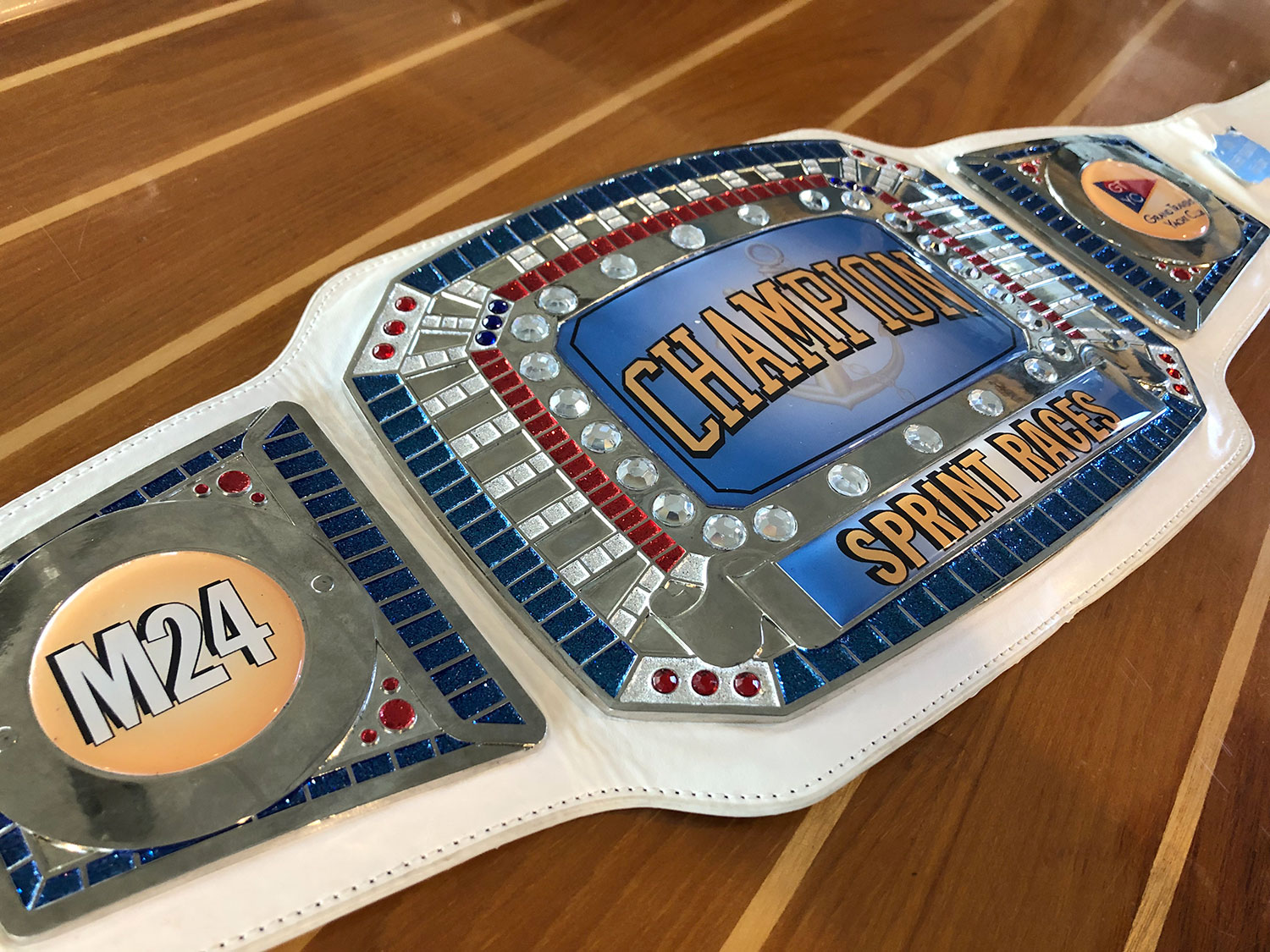 The Melges 24 Sprint Series Championship that lives in the Melges 24 corner of the Grand Traverse Yacht Club in Traverse City, Michigan. © Bill Crawford - Harbor Pictures Company
IT'S ALL ABOUT THE BELT
The Melges 24 fleet is deeply rooted within the Grand Traverse Yacht Club far more than one can imagine. It is what made it so appropriate that it host the North American Championship. It goes far beyond a group of boat owners that are crazy passionate about their Melges 24s, but they love the sport and their sailing family.
The fleet wanted to add a new spin on their Wednesday night club races, so the local fleet implemented the Melges 24 Sprint Race Series, that follows a 'short track' racing approach. The point of the whole thing is that this fleet loves to give things to each other, and that is exactly what the Sprint Races do. It gives each owner a chance to wear a custom Wrestle-Mania style belt (courtesy of Tom 'Cash Money' Roop), encrusted with all the proper pageantry and pomp demanded of a Melges 24 Sprint Race Champion. Adding extra fun to the mix, as the participants are scored, they are given a 'name', by which some have become GTYC celebrities in their own right. 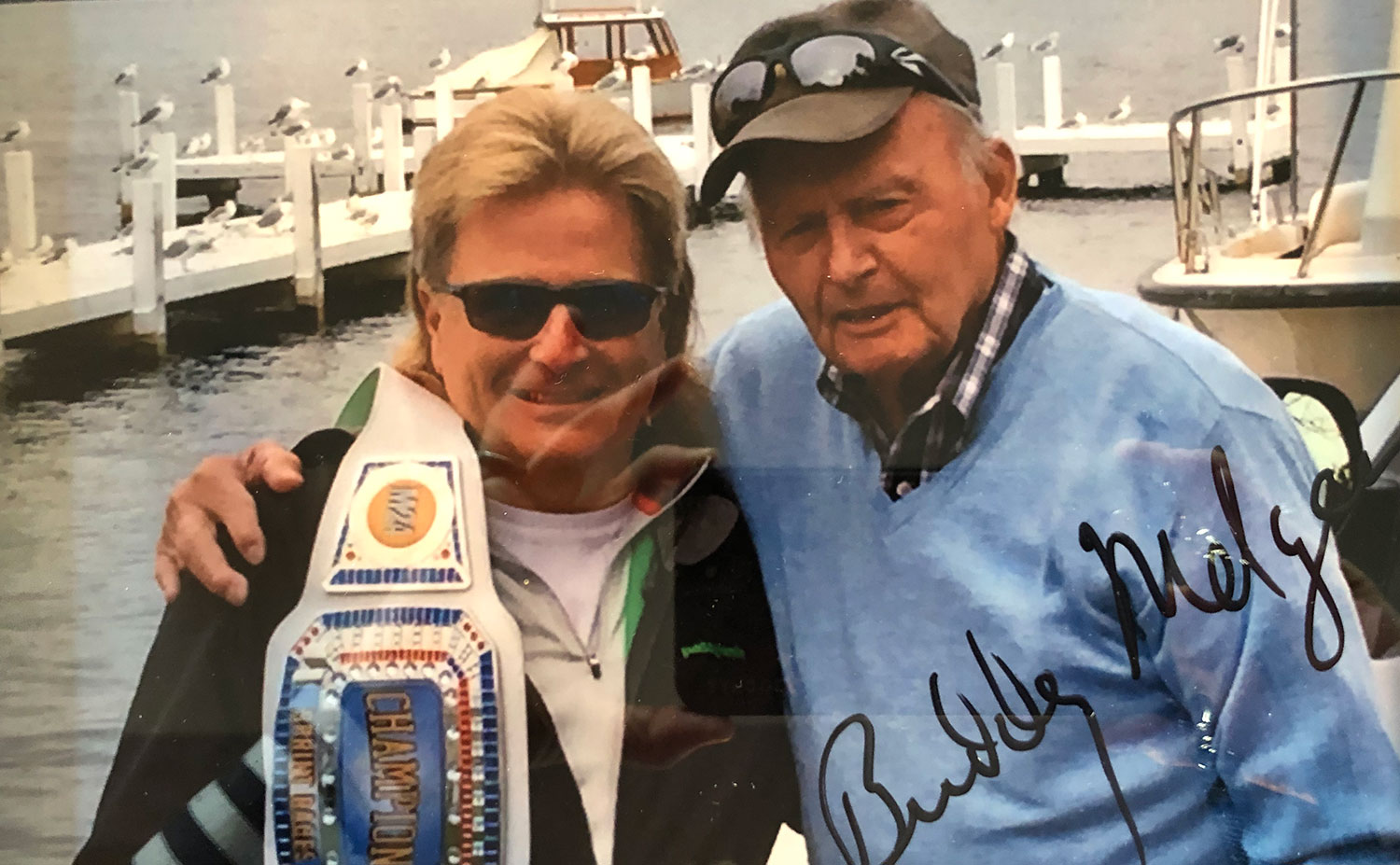 The Melges 24 is best known for its competitive disp 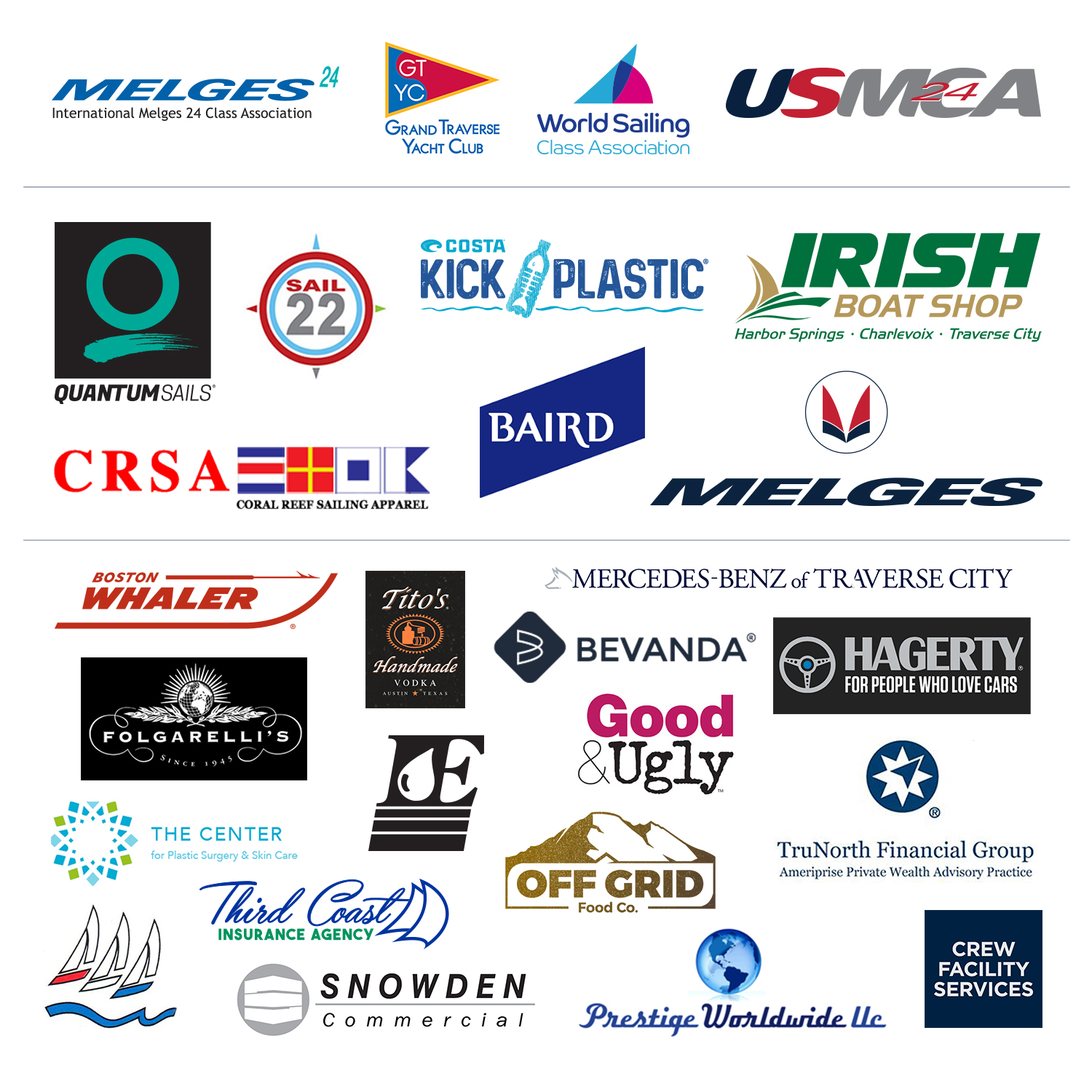