2019 Melges 24 European Sailing Series - No Races in Malcesine in the Last Day: Second Event Is for Maidollis

May 5, 2019 - Malcesine, Italy- The second event of the 2019 Melges 24 European Sailing Series comes to an end with a no race day in Malcesine: the stormy weather of Garda Lake on this first Sunday of May didn't allow the Race Committee, presided by Ettore Oradini, to safely set up the race course and add more races to the series of four completed so far.
See the full press release here
Gusts up to forty knots, choppy waters and heavy rains marked the end of this event, leaving the ranking totally unchanged after the three races completed yesterday and the only race of Friday.
The victory goes to Gian Luca Perego's Maidollis ITA854 (8 points), that less than one year ago, on the waters of the neighboring Riva del Garda, put the seal on the Melges 24 European Championship with Carlo Fracassoli at helm and Enrico Fonda calling tactics.
Enrico Fonda, tactician of Maidollis, commented: "A great beginning for us here in Malcesine, where we have completed the first regattas of our season. In the first day we had to refine some tunings after a long winter break, but since yesterday everything on board worked smoothly and, at the end of a great and tough duel with Altea, we conquered this first victory. The rest of the season will be a work in progress, a big training session towards the Worlds". 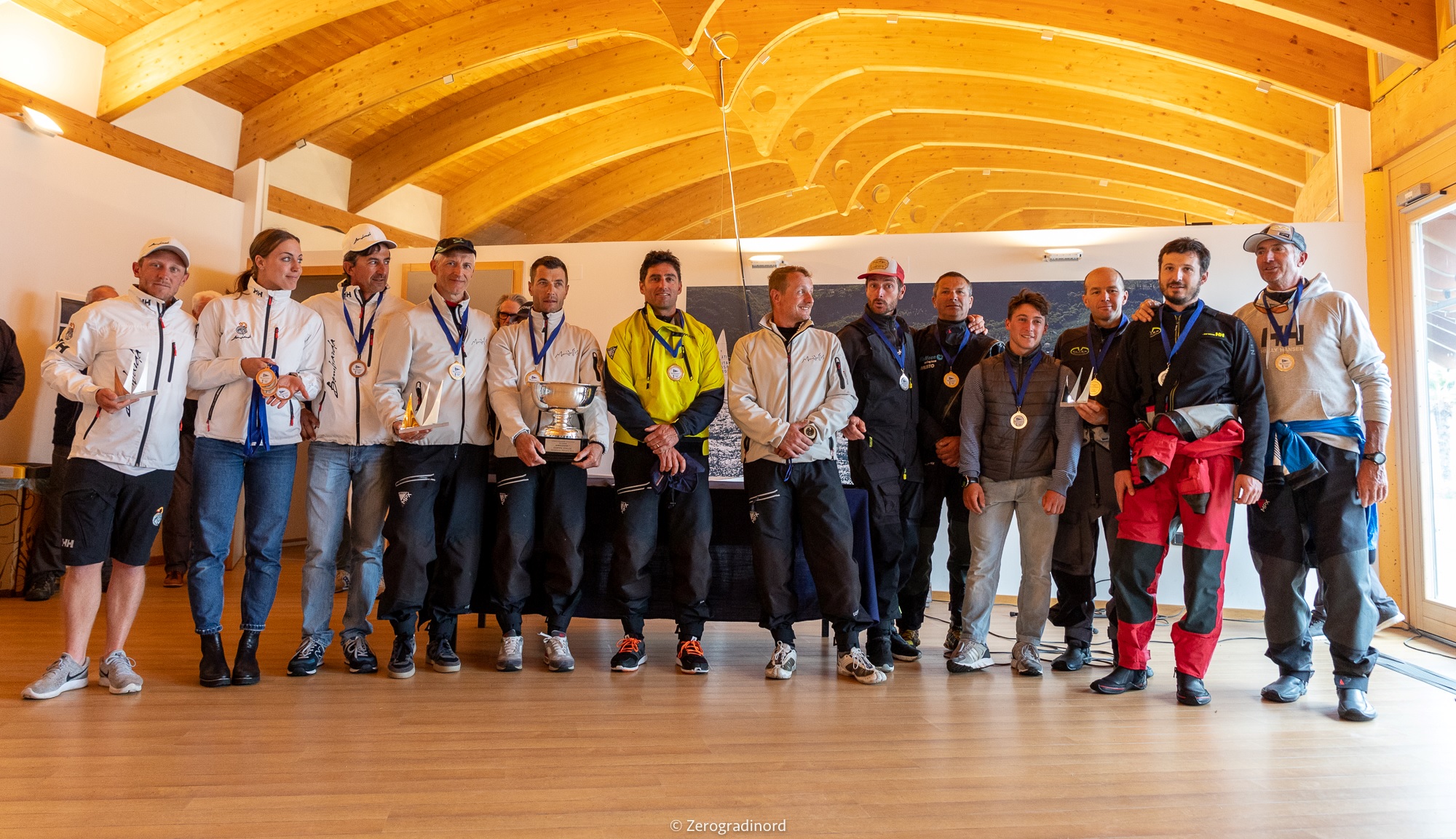 The podium of the event of Malcesine is completed by Altea ITA722 by Andrea Racchelli (13 points) and by Bombarda ITA860 of owner and helmsman Andrea Pozzi (18 points), who had a stunning return in the Melges 24 Class, with a result that, as Pozzi himself declared, "went far beyond my own expectations".
In the Corinthian division, the gold medal is for Miles Quinton's Gill Race Team GBR694 with Geoff Carveth at the helm (35 points, 5th in the overall ranking), followed by Marco Zammarchi's Taki 4 ITA778 with Niccolo Bertola helming (45 points, 7th overall) and Lenny EST790 by Tonu Toniste (49 points, 8th overall), who was also the winner of the first event of the 2019 European Sailing Series in Portoroz (Slovenia). 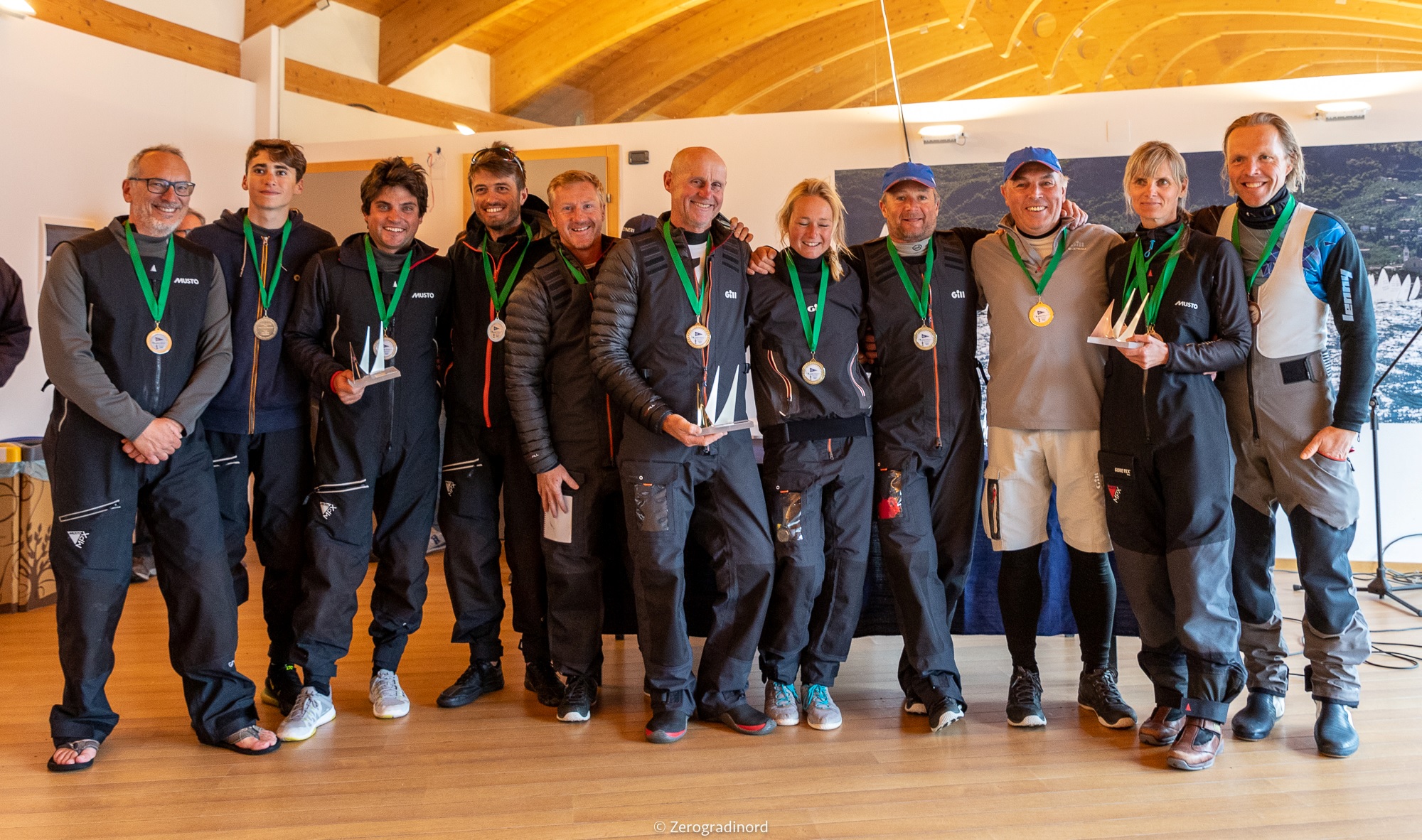 The podium of the Corinthian division - Miles Quinton's Gill Race Team GBR694 with Geoff Carveth at the helm, Marco Zammarchi's Taki 4 ITA778 with Niccolo Bertola helming and Lenny EST790 by Tõnu Tõniste. - Photo (c) IM24CA/Zerogradinord
Miles Quinton, Melges 24 International Class Association's Vice Chairman: "Forty boats on the water for the first event in Italy, what a stunning result! This beautiful season is going to lead us to Riva del Garda, Scarlino and then to the awesome location of Villasimius for the pre-Worlds and Worlds events. I wish more and more crews will join us during the year".
The Melges 24 fleet now remains on the Garda Lake, where from June 7th to 9th will compete in the third act of the Melges 24 European Sailing Series in Riva del Garda.
See the results
Photos by Zerogradinord
Videos of the European Sailing Series
The regatta was hosted by the Fraglia Vela Malcesine and Italian Melges 24 Class Association, in the cooperation of the International Melges 24 Class Association.
Media:
The best images, videos and news werebe brought to you by Zerogradinord.
Event Press Officers - Mauro Melandri and Silvia Gallegati
Event website | Event in Facebook
IM24CA - Facebook | Flickr | Twitter | Instagram | YouTube |  Website
More information about the event and series available at melges24.com/europeansailingseries