June 4, 2018 - Victoria, BC, Canada - A second day of racing yielded three more races in light and tricky conditions to conclude the 5-race series at the Melges 24 Canadian Championship 2018, organized by the Royal Victoria Yacht Club in cooperation with the Canadian Melges 24 Class Association (CM24CA), and the Canadian Forces Sailing Association, Esquimalt Squadron (CFSA).
Bruce Ayres' Monsoon from Newport Harbor Yacht Club, US has won the 42-boat fleet, winning in Corinthian Division was Robert Britten's Full Circle from Victoria, Canada, and the best Canadian team was Richard Reid's Zingara from Toronto.
Melges 24 Canadians to conclude
The weather was a bit of a change from the blue skies of Saturday. Racers were excited as the forecast was for pressure in the 10-15+ knot range, and it was already blowing over 25 just a few miles southwest of the course at Race Rocks.  You could sense that the enthusiasm was up on the dock. As soon as code flag D was hoisted at 9am for the harbour start, boats were off the dock without delay.  The Race Committee set up in racing area A, off Esquimalt.
At the 11am scheduled start time, the RC hoisted AP and squared the course up to the shifting wind that was progressively veering westward. The wind was then back up to 12 knots and stabilized to WSW.  Race Committee initiated the sequence and it was a general recall.  The next start RC went to a black flag and the race was successfully started with a few boats OCS.
Sunday's race course presented a lot of factors to weigh, particularly for this first race. The wind strength varied across the course, coupled with both shifts and puffs. The current is always a factor in Victoria and it would be changing from an ebb to a flood in the middle of the racing time.  Off the start the fleet split with some boats looking for positive current in the ebb on the left and boats on the right looking for pressure and a port tack header to tack and lift off to the weather mark as happened on the first day. The right side seemed to pay off as boats came back together at the weather mark. The wind was a bit stronger at the weather mark and it made for an busy mark rounding, with boats closer together than on Day 1.
John Brown's Blind Squirrel (USA856), the newest hull in this fleet and runner-up of the 2017 Melges 24 US Nationals, was the first boat around the weather mark with the rest of the fleet hot on their heels. By the second leg the wind had moderated to 6 knots and shifted slightly.  The Race Committee responded promptly by dropping a change mark. 2013 World Champion and the winner of 2018 Sperry Charleston Race Week, Brian Porter's Full Throttle (USA849) did a great job working their way up and finished the race in the lead, but was OCS under the black flag, so the win went to Richard Reid's Zingara (CAN853) from National Yacht Club in Toronto, who has been on the leaderboard at several recent events in North America.
The second race was sailed in slightly lighter conditions while everyone attempted to ignore the bit of rain.  Things started changing in this race as boats split left and right.  A pack including race winner Zingara took the committee end and headed right again, looking good initially with pressure, and the boats punching out left looking sad any time they flopped onto starboard to go out.  But as the left boats got further out they got into some nice pressure and positive current and came out ahead with Richard Clarke's MiKEY (USA838) taking the race.
The third race took one general recall to get going but Race Committee elected not to fly the black flag as the wind had shifted in the start.  Good puffs were coming down the course and several positions changed by boats that made the most of them.  This race decided the event with 2017 Worlds runner-up, Bruce Ayres'Monsoon (USA851) getting two points on Alan Field's WTF (USA829) to take the lead, and Zingara winning the race to move up to third overall for the regatta and top Canadian.  Richard Clarke's MiKEY (USA838) took second, moving them well up the leaderboard into the top 10.
The battle for the title of the Melges 24 Canadian Championship ended up with five races sailed throwing out the worse result from the total score. Discarding the 13th result of the first race of the event, Bruce Ayres' Monsoon from Newport Harbor Yacht Club was the most consistent with the series of 1-6-5-3 and a total score of 15 pts. Only one point behind the second was Alan Field's WTF ((23)-6-3-2-5) from California Yacht Club while Richard Reid's Zingara collected 22 pts in total (11-9-1-(14)-1) being the best Canadian team and the only one to score two bullets from the event. 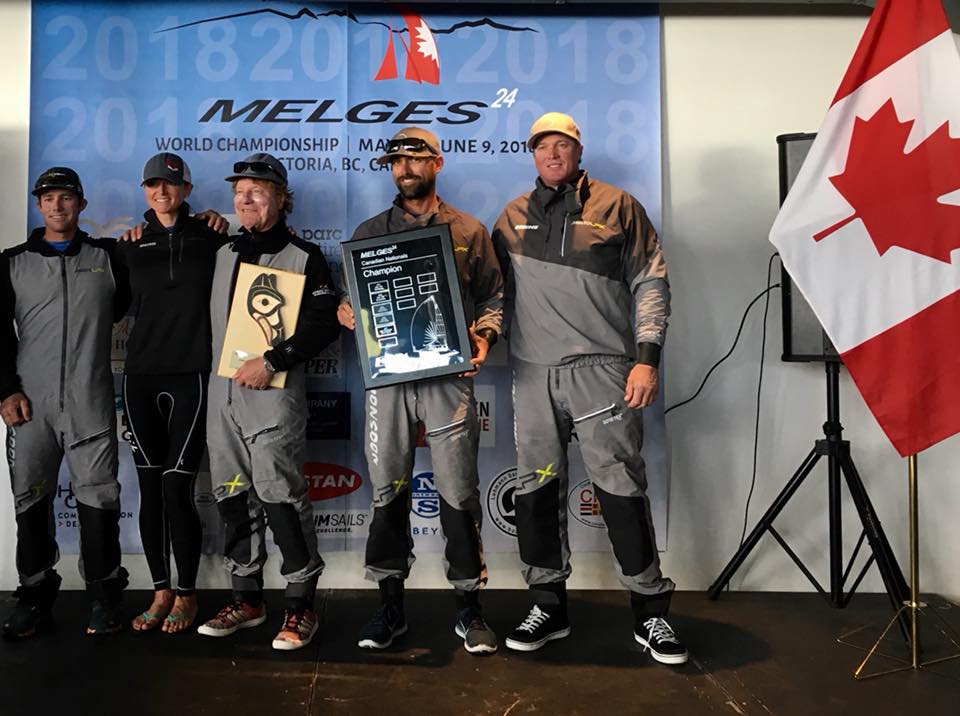 Bruce Ayres' Monsoon USA851 with Mike Buckley, Jeff Reynolds, George Peet, Chelsea Simms in crew - 2018 Melges 24 Canadian Champions - photo IM24CA
Bruce Ayres on Monsoon, runner-up of the 2017 Melges 24 Worlds in Helsinki Finland has been dominating in the Melges 24 events in North America this year. Winning Helly Hansen NOOD Regatta (being also the overall winner of the regatta), notching up another win at the Miami Sailing Week and being second at the Sperry Charleston Race Week this year, he is also Melges 24 Corinthian World Champion 2009. In the team of Monsoon besides helmsman Ayres Mike Buckley is calling the tactics having Jeff Reynolds, George Peet and Chelsea Simms in crew.
In the after event interview Monsoon' tactician Mike Buckley said that it's been light and tricky during these last two days and it's been different from the strong conditions what they have had while training here prior the Canadians. "The conditions have been tricky and shifty including strong current and besides it is cold here - hard both for the competitors and Race Committee. We managed to be consistent after the first race, when we did not start very well, but we have been trying to do better each day. It's been a good practice though for the Worlds next week and this is what for all teams came here. We were winning the Pre-Worlds last year and ended up to be second at the Worlds - let's see what this year will bring," Mike said. Talking about the competitors he said it's been too shifty to sail against the competitors out there and you are sailing just your own race. "There are plenty of great sailors and probably about ten teams to win the Worlds' title and we are going to see who is getting this chance on Saturday!" 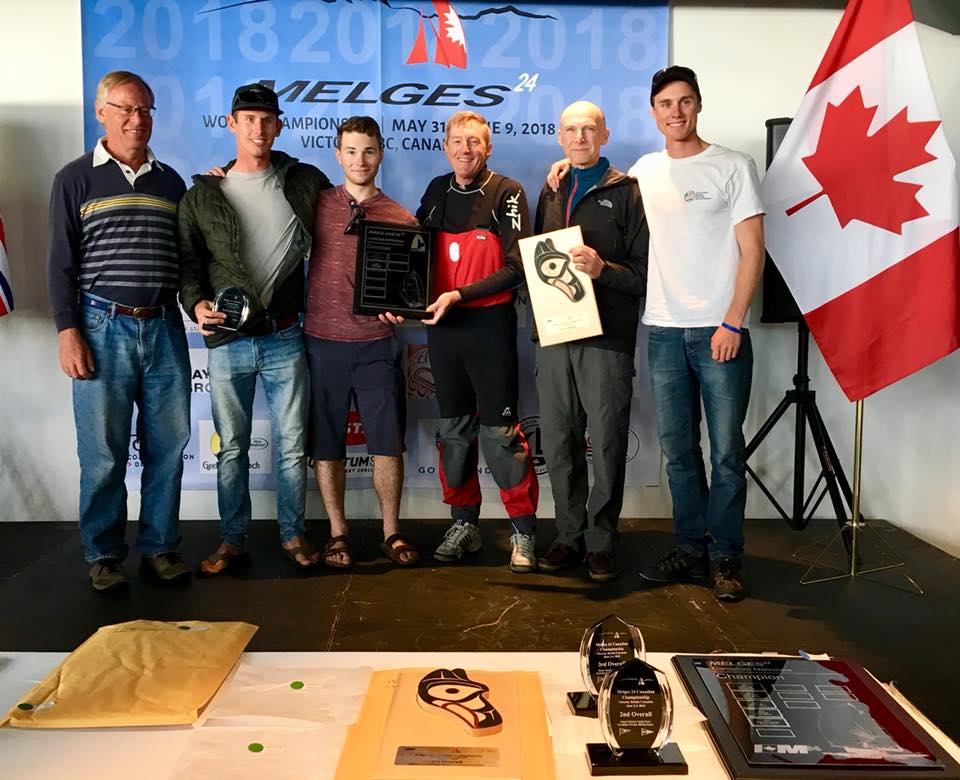 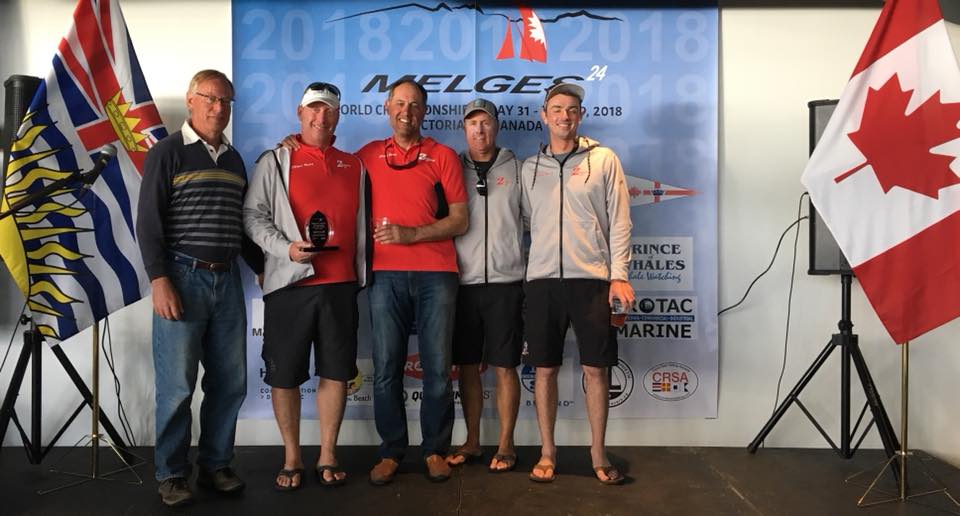 Richard Reid's Zingara CAN853 with Scott Nixon, Mike Wolfs and Billy Gooderham - the best Canadian team 2018 - photo IM24CA
Full results of the Melges 24 Canadian Championship 2018
Photos of the event - Copyright © Thomas Hawker
Lay-day before the thrill begins
Today it's a lay-day in Victoria giving to the teams a chance to explore this beautiful city and to have the final preparations for the 2018 Melges 24 World Championship. Tonight the 41 teams from five nations - Australia, Canada, Italy, Great Britain and United States are welcome in the Victoria International Marina for the Competitor's Meeting and the Opening Ceremony of the World Championship to be greeted by Commodore of the Royal Victoria Yacht Club, Randy Diamond. The battle for the Worlds' title will start on Tuesday with a first warning signal scheduled at 11am. The Harbour Start will be at 9am and the racing can be followed live via TracTrac website.
Full entry list
Find out more about the teams competing at the Melges 24 Worlds
Good luck and fair winds from the International Melges 24 Class
On behalf of the International Melges 24 Class Association, Chairman Jens Wathne welcomes all teams who made their efforts to come to the first ever held Melges 24 title event in Canada:
"With the upcoming 2018 World Championship in Victoria Canada, our goal is to make high performance sailing more popular in North-America. The organizing committee has worked hard to put on the best possible event. The sailors, local organizing staff and the International Class Association is looking forward to this.
After parting with the US National Class and forming a class of its own, this will represent another step in the right direction for this NCA. The association has worked tirelessly to host the race for the most important title of the Class.
The conditions of the race course look amazing and the videos from practice races should excite the competitors. If you have entered the competition for the title of the next World Champion or you are competing in your first major championship - best of luck to you all! I am sure that you will be taken good care of in Victoria.
Good luck, fair sailing and enjoy!"
Event's media:
FB/Instagram Melges 24 World Championship 2018
Twitter @m24worlds2018  #melges24worlds2018
Website melges24worlds2018.rvyc.bc.ca
Email melges24worlds2018@gmail.com
IM24CA media:
IM24CA Facebook for the most recent news.
IM24CA photogalleries in Flickr - search for "Melges Championships"
IM24CA Twitter - Melges_24
IM24CA Instagram - worldofmelges24
IM24CA Website  - melges24.com
For further information on the event , please contact:
Terry Stamper
Regatta Chair
Email: terrychristinestamper@yahoo.com
John Abel
IM24CA Championship Coordinator Western Hemisphere / Pacific Rim
Email: johnabel.sailing@gmail.com
Tara Smith
Media Relations and Social Media - Royal Victoria Yacht Club
tara@jeremysmith.ca
Piret Salmistu
IM24CA Administrator & Media Coordinator
Tel.: +372 507 7217
Email: piret@melges24.com