April 29, 2018 - Pdrtoroz, Slovenia - It has been a weekend of light sea breeze in the bay of Piran and Portoroz, but still the Melges 24 fleet, composed for this occasion of twenty-five boats from eleven countries, managed to complete a whole series of scheduled nine races for the second event of the 2018 Melges 24 European Sailing Series.
The fight for the podium has been tough until the very last race of the series, when the top teams were all tied in a bunch of points: with partial scores of 6-3-2, the American entry War Canoe (USA841) of Mike Goldfarb, at the first experience in the 2018 Melges 24 European Sailing Series, managed to defend the first place obtained in the previous days of racing affirming itself as a winner of the event of Portoroz. 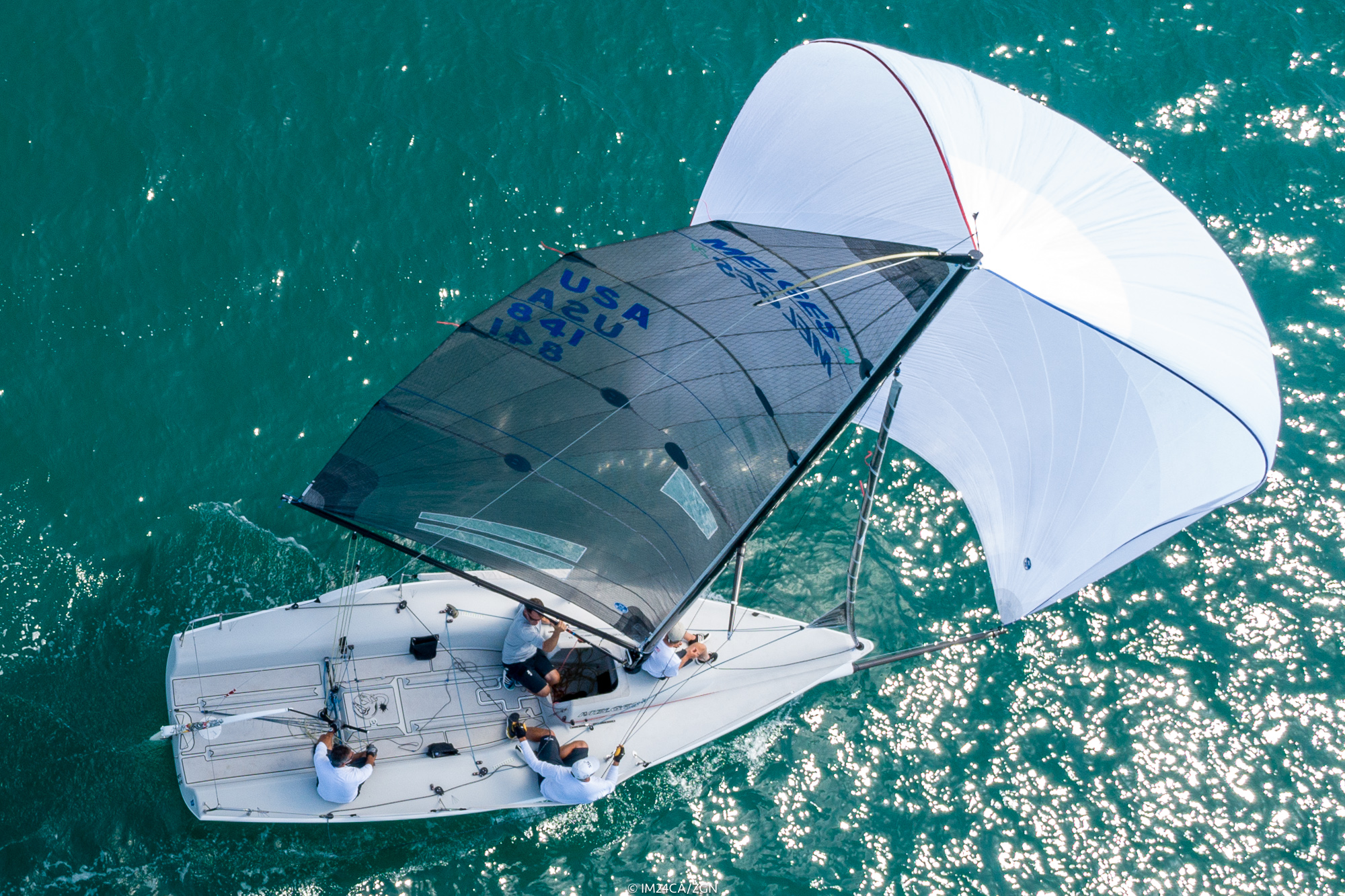 War Canoe (USA841) of Mike Goldfarb - photo Zerogradinord/IM24CA
"We are extremely happy with this result. We had been training a while in the USA with the events of Miami and Charleston before coming here: we plan a very busy season with the Melges 24 that is going to include both the Worlds in Victoria, Canada and the Europeans in Riva del Garda, Italy. For this reason it was essential to start measuring ourselves with the European fleet, to start knowing the teams and to perform well on Garda Lake. We will meet again in Torbole," stated Mike Goldfarb, owner and driver of War Canoe. Aboard of War Canoe in Portoroz were sailing also Morten Henriksen, Mark Strube and David Brink. 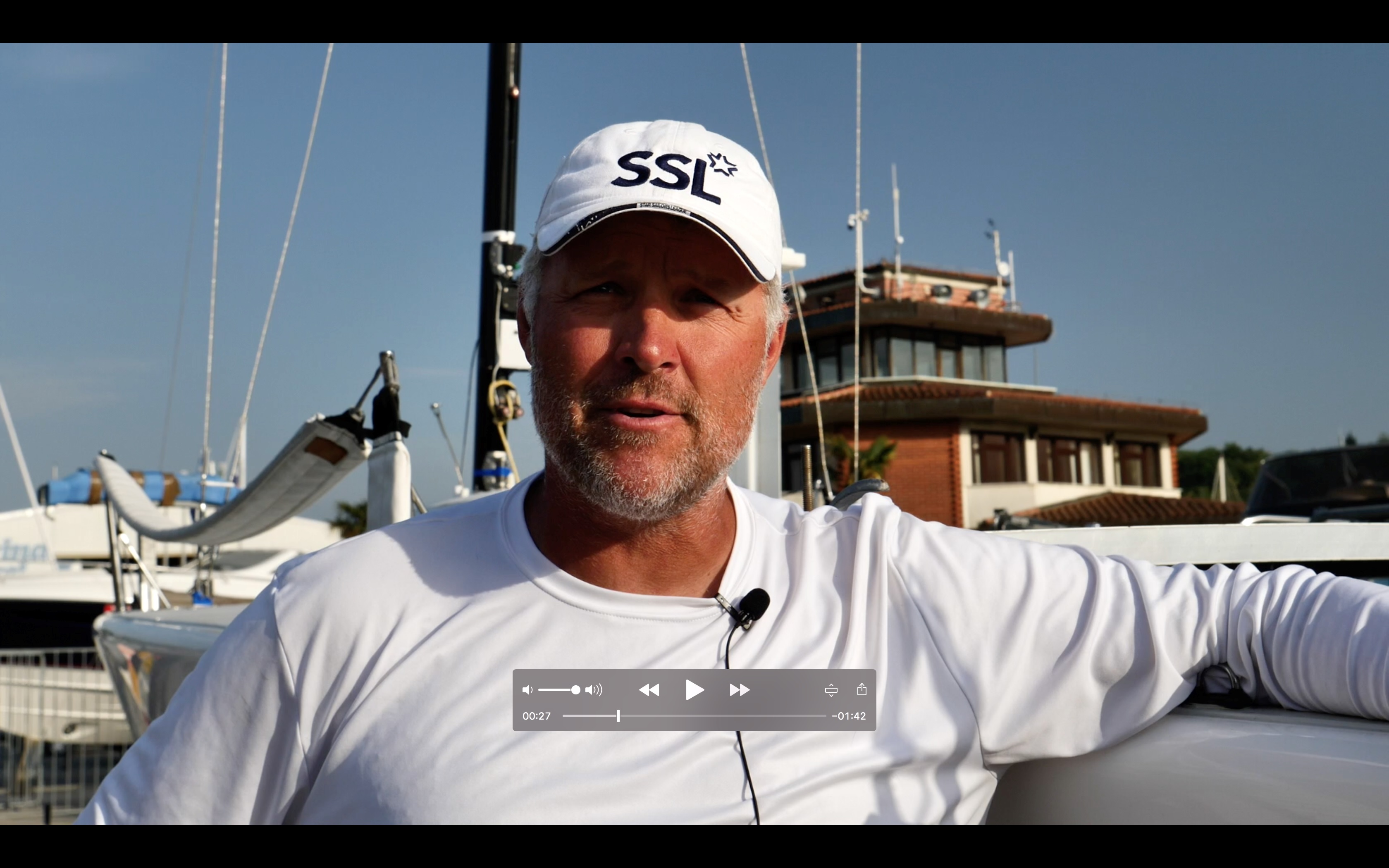 Interview with Mark Strube, crew of the War Canoe USA841 - video edited by Zerogradinord
At the back of War Canoe, the Estonian entry Lenny (EST790, 1-18-3): the crew by Tõnu Tõniste started climbing up the ranking on Saturday, benefiting from the light wind conditions, and managed to keep the positive scoreline also on Sunday. With a victory, an eighteenth (discarded) and a third as partials of the last day of racing, Lenny is not only silver medal in the overall podium, but also the winner in the Corinthian division. 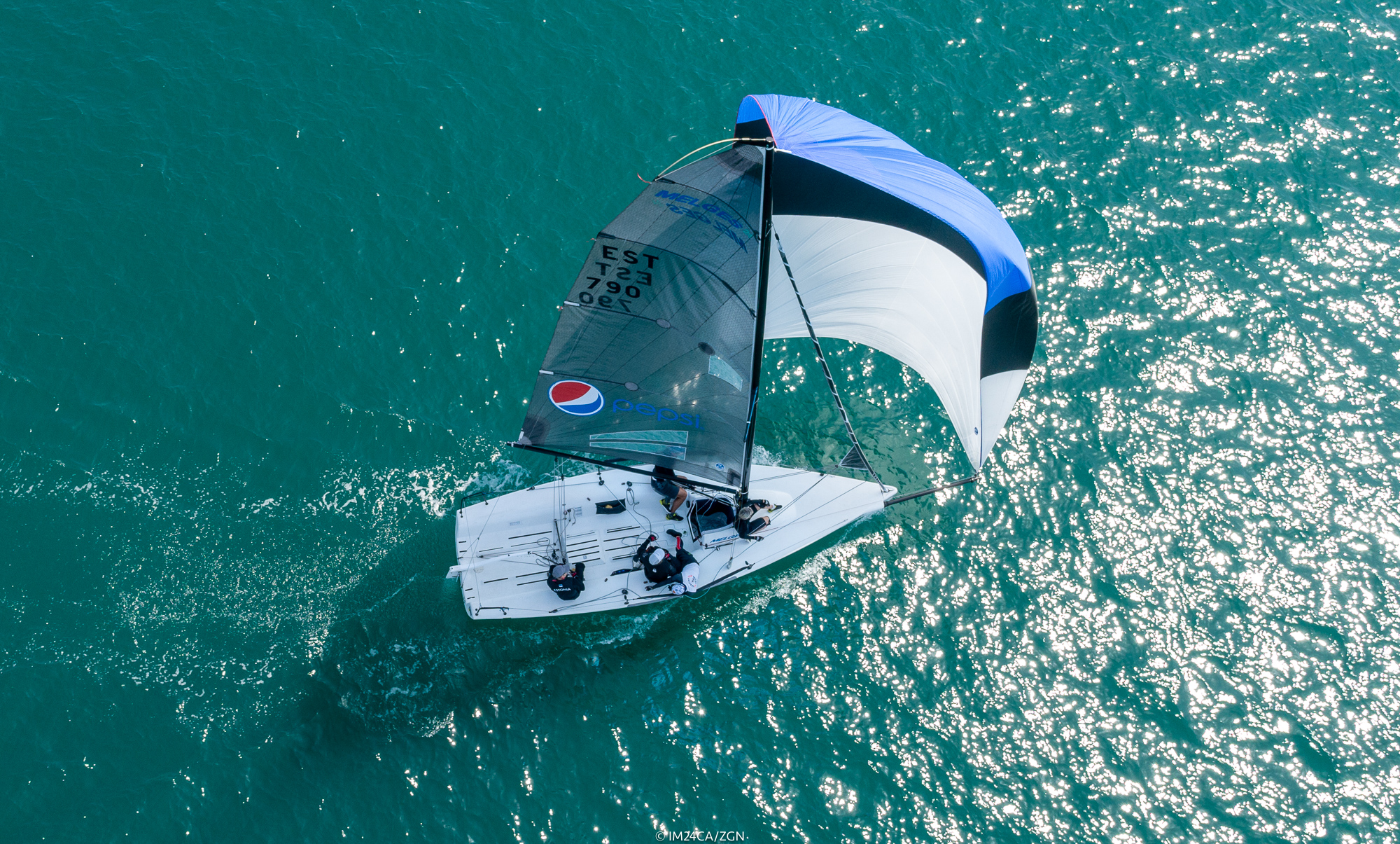 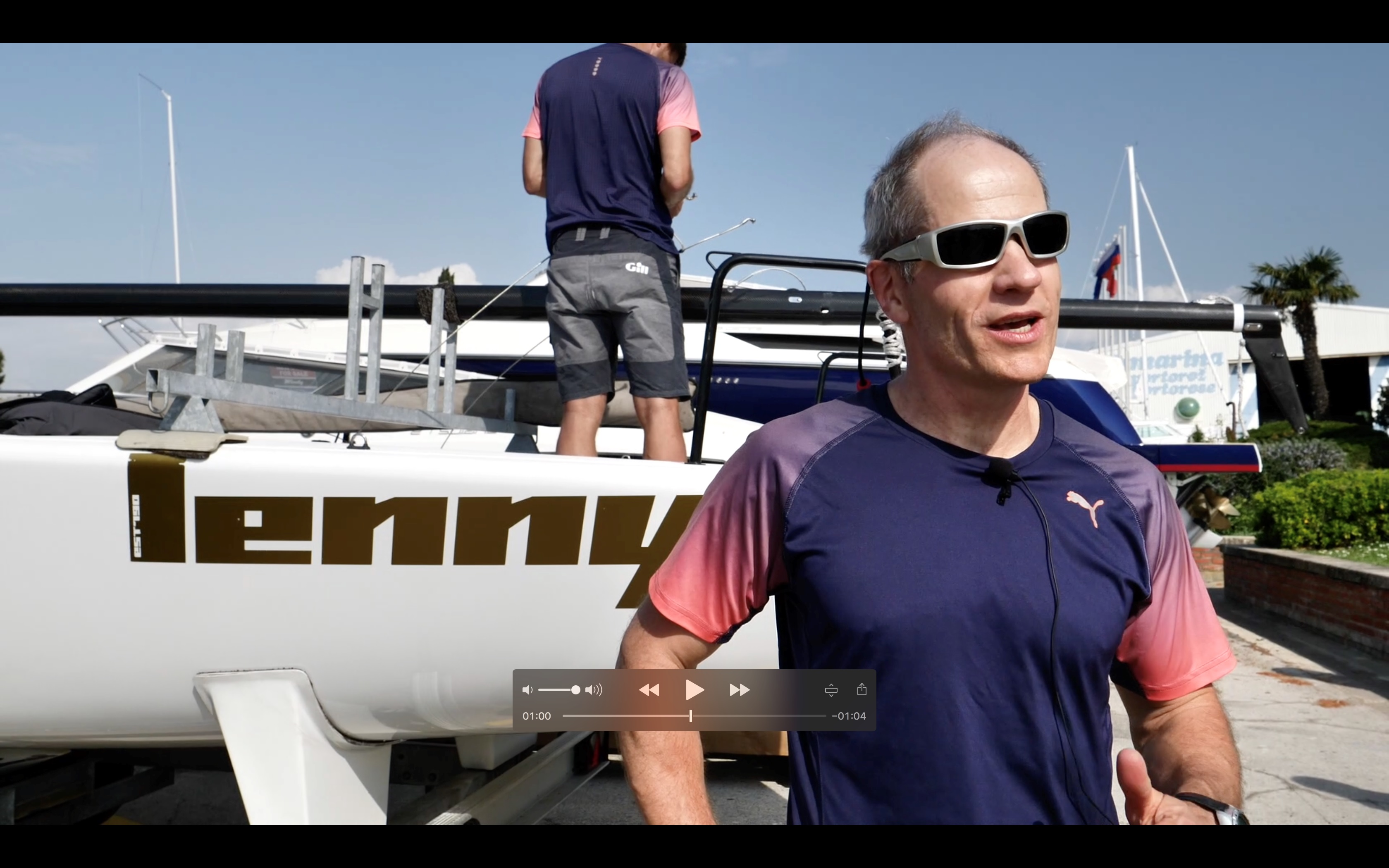 Interview with Tõnu Tõniste, owner and helmsman of Lenny EST790 winning the regatta in Corinthian division - video edited by Zerogradinord
"We are actually surprised with this result, we hadn't been sailing since the Worlds in Helsinki last year and we have also some new members in the crew: beginning with such a success is unbelievable," commented Tõnu Tõniste, helmsman of Lenny. "We will be competing in five events in total in 2018 and our top event will be the Europeans on Garda Lake. Before that, we will have some training on Garda, especially with the event of Torbole, to start testing the race course and measuring with the fleet. The Europeans will be an awesome event!" In addition to helmsman Tõnu Tõniste in the crew of Lenny were sailing Ants Haavel, Tammo Otsasoo, Kristen Pugi and Maiki Saaring. 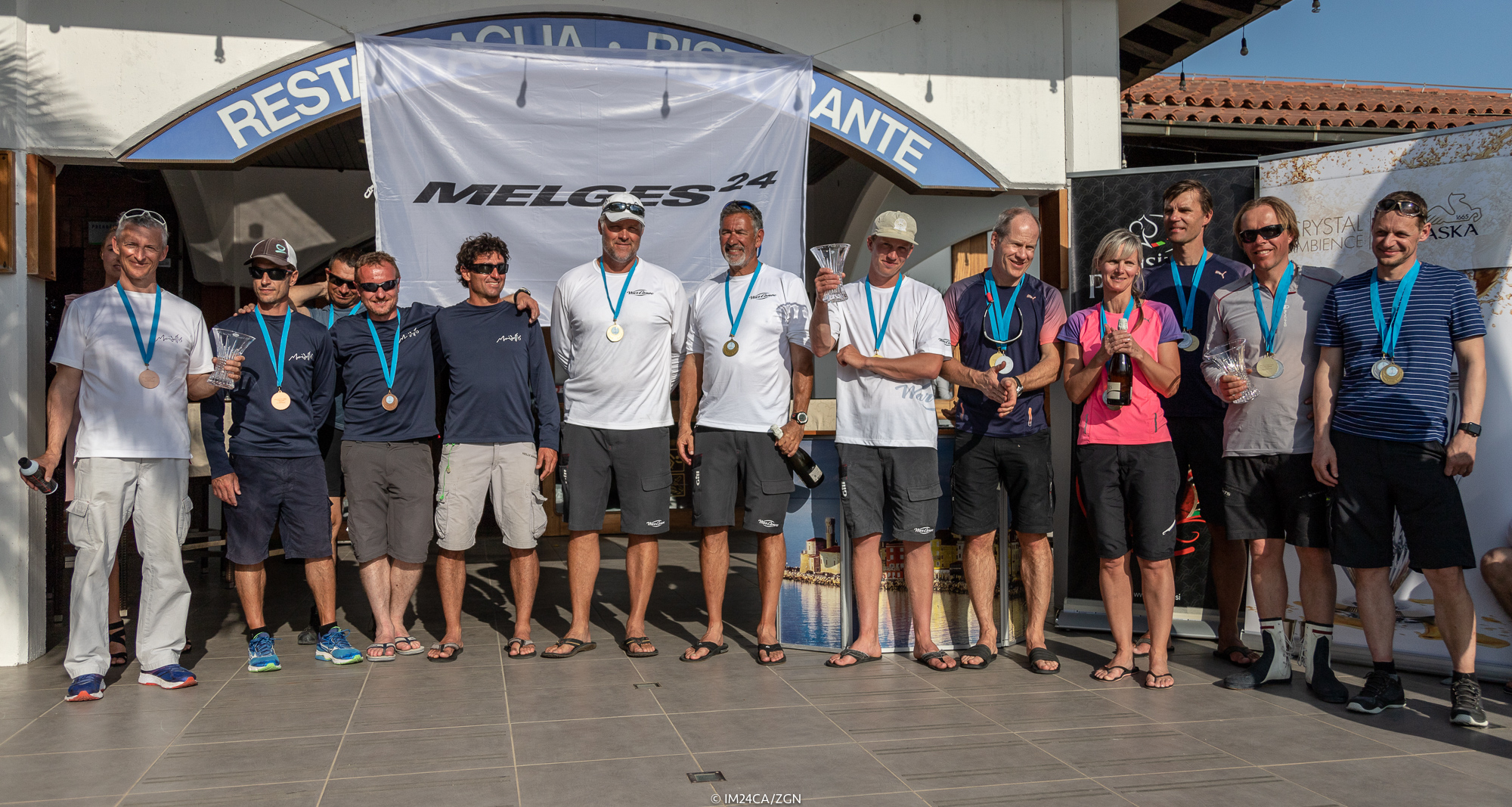 The overall Top 3 of the Marina Portoroz Melges 24 Regatta 2018 is War Canoe USA841, Lenny EST790 and Maidollis ITA854. Photo ©ZGN/IM24CA
Bronze medal goes to the reigning World Champions on board of Gian Luca Perego's Maidollis (ITA854, 4-1-7) with Carlo Fracassoli-Enrico Fonda tandem, very consistent all through the series but penalized by a black flag disqualification on Saturday. The top five is completed by Taki 4 (ITA778, 11-4-5) with Niccolo Bertola in helm and by FGF Sailing Team (HUN728, 14-9-4) helmed by Robert Bakoczy. 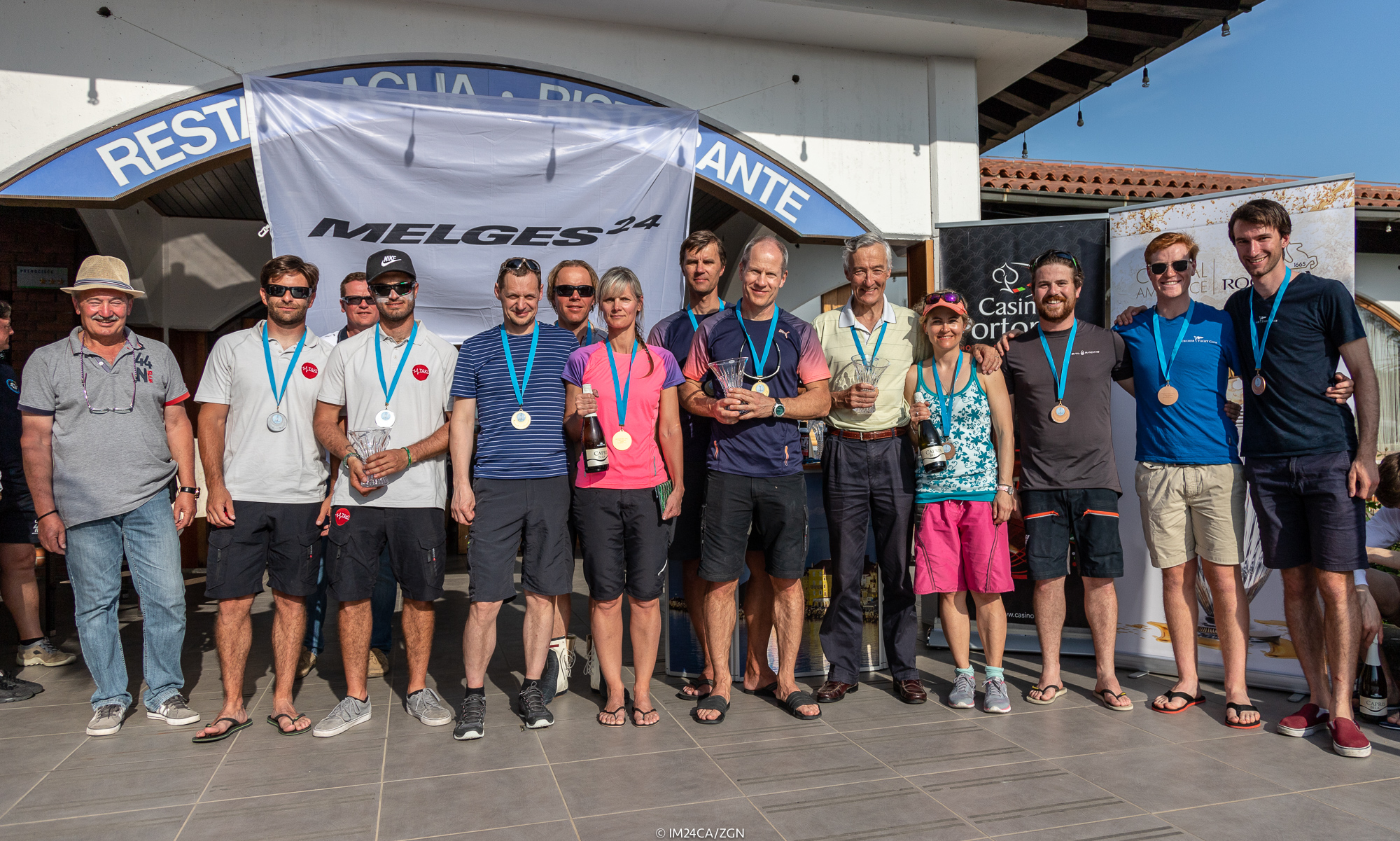 The Corinthian podium of the Marina Portoroz Melges 24 Regatta 2018 sees Lenny EST790, Taki 4 ITA778 and Andele SUI821. Photo ©ZGN/IM24CA
The Corinthian podium sees the already named Lenny earning the gold medal, with Taki 4 that closes in second and Swiss entry of Jörg Hotz Andele (SUI821, 25-7-9) in third. A special mention goes to the German crew of Michael Tarabochia's White Room (GER677, 22-2-1) with Luis Tarabochia in helm, protagonist of a very consistent weekend of sailing and also winner of the last race of the series that closes the event in fourth position among the Corinthians.
Special thanks of the International Melges 24 Class Association go to the event's hosts - Yacht Club Marina Portoroz' team lead by Branko Parunov and David Bartol and Marina Portoroz itself. Excellent job from IRO Bojan Gale and his Race Committee while executing all nine scheduled races of the regatta.
The next big event of the Melges 24 fleet will be in a month time in Victoria, Canada - the 2018 Melges 24 World Championship, while the Melges 24 European Sailing Series will resume on June 29th to July 1st in Torbole, where the crews will have the possibility to start testing the race course for the Melges 24 Europeans to be held in Riva del Garda on August 3-10.