April 26, 2018 - Portoroz, Slovenia -  After the 2018 season opener in Punta Ala in March, the international Melges 24 fleet gets back on the water - this time moving to the Adriatic Sea and benefiting from the wonderful hospitality of Yacht Club Marina Portoroz, where from April 27th to 29th the second event of the Melges 24 European Sailing Series 2018 will be raced, in coincidence with the Alpe Adria Cup. 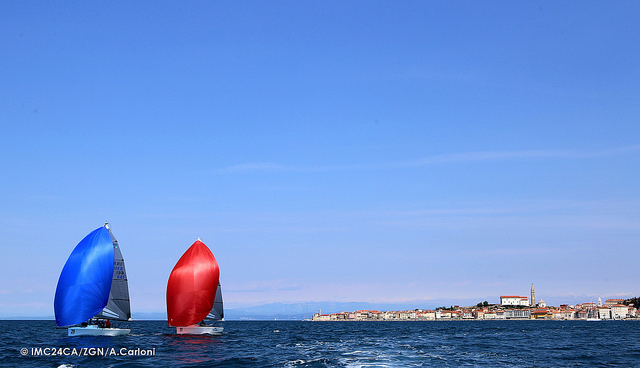 Melges 24 regatta in Portoroz in April 2017. Photo © IM24CA/ZGN/Andrea Carloni
Twenty-six boats from eleven countries have already joined the entry list even if there will be time until April 27th to register late entries. Among them we find the whole podium of Punta Ala, being composed by the winner Andrea Racchelli with his Altea ITA722, also the winner of 2017 Portoroz regatta; the Hungarians aboard FGF Sailing Team HUN728 with Robert Bakoczy in helm and the current holders of the Corinthian World Champion title, the Italian crew of Taki 4 ITA778 by Marco Zammarchi with Niccolò Bertola in helm.
From the Corinthian podium positions of Punta Ala, also Akos Csolto's Seven-Five-NineHUN759 and Gill Race Team GBR694 of Miles Quinton-Geoff Carveth tandem will make their return to Portoroz, trying to gain important points looking forward to the final overall ranking of the circuit.
Among the new entries at their first appearance in 2018, we find Gian Luca Perego's MaidollisITA854 with Carlo Fracassoli-Enrico Fonda tandem, World Champion in Helsinki 2017, and the former Corinthian World Champions on board of Estonian boat Lenny EST790, with Tõnu Tõniste helming. Also, wonderful to see a team from USA participating Portoroz regatta - Mike Goldfarb's War Canoe USA841 from the Corinthian Club Seattle.
The fleet will miss the Corinthian winner of past two years in Portoroz - Kesbeke/SIKA/Gill NED827 with Roland Veraar in helm and the next winner can now leave their footprints on the Hall of Fame of the traditional Melges 24 Portoroz regatta.
Entries have been drawn from Austria, Croatia, Denmark, Estonia, Germany, Great Britain, Hungary, Italy, Slovenia, Switzerland and USA, which promises a tremendous competition for owners and crew alike.
See the entry list
"This is a signature event for the YC Marina Portoroz and we are constantly exploring ways to accommodate the needs of our guests. To encourage participation and make it more convenient for sailors, this year we introduced customised boat storage packages for teams that need a training base before the regatta or those willing to take part at nearby events afterwards, in particular at Alpe Adria Cup in Trieste and ORC Sportboat European Championship in Portopiccolo," says event manager Branko Parunov.
Over the last decade, he and his tireless organisational team grown the event from humble roots into one of the largest annual sailing competitions in the country, making it a firm favourite with the public and the sailors. Among competitors, the event is known for its impeccable race management and fantastic hospitality, while the close proximity of the racecourse brings hundreds of spectators to shores to enjoy the action.
With weather conditions that recall for summer in the bay of Piran, with light wind conditions that will create great tactical challenges for all the crews and great parties organized every day after racing, the fleet is enthusiastic to make its fifth return to Portoroz.
Races will start on Friday, April 27th, at 12.00, while the skippers' briefing will be held at 10.30.
Full press release
Media:
Follow  IM24CA Facebook   for the most recent news.
Event in Facebook
Event at the website of the YC Marina Portoroz
Videos in Facebook
IM24CA photogalleries in Flickr  -  search for "Melges Championships"
IM24CA Twitter  -  Melges_24
IM24CA Instagram  -  worldofmelges24
IM24CA Website   -  melges24.com