March 25, 2018 - Punta Ala, Italy - The northerly wind Maestrale is the king in the last day of racing in Punta Ala, where the first event of the Melges 24 European Sailing Series 2018 has just come to an end. The Race Committee presided by PRO Alessandro Testa, with the logistical support of Yacht Club Punta Ala (YCPA), managed to make the fleet complete nine races, a full series that satisfied all the Melges 24 sailors and their hunger of wind after the long winter break. 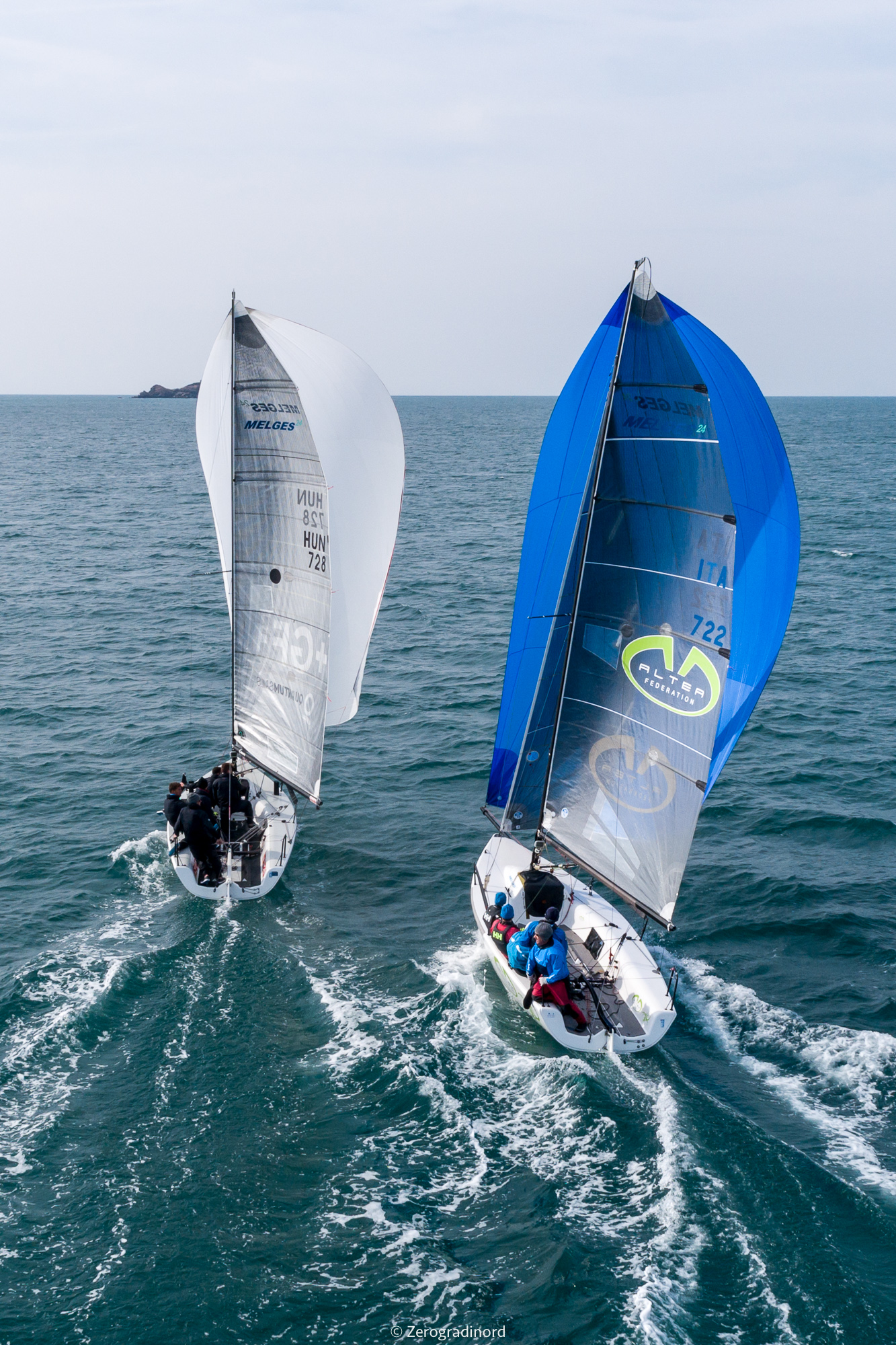 Altea ITA722 and FGF Sailing Team HUN728 in Punta Ala - photo (c) Zerogradinord / IM24CA
After a tough duel that went on, tack after tack, until the last race of the series, Altea (ITA722, 3-1-4) by Andrea Racchelli managed to leave the Hungarian entry FGF Sailing Team (1-2-5 today) with Robert Bakoczy in helm at his back, gaining the first victory of the season. 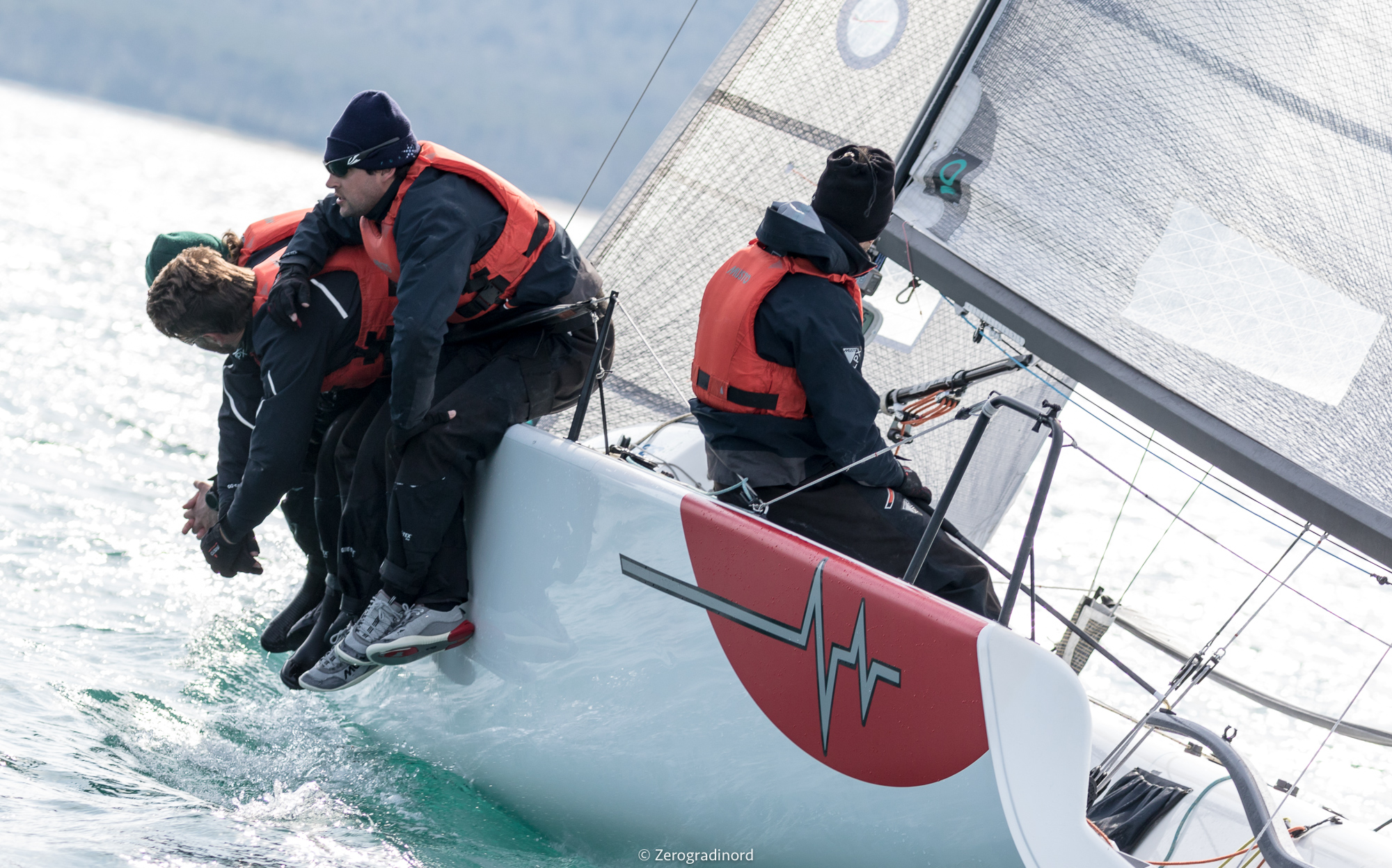 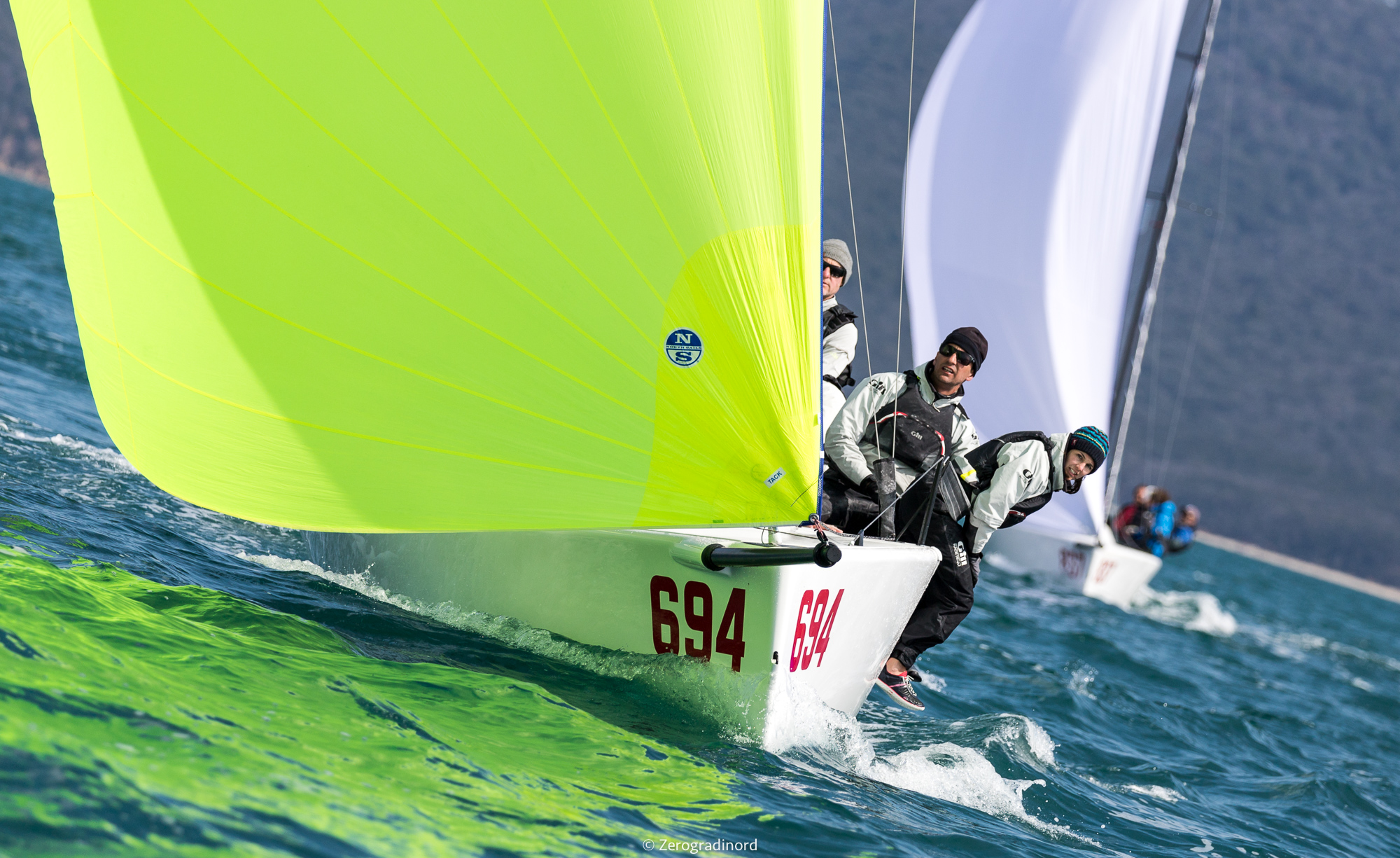 Gill Race Team GBR694 of Miles Quinton with helmsman Geoff Carveth. Photo (c) Zerogradinord / IM24CA
The Corinthian podium's second step is occupied by Gill Race Team (GBR694, 5-3-3) by Miles Quinton with helmsman Geoff Carveth, one of the historical members of the Melges 24 Class: after not having missed neither one event in the 2017 edition of the European Sailing Series, the English team is already demonstrating its wish to be among the leaders of the Class also in 2018. The Corinthian podium will be completed by the Akos Csolto's Seven-Five-Nine(HUN759, 6-4-7) that concludes the event in seventh position overall. 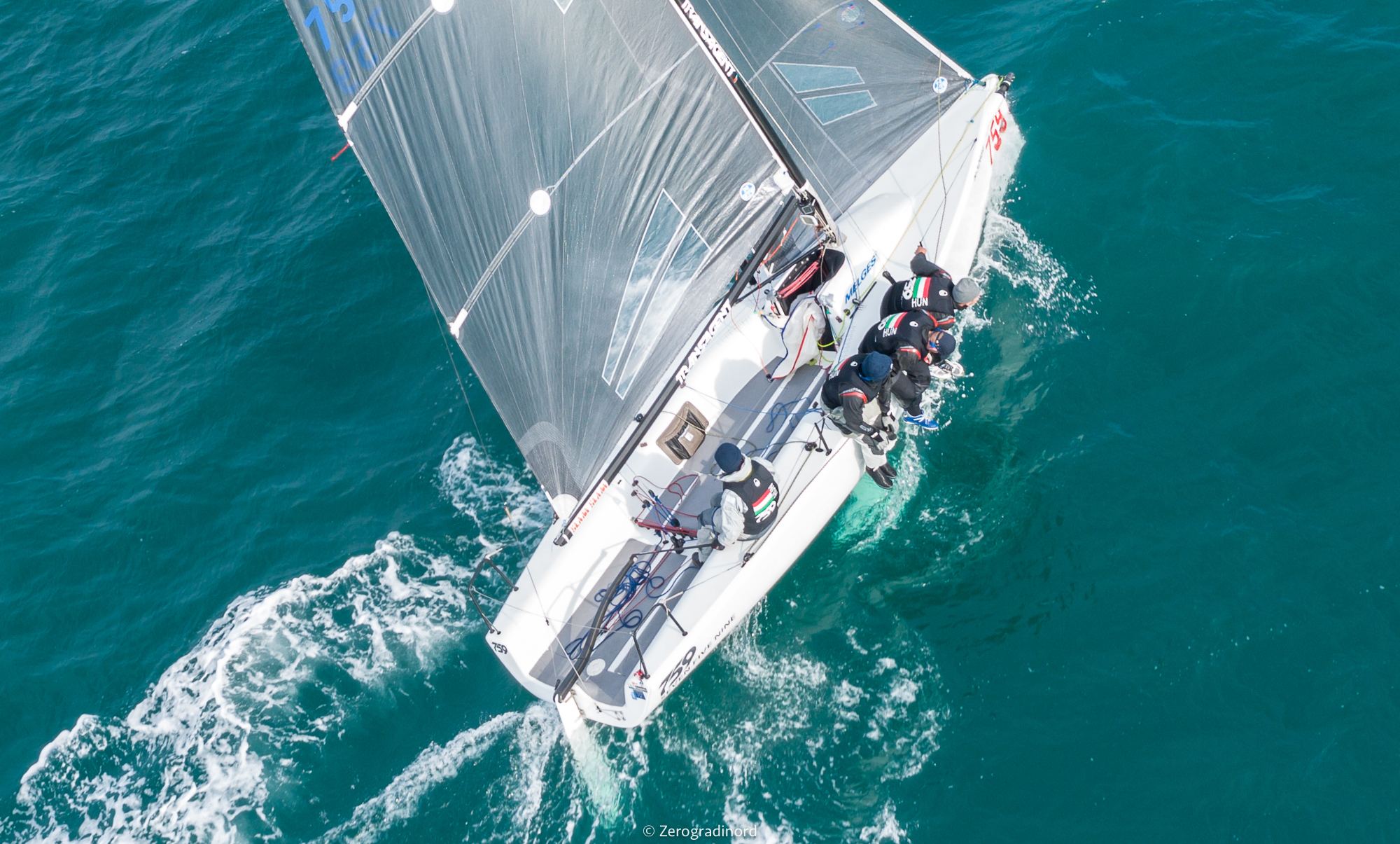 The finale of this first event has been sparkling for the Danish entry Up Up Up (DEN837, 10-8-1) of Bo Boje Pedersen and match racer Joachim Aschenbrenner calling the tactics: in the very last race of the series, the team found such a good rhythm that managed to score its first and only bullet of the event, a great drive to perform well in the rest of the season that still has to come.

Replicating his victory of 2009 when Melges 24 international fleet was in Punta Ala last time, Andrea Racchelli, also President of the Melges 24 Italian Class Association, was happy to see the Melges 24 teams in Punta Ala again. "This is a great venue and it's great to see that the teams from all over the Europe took this long ride to Punta Ala to start their season here. There will be several Melges 24 events to follow in Italy towards the season's highlight - Europeans in Riva del Garda in August - and we are looking forward the teams to enjoy the sailing venues in Italy both before and after the Europeans!" 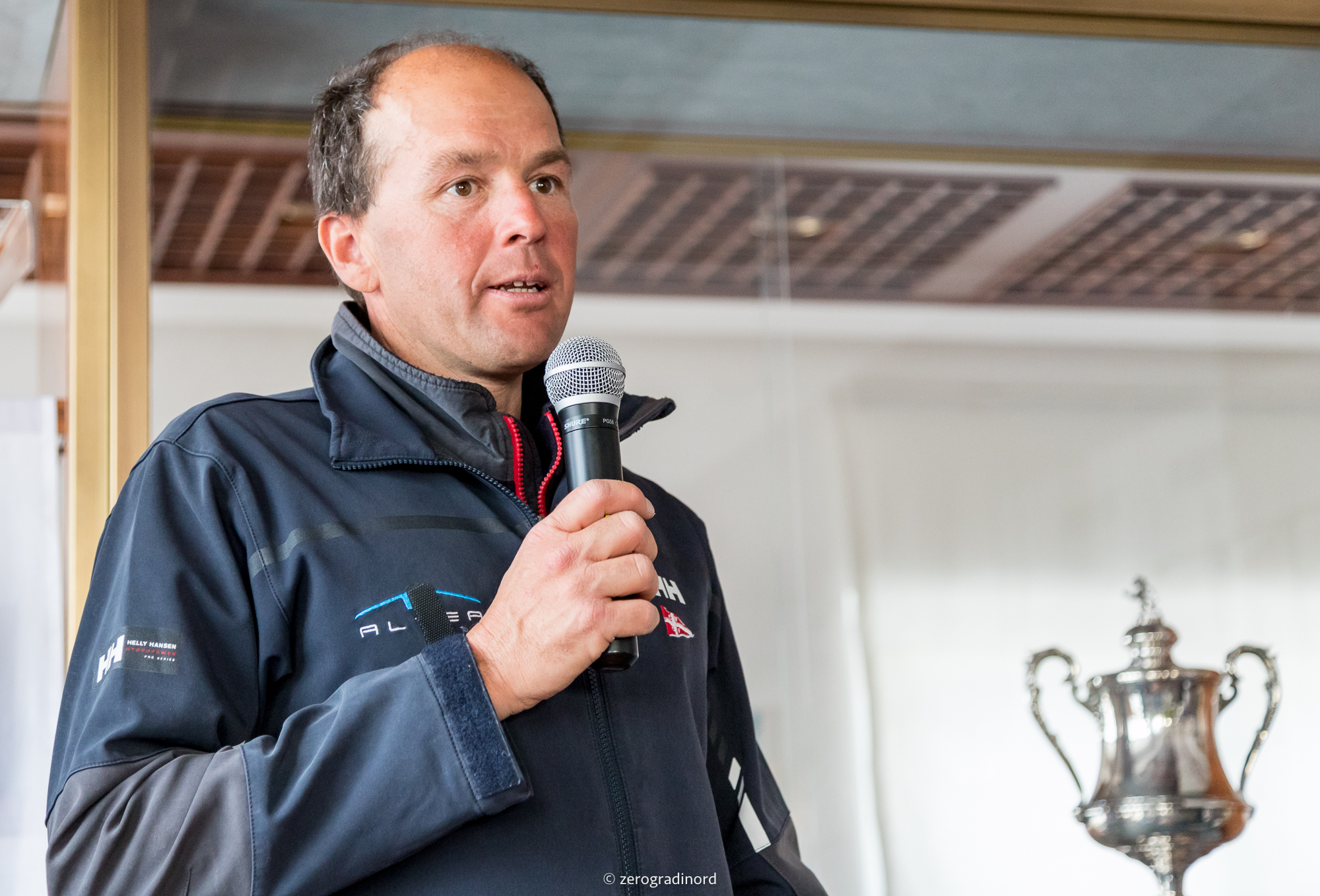 Andrea Racchelli, the President of the Melges 24 Italian Class Association - Photo (c) Zerogradinord / IM24CA
Miles Quinton, Vice Chairman of the International Melges 24 Class Association was encouraging the teams during the prize giving to enter the Europeans in Riva to make it as unforgettable and remarkable event as were the Worlds of 2012 in Torbole and was thanking the YCPA for their great hospitality, excellent race management and event organization.
Filippo Calandriello, Sporting Director of YCPA was happy to see such spectacular and competitive boats of Melges 24 fleet in Punta Ala after nine years hoping to welcome the international fleet in Punta Ala also next year approaching to the 2019 Worlds in Cagliari.

After the prize giving held in front of the historical Luna Rossa's Louis Vuitton Cup from 2000 in the Yacht Club Punta Ala, the crews made their return to their  yacht clubs to wait for the next event of the European season, that will be held in Portoroz (Slovenia), from April 27th to 29th.
Media coverage of the event in Punta Ala was provided by the media partner of the International Melges 24 Class, Zerogradinord with Mauro Melandri and Silvia Gallegatti, and Melges Europe is in Punta Ala to support and serve the teams.
See the full results
The photos of Day Three by Zerogradinord/IM24CA
Media:
Follow IM24CA Facebook for the most recent news.
Event in Facebook
Webpage of Punta Ala Yacht Club
Videos in Facebook
IM24CA photogalleries in Flickr - search for "Melges Championships"
IM24CA Twitter - Melges_24
IM24CA Instagram - worldofmelges24
IM24CA Website  - melges24.com

2018 Melges 24 European Sailing Series consists of the six events altogether. The season opens in Tuscany, in iconic Punta Ala and will continue in Slovenia in April (27-29), with the fleet heading to Portoroz that welcomes the Melges 24 class for the fifth time after the successful events of the past four years. The 2018 Melges 24 European Sailing Series will then move on to the internal waters, with a double appointment on the Garda Lake: Torbole(June 29 up to July 1), where the Melges 24 international fleet will return after the 2012 Worlds with the record number of 127 entries, and Riva del Garda (August 3-10) for the Melges 24 European Championship. The season will end with the Melges 24 Italian Championship to be sailed on the Como Lake in Domaso (September 14-16), and with the Lino Favini Cup, also valid as Swiss Open Championship held in Luino (October 12-14)
More information and the  Notice of Race of the series can be found at melges24.com/europeansailingseries
For further information on the event , please contact: