April 28, 2018 - Portoroz, Slovenia - Second day of light breeze on the bay of Portoroz, where the Melges 24 Fleet is competing for the second act of the 2018 Melges 24 European Sailing Series. Despite the AP flag hoisted early in the morning in Yacht Club Marina Portoroz clubhouse, the Race Committee presided by Bojan Gale still managed to benefit at the best from the sea breeze that filled in around midday, adding three more races to the series and making the discard of the worst result of the series come into play. 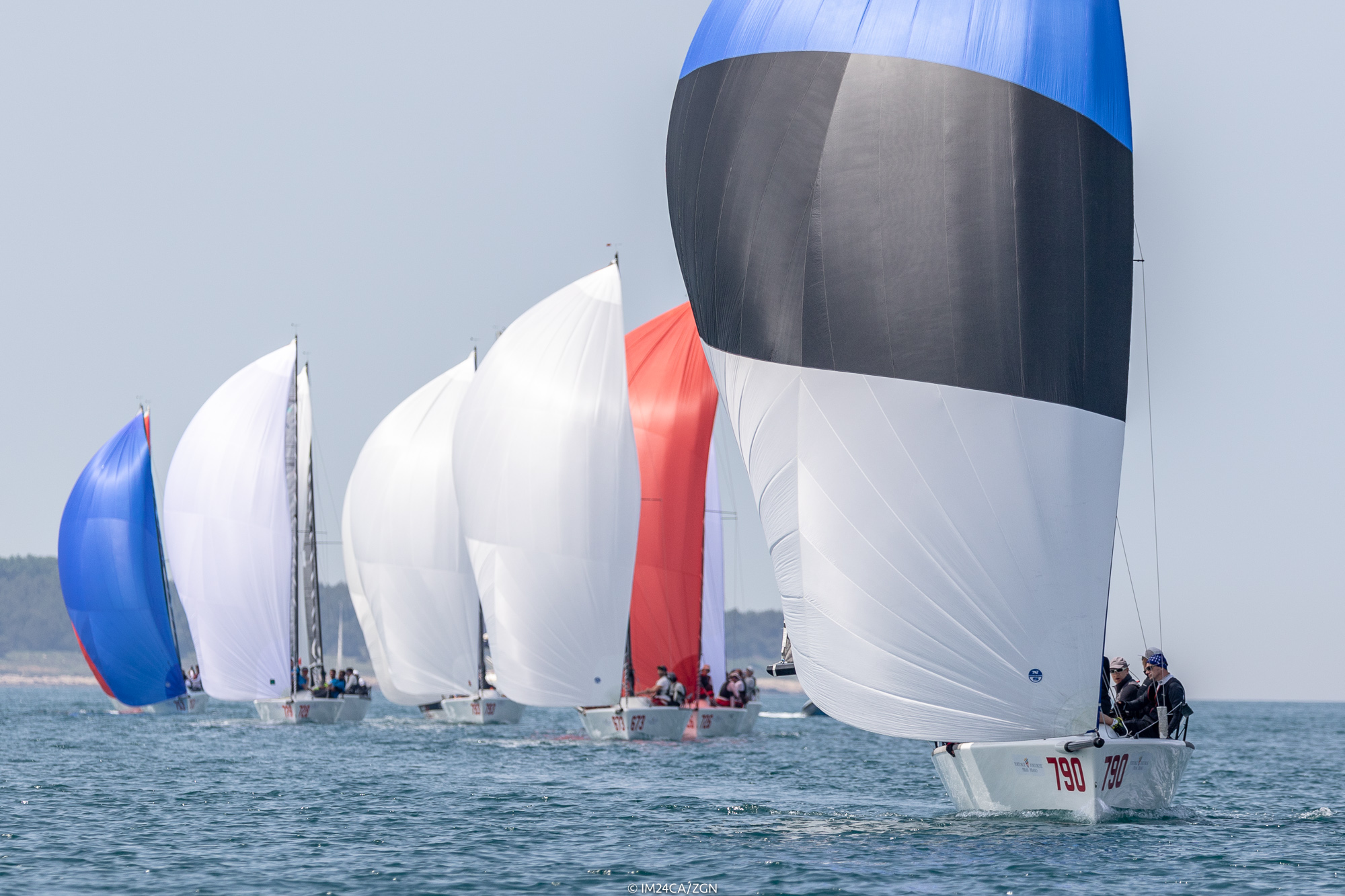 Lenny EST790 of Tõnu Tõniste - photo ©ZGN/IM24CA
Boat of the day was the Estonian entry Lenny (EST790), competing in the Corinthian division with the twice-olympian Tõnu Tõniste in helm, that could interpret at the best the light wind conditions to score a bullet and two third results as partials of the day, climbing up from the sixth position overall of yesterday to the second place of the overall ranking and first in the Corinthian division. 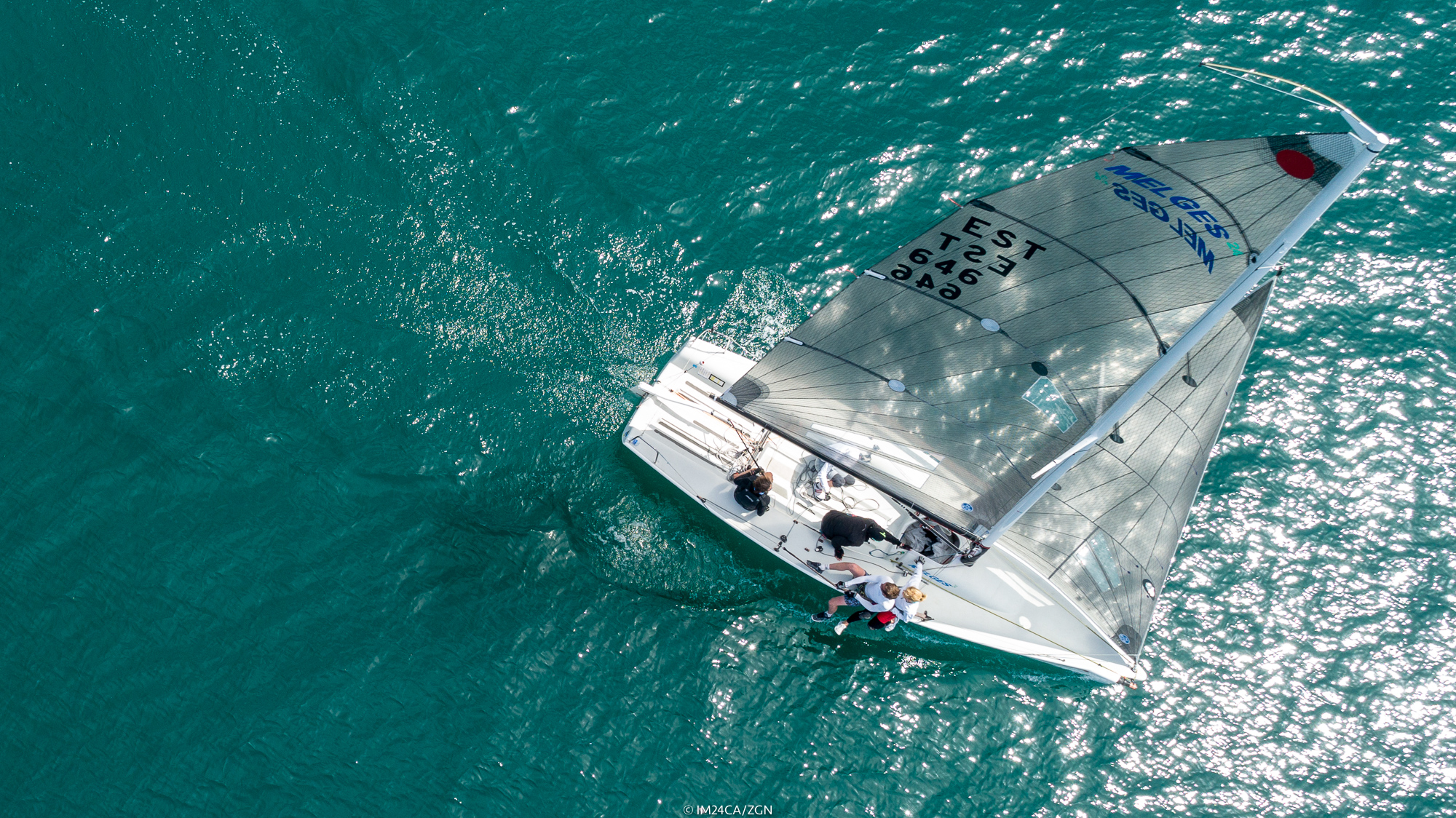 Yes Sir No Sir EST646 by Tõnis Haavel - photo ©ZGN/IM24CA
The Estonian flag flew once again in the second race of the day, this time thanks to Yes Sir No Sir (EST646, UFD-1-BFD) with Tõnis Haavel in helm that found a sparkle of success between two disqualifications for anticipated starts in races number four and six of the series. 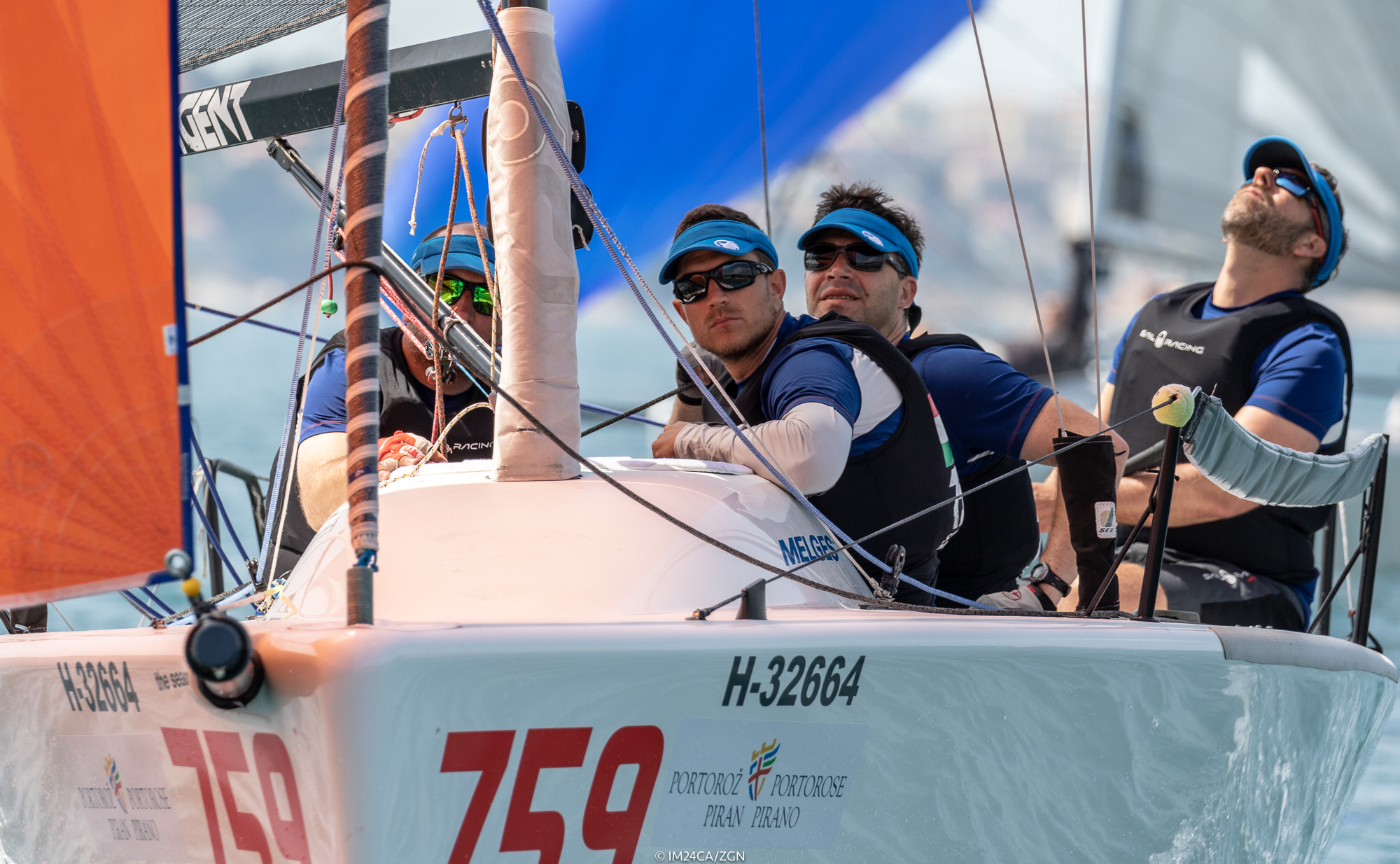 Seven_Five_Nine HUN759 - photo ©ZGN/IM24CA
The last day of the series was a success for another Corinthian crew, the Hungarian entry Seven_Five_Nine (HUN759, 14-8-1) by Akos Csolto that managed to leave behind, in the order, General Lee (ITA793, 10-21-2) by Mario Ziliani and the already named Lenny by Tõnu Tõniste. 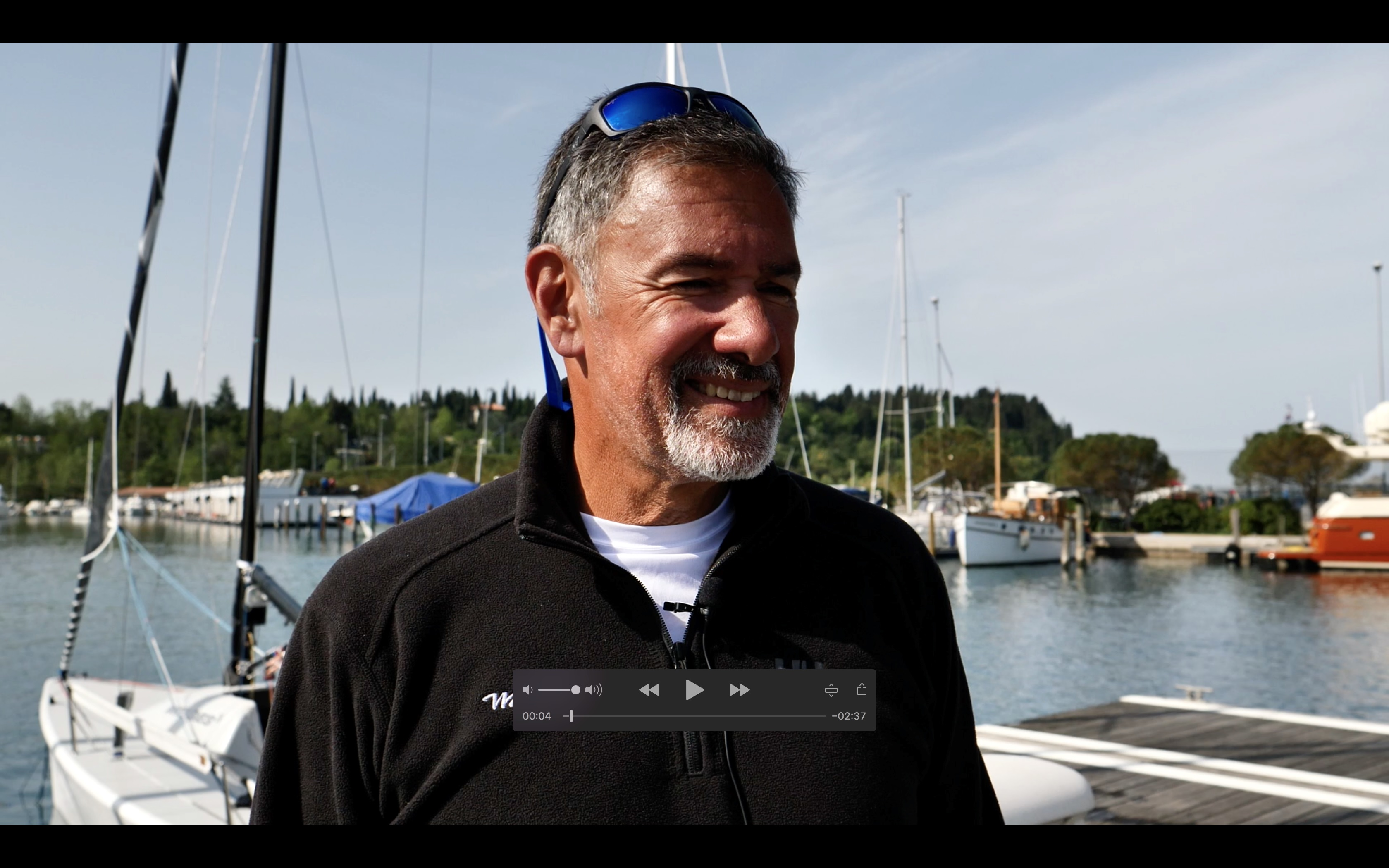 Interview with the current leader - Mike Goldfarb, the owner and helm of War Canoe USA841 - video edited by Zerogradinord

The overall situation sees War Canoe (USA841, 2-11-9) by Mike Goldfarb maintain also today the control of the top of the ranking, followed by Lenny and Taki 4 (ITA778, 4-6-5) with Niccolo Bertola helming. Maidollis (ITA854, 13-2-BFD) by Gian Luca Perego with Carlo Fracassoli helming occupies fourth position with a margin of 7 points over General Lee.

After the Corinthian victories of today, the ranking of the division reserved to non professionals, sees Lenny in control with a margin of 3 points over Taki 4 and of 12 points over Andele (SUI821, 3-7-8) by Jörg Hotz, which was occupying fifth place after the races of first day. Hungarian Seven_Five_Nine occupies fourth place, while White Room by Luis Tarabochia (GER677) closes the top-five. 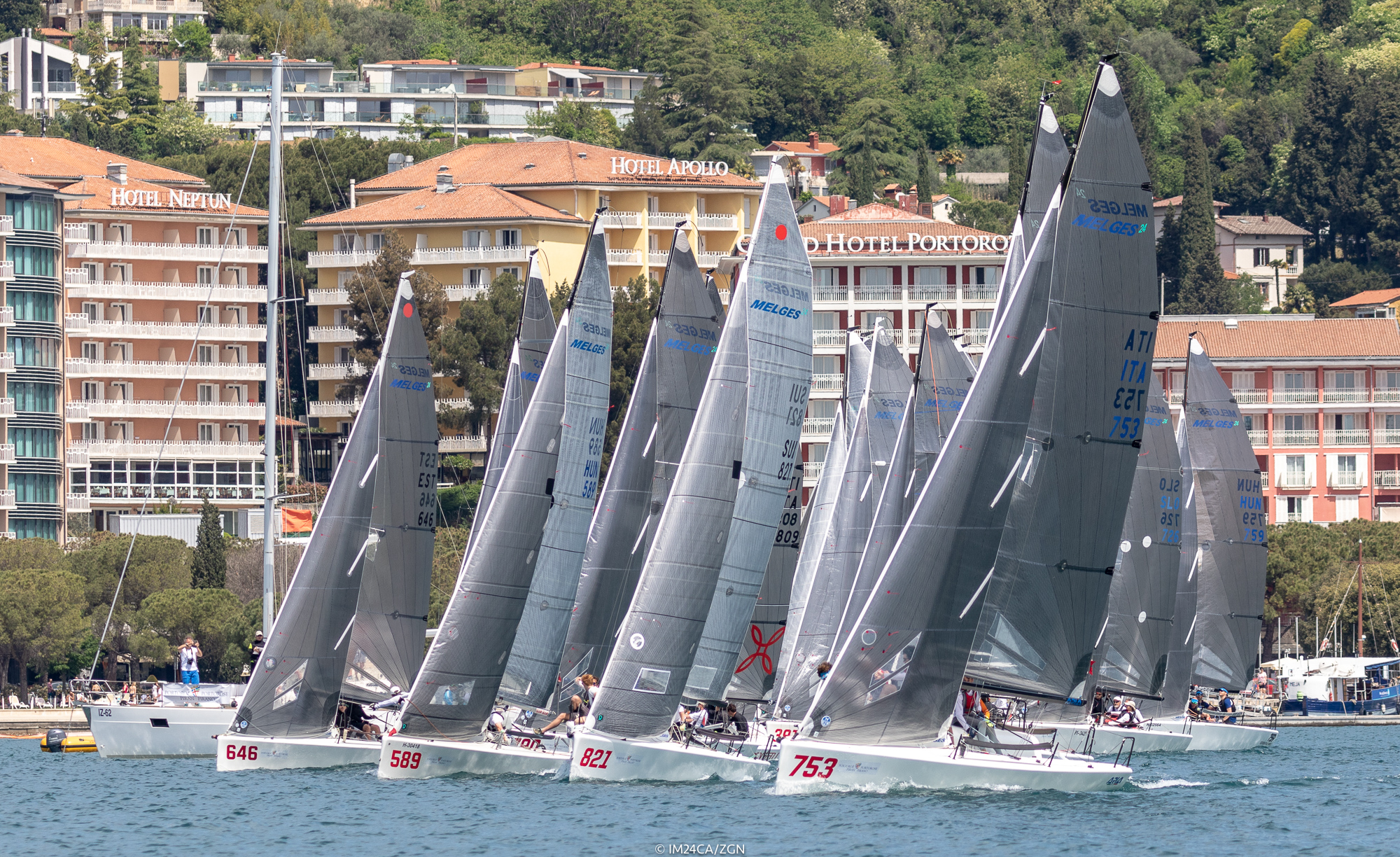 Melges 24 European Sailing Series regatta in Portoroz - Day Two. Photo ©ZGN/IM24CA
On Sunday races will resume at 11 am: a maximum of three regattas can be sailed to have a whole series of nine, but no more starts can be given after 4pm. It will be a great battle, with seven crews all tied in 13 points, to see which crews will manage to get on the final podium.