April 9, 2017 - Charleston, S.C., U.S. - Porter wins impressive record-breaking seventh Melges 24 National title, Shannon takes home Corinthian top honors. The final day at of the 2017 U.S. Melges 24 National Championship hosted by the Charleston Yacht Club (ChYC) commenced as originally forecasted - light to almost no breeze. Plenty of sunshine and warmth prevailed, but very little on the wind horizon resulting in an immediate on-shore postponement. PRO Hal Smith kept teams up-to-date on the half-hour, every hour until it was realized that there was no hope for any racing on the final day in Charleston. 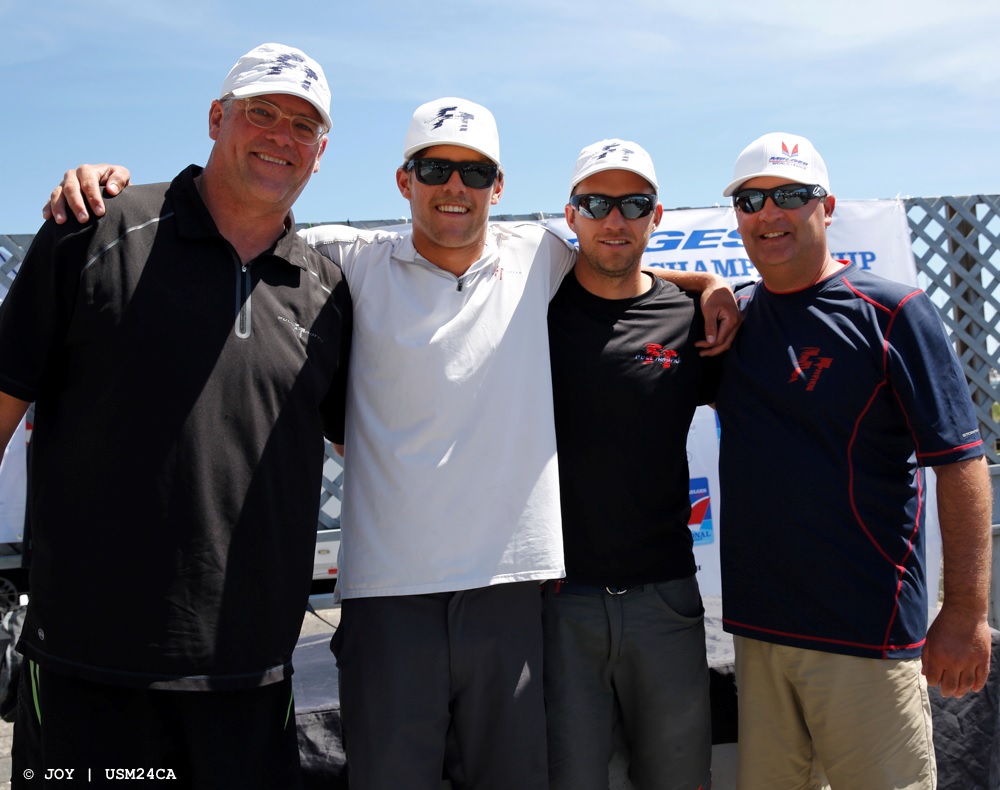 That said, the results from Saturday stand as final and Brian Porter on Full Throttle (USA-849) has won his seventh Melges 24 U.S. National Championship title - an accomplishment that has barely been challenged here in the United States. 2016 National Champ Bora Gulari has won the trophy only twice (2011, 2016) - no one yet has come closer to reaching that same number of wins.

Porter was joined by tactician Andy Burdick, his son R.J. Porter and fellow 2013 World Champion crew member Matt Woodworth. While accepting his award, Porter introduced and thanked his team, the Race Committee for their efforts particularly on Friday in the big breeze, and of course, all the restaurants in Charleston.

In second overall, is John Brown's Blind Squirrel (USA-547), which is quite a stellar achievement as he has been in the fleet for less than two years. Completing the overall podium is Kevin Welch's Mikey (USA-838). 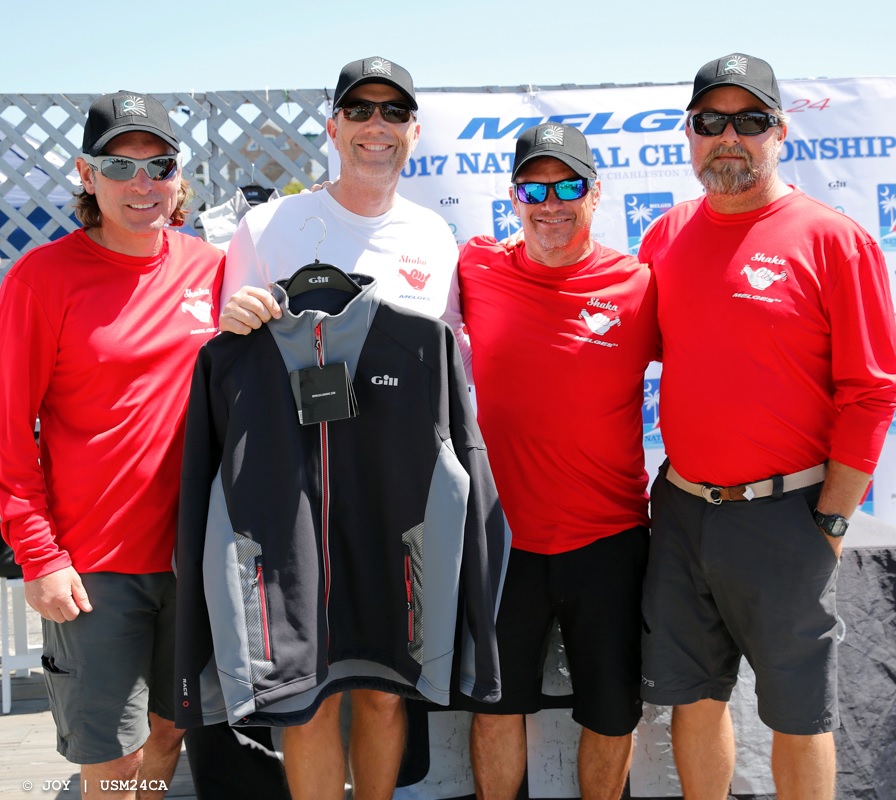 KC Shannon with Mike Miller, Doug Nickel and Tom Sawchuck on 'Shaka' (USA-801) - a team that has worked so hard to rise to the top of the Corinthian division.  - photo (c) JOY / USM24CA

A huge round of congratulations goes out to KC Shannon on Shaka (USA-801) - a team that has worked so hard to rise to the top of the all-amateur division. Mike Miller, Doug Nickel and Tom Sawchuck sailed as crew. "I'm really in disbelief. I can count on my hand how many races/regattas I've ever won," said Shannon. "This is better than any dream I could come up with in the Melges 24. We've taken our lumps over the years, so with this win, we know we are really blessed. We're looking forward to coming back for more by sailing at Race Week."

At the prize giving, each crew member of the top three teams in each division took home some amazing Gill Race wear, customized with their insignia. Congrats also to George Haynie Firewater (USA-687) as he won the jib given by Quantum to a ranked Corinthian team.

The 2017 U.S. Melges 24 National Championship was Act 2 of the Quantum World Winter Series (QWWS), and is Stage 1 of the 2017 NorAm Tour. The 2016/17 QWWS wraps up in a couple of weeks at Sperry Race Week. As for the NorAm Tour, things are just getting going. The U.S. Nationals was Stage 1. The second Stage takes place on July 19-22 at the Gorge/Cascade Locks, Ore. -  NorAm Championship. The 2017 Canadian Nationals serves as the third and final Stage of the 2017 NorAm Tour. Online registration is currently open for both events.

THE NEXT STEP: BACK TO CHARLESTON AND BEYOND
The next stop on the 2016/17 Quantum World Winter Series is Sperry Charleston Race Week taking place on April 20-23. This spectacular event will welcome another 25 teams back to Charleston. Another regatta to put on your calendar as a must do event post-Charleston is the Southeast Inland Lake Championship on May 5-7. Lake Lanier Sailing Club puts on a great regatta, so don't miss out on this chance to race in North Georgia. Lake Lanier is home to about a dozen teams.

THANK YOU! THANK YOU!
The U.S. Melges 24 Class Association (USM24CA) is grateful to all the competitors that traveled to Charleston to race at Nationals, also to Event Chairman Randy Draftz, PRO Hal Smith and the entire Charleston Yacht Club (ChYC) for the incredible hospitality, not to mention all the volunteers that gathered to make this Championship the very, very best! The USM24CA would like to further extend many thanks and recognize National Championship sponsors Quantum Sails, the Charleston Yacht Club, Coral Reef Sailing Apparel, Gill North America, the Charleston Visitors and Convention Bureau, and Goslings Rum. Thank you all for your support!

PERFECTLY PARTNERED
The USM24CA would like to extend many thanks to National Championship sponsors including World Winter Series title sponsor Quantum Sails, the Charleston Yacht Club, Coral Reef Sailing Apparel and, the Charleston Visitors and Convention Bureau. The Class and event are super grateful in particular, for the support from Quantum for the World Winter Series with product. Gill was providing great prizes to the winners in the form of custom technical gear. Gosling's Rum was there to make sure no one goes thirsty as they served up the best Dark'n Stormies in the world!