April 22, 2017 - Portoroz, Slovenia – Who would wish more than sunshine and the blue sky from the nice spring morning? Here in Portoroz, Slovenia on the second day of the 2017 Melges 24 European Sailing Series first regatta the sailors would have wished some wind to go to sailing, but instead AP was hoisted by PRO Bojan Gale until breeze came around midday. Southwester of 5 knots was picking up to 8-10 knots and the Race Committee was lucky to manage four fair races even the wind was getting weaker and weaker closer to the evening making the conditions very tricky. 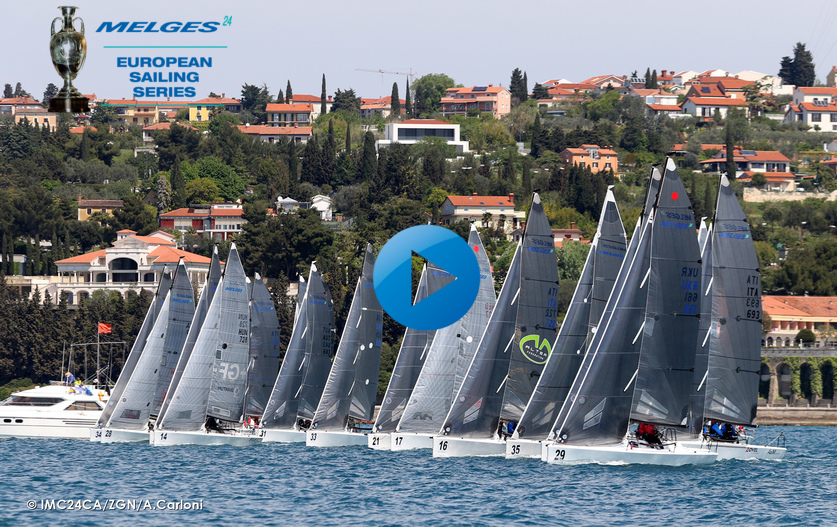 The second day of the regatta and four more races did not change the leaders. Andrea Racchelli helming Claudio Ceradini’s Altea (ITA722) scored 3-2-1-9 today and is keeping his overall leading position strongly with sixteen-point-gap ahead of the second. Miles Quinton’s Gill Race Team (GBR-694) with Geoff Carveth helming was steady enough (7-3-1-8 today) to stay on the top position of the Corinthian leader board with seventeen total points.

In the overall ranking Bo Boje Pedersen’s Upupup (DEN837) managed to jump from the fifth to the second position after Altea. Having a highly ranked match racer Joachim Aschenbrenner with his team mates onboard, they were winning race five and were second, sixth and twentieth in the other races, scoring the total of twenty six points. “It was a perfect and nice day,” said Bo Boje Pedersen happily after the racing. “It’s great to find us on the second position as our goal before the event was to achieve the position in the top 10 – our expectations have been less than we have achieved so far. Joachim with his 2 team mates makes a perfect teamwork and match racing experience is very useful not only on the Melges 24, but in every sailing discipline. I like Melges 24 class a lot and therefore I have returned to this after many years. About our future plans we are going to Riva event in May, definitely to the Worlds in Helsinki and we’ll end the season in Luino. But in the first place I’m looking forward to the final races here in Portoroz on Sunday.”

Three points behind is Akos Csolto’s Seven-Five-Nine (HUN759) who managed to keep his third placement, scoring 17-6-9 and the bullet from the final race today. Only one point behind is another Hungarian team, FGF Sailing Team (HUN728) with Robert Bakoczy helming, who’s performance was better and better with every race today scoring 6-3-2-2 and having the fourth position by the evening.

On the fifth place in overall ranking is the Corinthian leader, Miles Quinton’s Gill Race Team (GBR694), scoring seventeen points in total for the Corinthian ranking. In the Corinthian ranking three points behind is Dutch Team Kesbeke/SIKA/Gill (NED827) with Ronald Veraar helming climbing to this position from the yesterday’s fifth place. Also three points behind the Dutch team on the third placement is 2016 Corinthian World Champion, Marco Zammarchi’s Taki 4 (ITA778) with Niccolo Bertola in helm. Only one-point-gap separates 2016 Corinthian Worlds’ second, Tõnu Tõniste’s Lenny (EST790) from the third podium place making the competition very fascinating for the final racing day.

Also the International Jury had his hands full of job having five protest hearings from today and one continuing from yesterday. Jury decisions made some significant corrections to the rankings, especially regards to the Corinthian fleet.

Saturday evening ended with a wonderful gala dinner hosted by the Marina Portoroz and Yachting Club Portoroz, where some special prizes were given to the teams and both the daily video footage and pictures by Simona Bellobuono and Andrea Carloni – Zerogradinord were presented.

For the final day of the event the same weather situation like Saturday morning with a lack of wind in the morning has been predicted. Therefore there might be a postponement with an AP flag ashore before going to the water, but this is going to be the decision of the PRO Bojan Gale in the morning. But before going to the water the teams are invited to join the group photo, which has become a nice tradition of the Portoroz Melges 24 Regatta.

MELGES 24 MEDIA
Real-time racing updates from Portoroz will be coming across the IM24CA and YC Portoroz social media. Tune in for the latest racing information, results and updates online everyday at melges24.com/europeansailingseries. Each day, the IM24CA and Yachting Club Portoroz will be working hard to bring you mark-to-mark action and updates via video, photos and text. Zerogradinordrepresented by Simona Bellobuono and Andrea Carloni are pushing hard to deliver wonderful photos and footage to you daily. The latest actions will be accessible at the official IM24CA Facebook Page. Tell your friends and be sure to LIKE it to be updated.