June 26, 2016 – Kiel, Germany – Two races at the final day of the third event of the 2016 Melges 24 European Sailing Series in the Olympic Port of Kiel, Germany did not change the podium of Melges 24 fleet. Twenty two teams from seven nations experienced wonderful Kiel Week entertainment together with competitive racing during four days. The event ended with the same top three as coming into the final day. Double victory went to Italy – Andrea Pozzi’s Bombarda was victorious followed by Andrea Racchelli’s Altea as second, and the podium was completed by Miles Quinton’s Gill Race Team from Great Britain.

Starting the racing on Thursday the sailors experienced very different, and mostly tricky and difficult weather conditions, but the grand finale to the world’s biggest sailing regatta gave the huge crowds enough to cheer about in the warm sunshine and in stronger winds. Melges 24 fleet was lucky to get nine races out of eleven with one discard for the total points of the series.

In much better weather conditions on the final day Andrea Pozzi's Bombarda team with Stefano Ciampalini, Giulio Desiderato, Carlo Zermini and Nicholas Dal Ferro continued their consistent racing getting two bullets. The series of 2-3-1-1-(9)-1-5-1-1 and 15 points in total was impressive to secure the victory of the event.

Andrea Pozzi was very happy for winning the regatta in such a competitive fleet. “It was exciting to be in the same boat park with the Olympic classes and everything was organized very well. The weather conditions were not what they used to be in Kiel, but we were very lucky, especially on the last day scoring two first finishes in strong winds. We had a good week of racing and we are really proud about having a battle with Andrea Racchelli who is one of the best Melges 24 sailors in the world. I’m happy for our victory and very glad to see our team developing and improving. The next events for our team will be the fourth event of the Melges 24 European Sailing Series in Riva del Garda in few weeks, Melges 24 Europeans in Hyeres and then Melges 24 Worlds in Miami.”

2015 Melges 24 Worlds’ runner-up, Andrea Racchelli's Altea with Gaudenzio Bonini, Michele Gregoratto, Anne-Soizic Bertin, and Fabian Gielen finished both races of today as third and the series of 3-1-2-(8)-6-4-1-3-3, 23 points in total was enough for him to keep the second podium place in Kiel.

Podium was completed by Miles Quinton's Gill Race Team from Great Britain with Catherine Alton, Adam Brushett, Roger Gilbert and Craig Burlton continuing their consistent racing on the final day collecting 35 points in total out of the series 5-5-3-(10)-1-6-3-2-10. 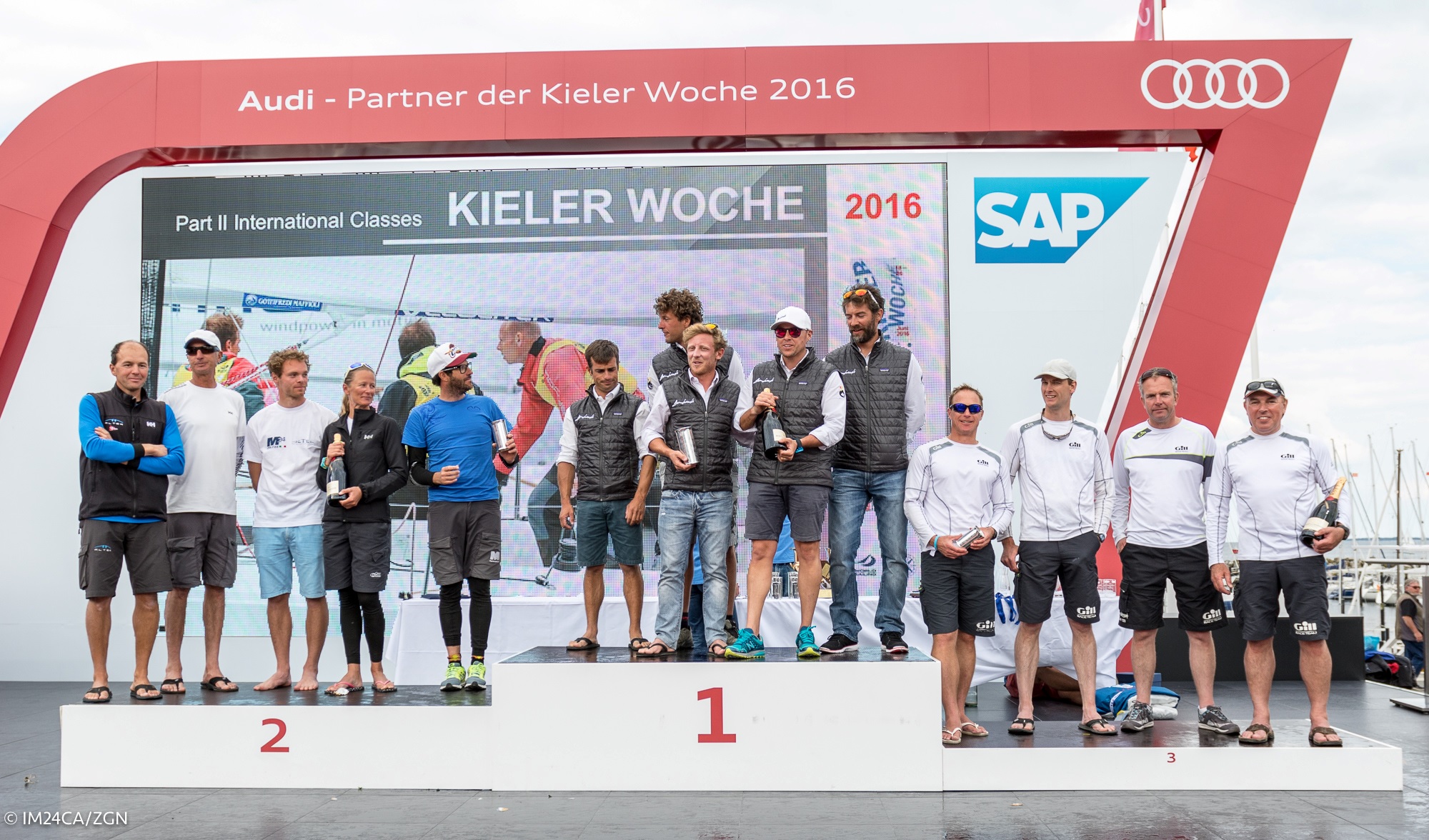 The rest of the Top six consisted of David Rowen’s Imagine from Great Britain as fourth, Michael Tarabochia’s White Room with Luis Tarabochia at the helm from Germany as fifth and Stefan Gründler’s IMMAC 24 as sixth, also from Germany.

The results for the Corinthian division as well the current rankings of the 2016 Melges 24 European Sailing Series will be published on June 29. 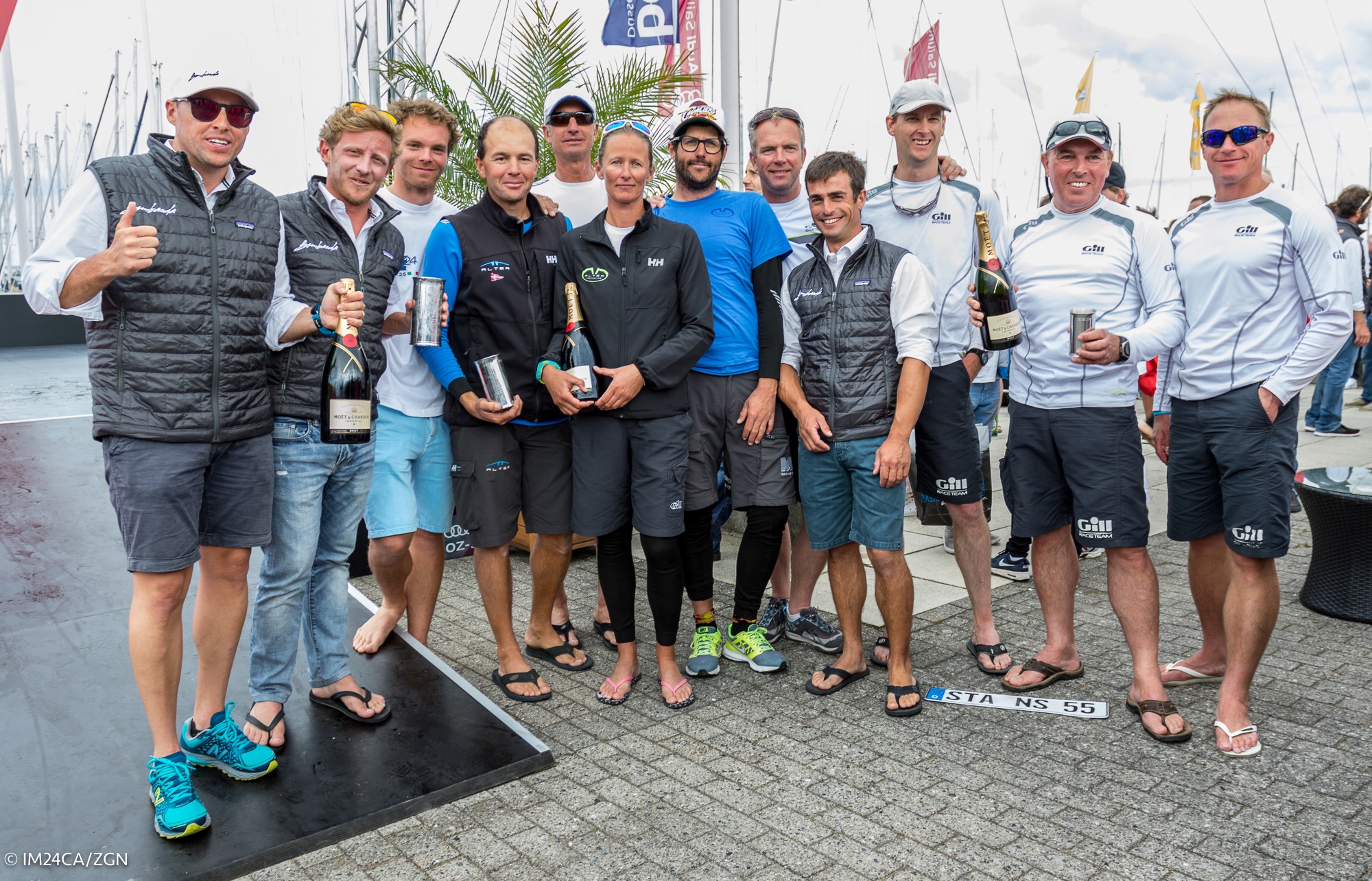 Photos of prizegiving in Kiel – © IM24CA/Zerogradinord