July 17, 2016 - Riva del Garda, Italy – The Garda does not betray and also on the last day of the Melges 24 European Sailing Series event in Riva del Garda got the perfect conditions, which allowed the completion of the eight races’ series, many of which held with some good Peler wind.

At the top of the fleet since the first day, Andrea Racchelli kept the situation under his control helming Altea (ITA; 2-3 today) to the top three in both today’s races, a pair of results useful to defend the first position from the attempts of Angelo Di Terlizzi’s Marrakech Express (ITA; 8-1 today), helmed by former Italian Olympian Matteo Ivaldi, and from the reigning World Champion EFG Bank (SUI; 1-8 today) with Chris Rast and Flavio Favini in the cockpit.

Thanks to this success, Altea confirms itself as a Melges 24 Italian Champion 2016 and will move some steps up in the overall ranking of the Melges 24 European Sailing Series that will be updated and published on July 20th.

“It was a great event, characterized by some particular weather conditions across the first day: we sailed well during all the weekend, keeping the attention high and we did not leave anything to the chance, due to the strong competitors that we faced on the water” - Andrea Racchelli said. “Now we have to turn the attention towards the Melges 24 European Championship, planned in a special venue like Hyeres, where we can expect some strong Mistral”. 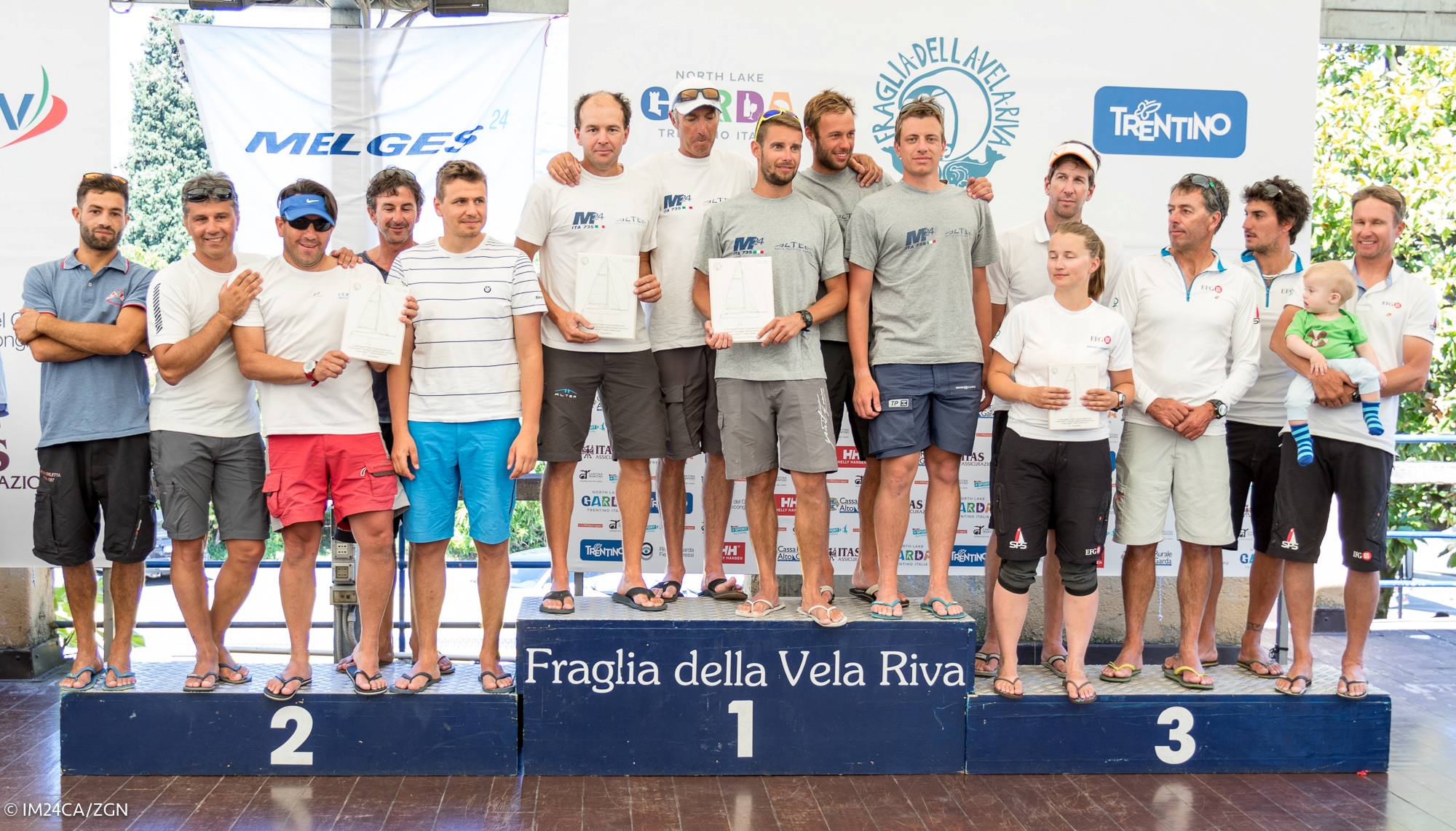 Among the Corinthians Miles Quinton’s Gill Race Team (GBR; 5-4 today) with Geoff Carveth helming defended one point leadership from Eelco Blok’s Team Kesbeke/SIKA/Gill (NED; 1-3) with Ronald Veraar helming, confirming itself as a likely leader of the overall ranking of the series. Third podium in the Corinthian division was completed by Peter Warrer’s Salty Dog (DEN; 2-5), winner of the first race of the series, held on Friday. 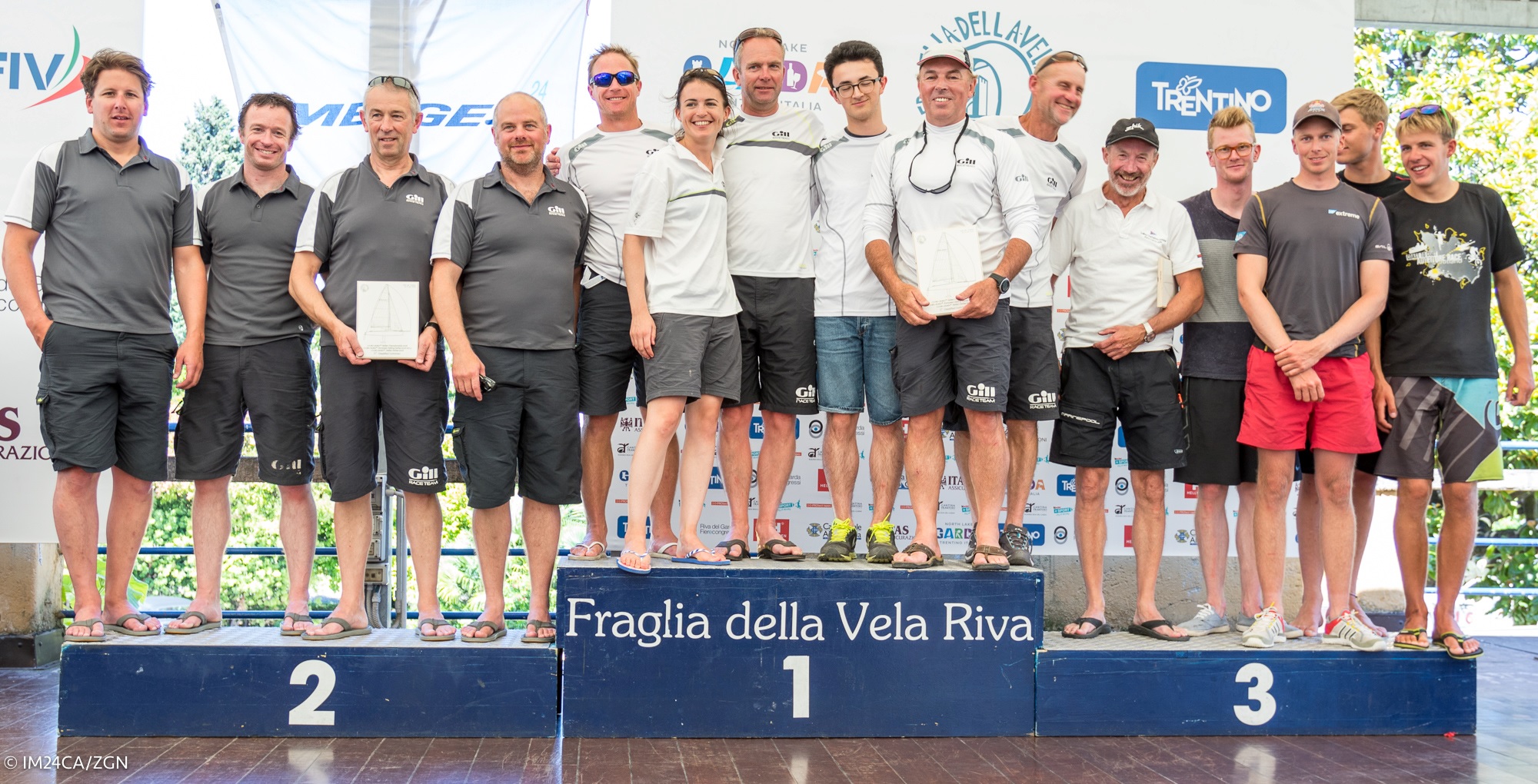 The event, organized by Fraglia Vela Riva along with the International Melges 24 Class Association, closed with the prizegiving, held in the main terrace of the organizing yacht club in the presence of a large crowd. Presenting the awards were the Fraglia Vela Riva Vice President Patrizio Caciagli, the President of the Jury Ezio Fonda and the President of the Race Committee Costanzo Villa. Miles Quinton, Vice President of the International Melges 24 Class Association was happy to share his emotions about such a great event here in Riva del Garda and encouraged the teams to sign-up for the Melges 24 Europeans in Hyeres and to come to the final stage of the European series in Luino, Lino Favini Cup hosted by Flavio Favini’s home club.

After the Garda Lake, the Melges 24 fleet will move towards Hyeres in France for the European Championship to be held on September 2-9, and then towards Luino, where the Melges 24 European Sailing Series will wrap up on October 7-9.