Cascade Locks, OR - This Friday, the 2015 CSR Marine Melges 24 U.S. National Championship hosted and supported by the Columbia Gorge Racing Association (CGRA) will commence with a beautiful thirty-six entries on the starting line. Teams have traveled from near and far. From Tampa, Florida to Lake Geneva, Wisconsin, from Corpus Christi, Texas to Canada, the fleet is diverse, super-charged and ready for an exciting weekend of Melges 24 racing.

The most highly anticipated aspect of the event is the potential for epic conditions that this venue is famous for. Driven by the temperature gradient between the desert to the East and the Pacific Coast to the West, the Gorge boasts premium high performance, one design racing conditions. As such, it becomes a 'wind tunnel' in the Cascade Mountains. During the Fall, cold air from the coast rushes to replace the hot air from the desert producing a seriously super fresh breeze - the larger the temperature difference, the stronger the breeze conditions.

The Melges 24 is responsible for the true birth of competitive one design sportboat racing, attracting some of the world's most sensational sailing personalities and talents. More than twenty-years after its introduction, the Melges 24 continues that tradition at the Gorge with the likes of Jeff Madrigali, Brian Hutchinson, Richard Clarke, Andy Burdick, Sam Rogers, Michael Buckley, Jeff Reynolds, George 'Bear' Peet, Ted Keller, Dan Kaseler, Scott Nixon and Jessica Koenig making roll call.

Of the thirty-six overall entries, twenty-six potentially will qualify for the all-amatuer Corinthian division. Melges Rocks Regatta Champ Frank Davenport on Rippin', George Haynie's Firewater, Kevin Clark's Smokin', Paul Krak Arntson on Nikita and locally-based Glenn Klute on Trophy Wife are among those that have qualified and are expected to do well. The Corinthian division promises a great deal of excitement. Many of these teams have never raced against each other, putting a whole new spin on the fun to be had at this regatta.

Today, teams enjoyed a very informative Melges 24 Speed Camp sponsored by Melges USA. This was a great opportunity for teams to ramp up their programs prior to the CSR Marine Nationals. Andy Burdick, Brian Hutchinson and Dan Kaseler coached teams, helping each one get their boats and crew dialed in perfectly. Camp closed with everyone having a great evening at Thunder Island Brewing Company with friends, food and plenty of live music.

Thursday marks the commencement of registration/check-in and weigh-in for teams. Practice racing is scheduled in the early afternoon, bringing hours of intense preparation to an end. Three days of the most thrilling and unforgettable Melges 24 racing takes place Friday thru Sunday.

"Our exclusive Bluesmiths Hydrophobic Ocean Shirts are a game-changer for performance sailors', says John Smalley, founder of Bluesmiths. "Our clothing and gear is perfect for weathering the challenging conditions at the Gorge. We are excited to be supporting this event. We wish all the competitors the very best of luck."

Real-time racing updates will be coming across the U.S. Melges 24 web and social wires during the 2015 CSR Marine Melges 24 U.S. National Championship. Tune in for the latest racing information, results and updates online everyday at usmelges24.com. Each day, the USMCA will be working hard to bring you mark-to-mark action and updates via video, photos and text. Play-by-play action will be accessible at the Official U.S. Melges 24 Facebook Page. Tell your friends and be sure to LIKE the USMCA on Facebook. 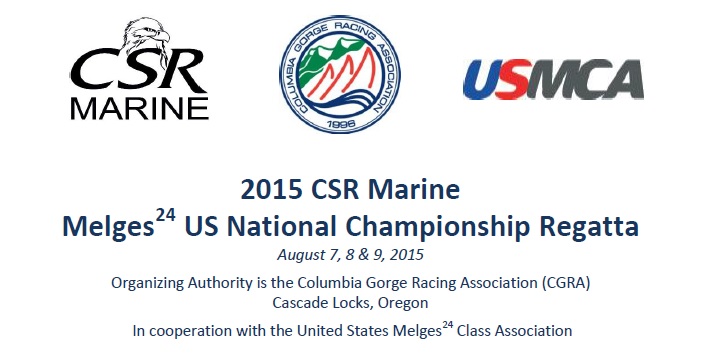