Story by Drew Mitchell, North Sails - Aidan Koster, 26, grew up in Victoria, British Columbia and started sailing out of Caddy Bay with his parents at a young age. By age 8, he was hooked thanks to summer sailing camps. By age 10 he was racing Opti’s. Fast forward to now, he is currently racing out of Royal Victoria Yacht Club and crewing on Sunnyvale, a local Melges 24, who finished 5th overall, 1st corinthian at the 2019 Melges 24 North Americans. He shares his sailing story with local North Sails expert Drew Mitchell.

How old were you when you really started fall in love with racing and what was it about the sport that intrigued you?

I got to go to my first away regatta in Comox in 2004. A couple friends and I loaded the Opti’s into the back of my dads truck, and he drove us up there for the weekend. The regatta was sponsored by Red Bull (like an 11 year old needs more energy), and I remember having a blast with my friends. This regatta was when I realized if I really pursued sailing it was not only an opportunity to travel, but to also do it with my friends.

You were pretty successful in dinghies at a youth age, what do you think helped you find success on the course at such a young age?

Not long after I joined the race team Karen Douglas became the Opti coach. She was very patient, and taught me lots of tips and tricks. It was under her guidance that I qualified to go to the Opti Europeans In Varkiza, Greece. Joining the race team around the same time as me were two friends, Reid Cannon, and David Berry. We were all roughly the same age/size/skill level, which created a healthy competition improving our skills and making racing enjoyable. As I graduated into Laser Radial, and eventually Laser Stephen McBride was the head coach and once again was very influential in turning me into the racer I am today.

Growing up in Victoria there is a lot of racing and good racers, who did/do you look up as mentor and why?

Robert “Bob” Britten has been a great mentor for me at RVicYC. From racing against him in Lasers, to more recently in Melges 24’s he has always been a great mind to bounce ideas off of, and exchange banter with. I learned at a fairly young age that if you are racing in and around Caddy Bay it is always a good idea to keep in mind which side of the course Bob is on. I admire his ability to engage with the youth of the club and stay in a Laser for so many (100?) years.

The sport looses a lot of good dingy sailors after they “age” out of junior sailing, what made the transition from dinghies to keel boats seem so effortless for you?

I have to credit Mike Turner for this. While I was racing Lasers on the Race Team with his son, Matt, he invited me on to his Elliot 770 for the local beer can racing. This was my introduction into the keelboat/sport boat racing scene, and I was hooked from there. As the local Melges 24 fleet grew it turned into a One Design fleet which peeked my interest. Before long I was racing on Psyclone, Light Scout, and Goes to 11 before starting the Sunnyvale program with the Wet Coast Sailing Team. The other turning point for me was answering a Facebook message to crew on “Shadow” a 1D35 out of West Vancouver for a Swiftsure race. This got my foot in the door for big boat distance racing. Through racing with them I met Drew Mitchell who I got along with like a house on fire. He has been responsible for many of the introductions that have enabled me to race in the keelboat scene.

What do you think was the biggest adjustment moving from dinghies to keelboat racing?

The biggest adjustment for me was moving from a single handed boat where I had control of everything, to a multiple person crew where I was just a piece of the puzzle. The game moved from managing the entire boat/fleet/conditions, to just focusing on the tasks that I needed to perform as a part of that team. Learning to depend on my teammates to collectively try and achieve a good result has been one of the biggest takeaways from moving into keelboat racing. Moving into bigger boats with multiple people made the social aspect of sailing much more fun.

In 2015, you and four other sailors under the age of 30 joined forces and started campaigning a Melges 24. Why did you guys choose the Melges 24.

Correct, In 2015 “Wet Cost Sailing Team’ was inaugurated. At the time Melges 24 was the strongest One Design keelboat fleet at Royal Victoria Yacht Club. It was announced that Victoria was going to host the 2018 World Championships so we decided to put a team together for it. Fraser McMillan, Keegan Moynihan, Kieran Horsburgh, and Harry Miller bought hull #151, and I joined them to make a bid for a good result at the 2018 Worlds. Since the 2018 worlds Alex “The Machine” Levkovskiy joined the team, and we purchased hull #415 with the goal of winning the 2020 Corinthian worlds. This event has now been cancelled, so we will have to wait and see what the future holds for us.

You guys had a pretty young team relative to the rest of the local and international Melges fleet. You seemed to have success right out of the gate, what would you contribute your early success too?

I would attribute the majority of our success to time spent on the water. As a lower budget team without pro sailors on board, we figured our best shot was to try to improve our boat handling to be one of the best in the world. In the three year lead up to the 2018 worlds the majority of my spare time outside of work was spent either on the water, or working on the boat. While watching the Match Race World Cup I heard an audio clip from Phil Robertson, “We can out hike these guys, they are OLD Men”. Having the youngest average age in the local fleet this became a common tag line on our boat, being younger and more agile is an advantage in handling the Melges 24.

In 2018 the Melges 24 world championship was held in Victoria, BC, your teams home waters. Your team hoped to win the corinthian title but came short of the goal. What did you learn from the event and what would be your advice to teams struggling in a big event?

What I learned from that event is that no matter how hard you train, or how much you plan for something, it isn’t always going to go your way. My advice is to enjoy the journey; looking back on that campaign, it didn’t have the intended result, but I have many fond memories of the build up to that event. On a personal level I met my lovely girlfriend who is also a sailor, at this event. So not all bad right?

When “The Machine” joined the team in 2018, we were roughly 180 lbs. under the class weight limit. All 4 of us went from a “loose weight” lifestyle to a “gain weight” lifestyle. By the next summer’s events we had collectively gained around 90 lbs. to to offset our weight deficit. As we learned our new roles sailing the boat with 4 we made several adjustments. Keegan had moved from the also bow position to trimming, as Alex took over the bow. In order to create more righting moment I, being the heavyweight, moved forward one position to place myself closer to the widest part of the boat, and middle of the hiking strap. We learned little tricks to sailing light with 4 such as tensioning the rig to de-power a little earlier than before. Some bonuses we found to sailing with 4 was amount of room in the cockpit for maneuvers, and the increase in downwind speed and angle.

Again this team of 4 seemed to be fast if not faster. You guys did well at North Americans in the Gorge and then again at US Nationals in Michigan walking away with the corinthian title in both. I noticed you guys switched from UK sails to North Sails, why the switch ?

The Gorge One-Design regatta was our first real test since the worlds to see if our adjustments had paid off. We were pleased to note that though our upwind speed wasn’t anything special in the big breeze we were able to hang with the “Big Boys”. On the downwind we used a P-2 spinnaker for most of the event, combined with our light crew weight made for some fast rides. This gave us a lot of confidence going into the North Americans in Michigan. North Americans was for the most part a light-medium air event (Other than 1 race on the last day) which made our light crew weight an advantage. Switching to North sails was very beneficial in allowing us to tune with our competitors. Racing with a North inventory gave us the ability to be competitive in a wide wind range with the top of the fleet.

What are the challenges and on the flip side the benefits of being a Corinthian team in a heavily dominated pro class?

I welcome the challenge of competing against the pro sailors/boats in the class. In my opinion there is no better way of learning how to become a better sailor than being in and amongst the best. Being able to talk to the pro sailors before and after racing is a great way to dramatically improve the learning curve. Having both divisions race together makes for good racing, and when you do well, makes the victory that much sweeter.

You have also done quite of bit of distance racing around the PNW. What would you consider your favourite race and why ?

My favourite distance race in PNW is the Van Isle 360. I consider it “adult summer camp”, It is hard to think of a better way to spend two weeks in the summer than doing 9 distance-sprint legs around Vancouver Island. On top of the great racing and beautiful scenery you spend countless evenings with all the other crews, in remote locations all over the island. I have made many connections, and even more great memories on the two times that I have done this race aboard “Zulu”.

Last question, what advice would you give a young corinthian team looking to put together a team to race internationally?

My advice to a young team would be to find a group of like-minded people that want to achieve the same goals as you. If everyone is on the same page and buys in, the possibilities of what you could achieve are endless. Be ready to put the time in to train hard, and enjoy the ride!

Sunnyvale CAN151 of Fraser McMillan 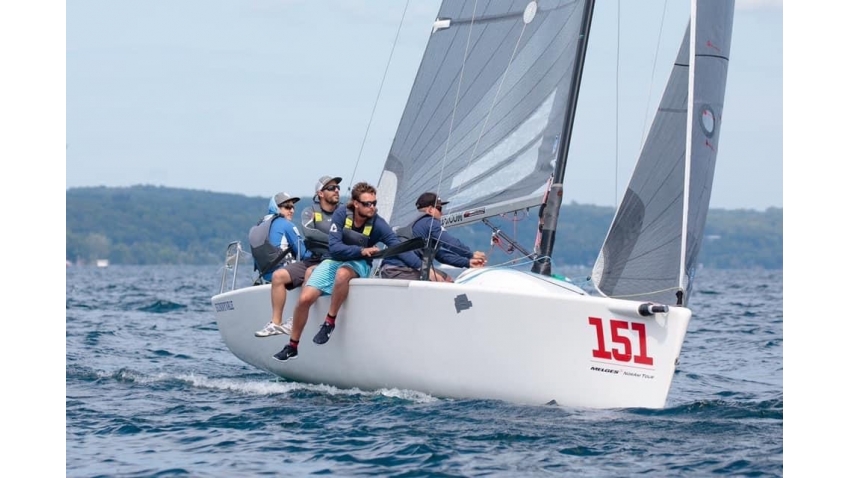 Sunnyvale CAN151 of Fraser McMillan 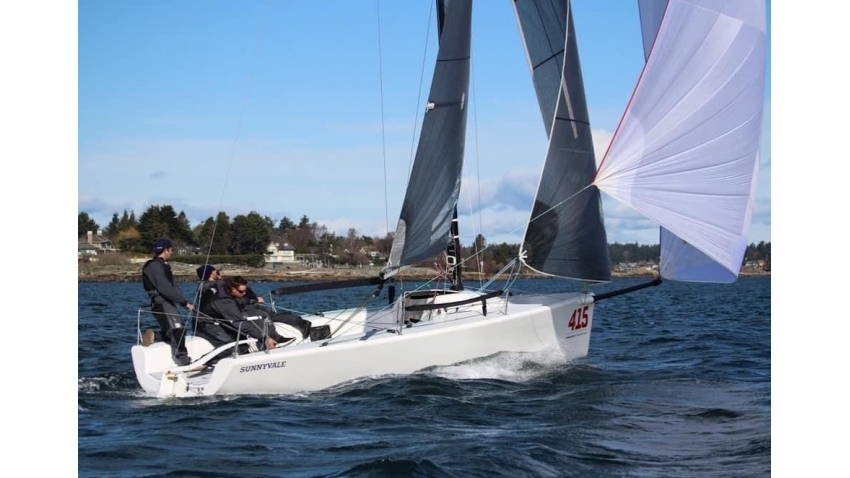 Sunnyvale CAN415 of Fraser McMillan 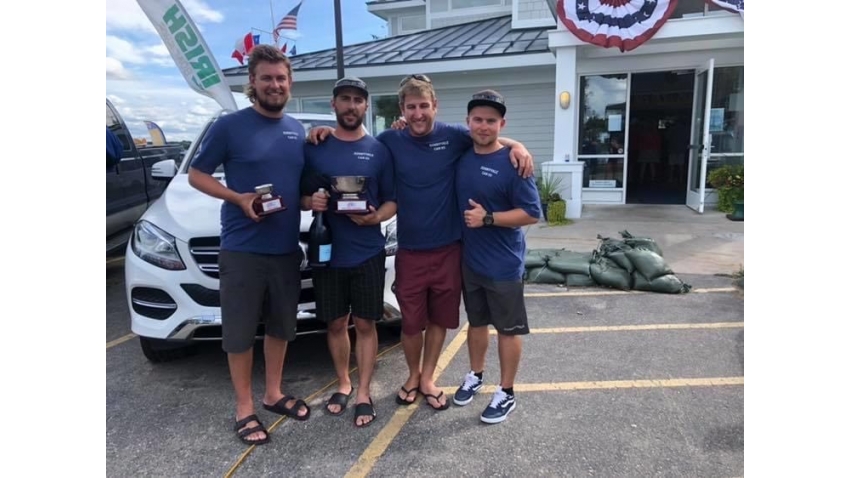