April 12, 2021 - Charleston, SC, USA - It turns out you can safely and successfully conduct a grand prix sailboat racing regatta amidst a pandemic.

While major regattas around the world are still getting canceled because of coronavirus, Charleston Race Week elected to press forward with its 25th anniversary celebration. It came one year late since the 2020 edition was canceled due to the developing pandemic last April.

Mass vaccinations combined with a decrease in positive cases throughout most of the United States prompted longtime event director Randy Draftz to forge forward with a Charleston Race Week 2021.

Regatta management did so with an abundance of caution and numerous precautions were put into place to ensure the event was held in a safe and responsible manner. All participating sailors were encouraged to get tested before attending the regatta and that provision did lead to some positive tests that caused a few boats to pull out.

Even though Charleston Race Week has a well-earned reputation as a party regatta, organizers made the tough but wise decision to cancel all social activities. For this year, the focus on April 9-11 was fully on producing top-notch racing, and on that front the regatta was a tremendous success.

Travis Weisleder is a 1997 graduate of College of Charleston and was a member of the intercollegiate dinghy team while there. He considers Charleston his home racing area and has only missed this regatta five times in the past 25 years.

Weisleder and his talented team on Lucky Dog led wire-to-wire in winning Melges 24 class, largest of the regatta with 33 boats. Veteran professional Mark Mendelblatt was aboard as tactician, while John Bowden trimmed the headsails and Collin Leon handled the bow.

“Charleston Race Week is always one of the biggest events of the year for the Class, and all the best U.S. boats were here this week. It was definitely a stacked fleet,” Weisleder said. “I’ve had the same core group together for the last five years and we’ve spent a lot of time over the last few years getting our boat speed dialed in.”

This was the fourth time Weisleder has topped Melges 24 class at Charleston Race Week. He praised the strategical work of Mendelblatt, who was conservative with his calls and made sure Lucky Dog reached the first windward mark in the top five.

“We were really fast upwind. That enables you to get out of bad spots pretty quickly,” said Weisleder, a Richmond, Virginia resident who does marketing for car dealerships. “It all came together this week.”

The Corinthian division in the Melges 24s is always heated, and 2021 was no different. Surprisingly, the top-slot went to Kevin Shockey and his twin brother John on Wombmates Racing. With crew members Mike Komar, Alex Tracy and Timothy Zacher, they finished the regatta an impressive ninth overall.

William Morang at the helm of Michael Lenkeit’s Rapscallion finished second Corinthian, followed by Paul Bergendahl’s Committed in third. Steve Pirie’s RUMbunctious and Megan Ratliff’s Decorum rounded out the top five respectively, fourth and fifth. A total of 14 out of 33 participating teams qualified for the popular all-amateur division. 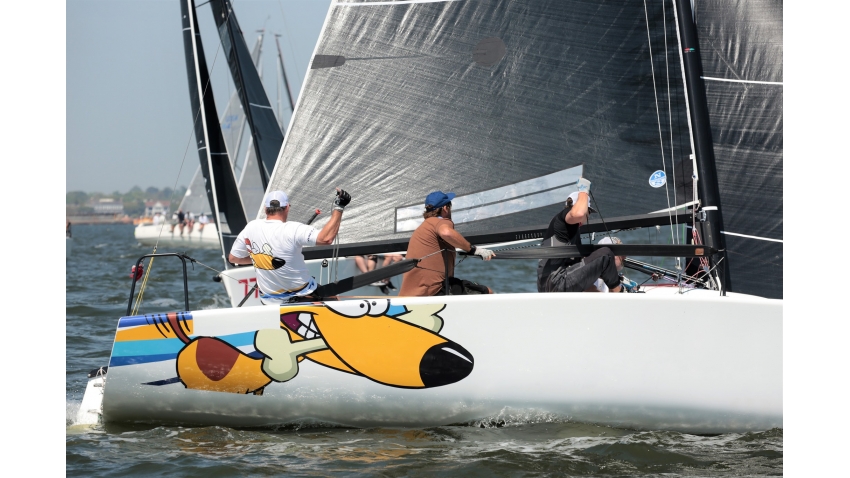