August 7-9, 2015 -  Cascade Locks, Oregon, U.S. -  The largest one-design keelboat regatta on record for the Columbia Gorge Racing Association, (CGRA) out of Cascade Locks, Oregon was last week’s the CSR MELGES24 US National Championships. Boats traveled from over 3000 miles (4800 kilometers)  away to experience The Gorge.  They were treated to what many consider one of the most memorable and exhilarating sailing events of their lives. 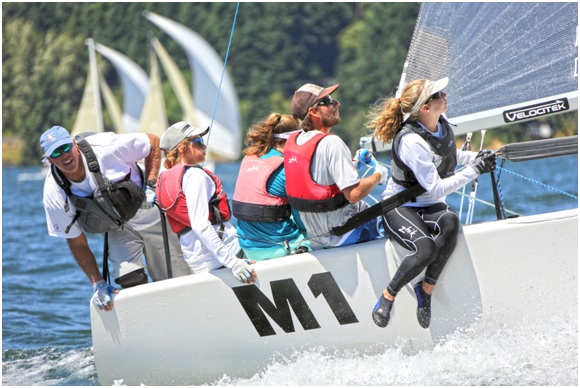 David Collignon’s “M1” Steered by “the next Santa Cruz Phenom”, 17-year old Ian Collignon with a crew David Collignon (62), Josselyn Perutti (16), Mike Scott (24) and Olivia Beers (16). They are planning the road trip to Miami for a strong showing at the 2016 Worlds.
Photo by Jan’s Photography   janpix@comcast.net>

This has been an interesting week for hundreds of MELGES24 sailors after having spent the previous 5-10 days blazing up and down the Columbia River at Cascade Locks, Oregon.  Such an overwhelmingly pleasurable experience tends to sidetrack otherwise productive people in their first week back to the “real world”. This is a good thing, however. Co-workers are finding MELGES24 sailors with permanent smiles as they address new projects at work. “Work challenges have become opportunities. Stress wrinkles have been replaced with the smiles (This is the result of the Gorge “Cool-Aide” which is the 15-35 knot warm wind, barefoot and bathing suit conditions that sailors live for. Behind most of those smiles are thoughts of getting back onto the MELGES24 and The Gorge for more fun.) 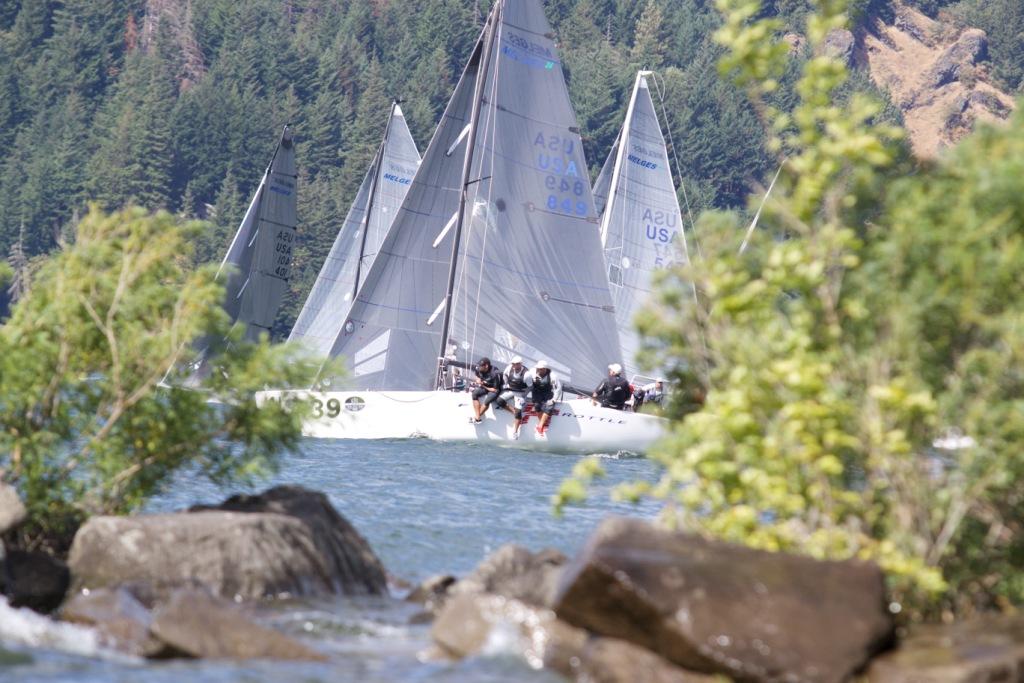 Met with great enthusiasm, the idea of holding the MELGES24 US Nationals and MELGSE24 SPEED CAMP at The Gorge, is now considered the perfect answer and the model for future events. New US MELGES24 class president, Steve Boho, says that we need more of these. 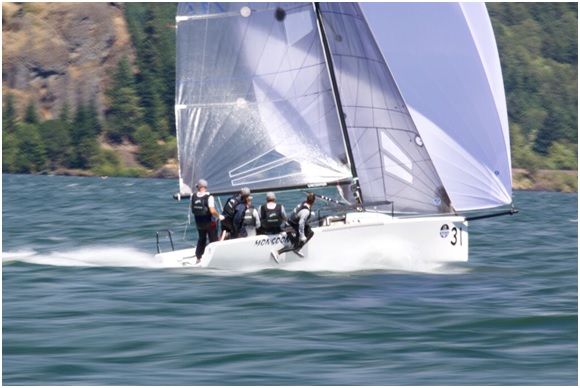 Speaking of faster boats, Velocitek offered new instruments to the winners of the MELGES24 Speed Challenge on what many consider a perfect racetrack.The buzz around the fleet had been over Kevin Welch’s MIKEY which hadrecorded 24.4 knots in a 35- knot gust at the Pre-Nationals on the previous weekend.  In that same weekend Steve Boho, new USMCA class president, got THE 300 to hit 23.7 knots and Canada’s Duncan Stamper, IM24CA Ex Comm member, clocked 22. 1 knots on hull #011, “GOES TO ELEVEN”. But, bythe end of the National Championships these teams had to bow to class veteran and former US national champion, Bruce Ayres on MONSOON, who snatched the prize with a sensational 25.8 knots, against a 1.5-knot Columbia River current! 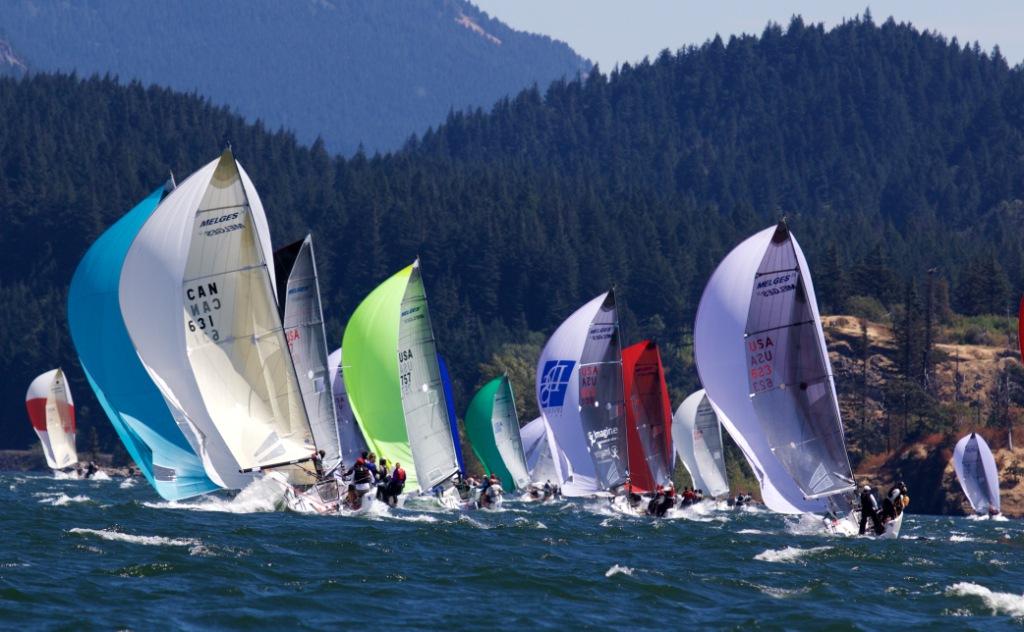 Did we mention the energy level of the sailors? It was high-energy and all positive. Before every start teams would exchange smiles over the sensational experience they were having.  As they blazed up the beats and screamed down the runs teams would wave others by at close crossings and then wave again just to be friendly. The mood was too great to worry about close calls and bother with other minor stuff.  This event was all about the fun. 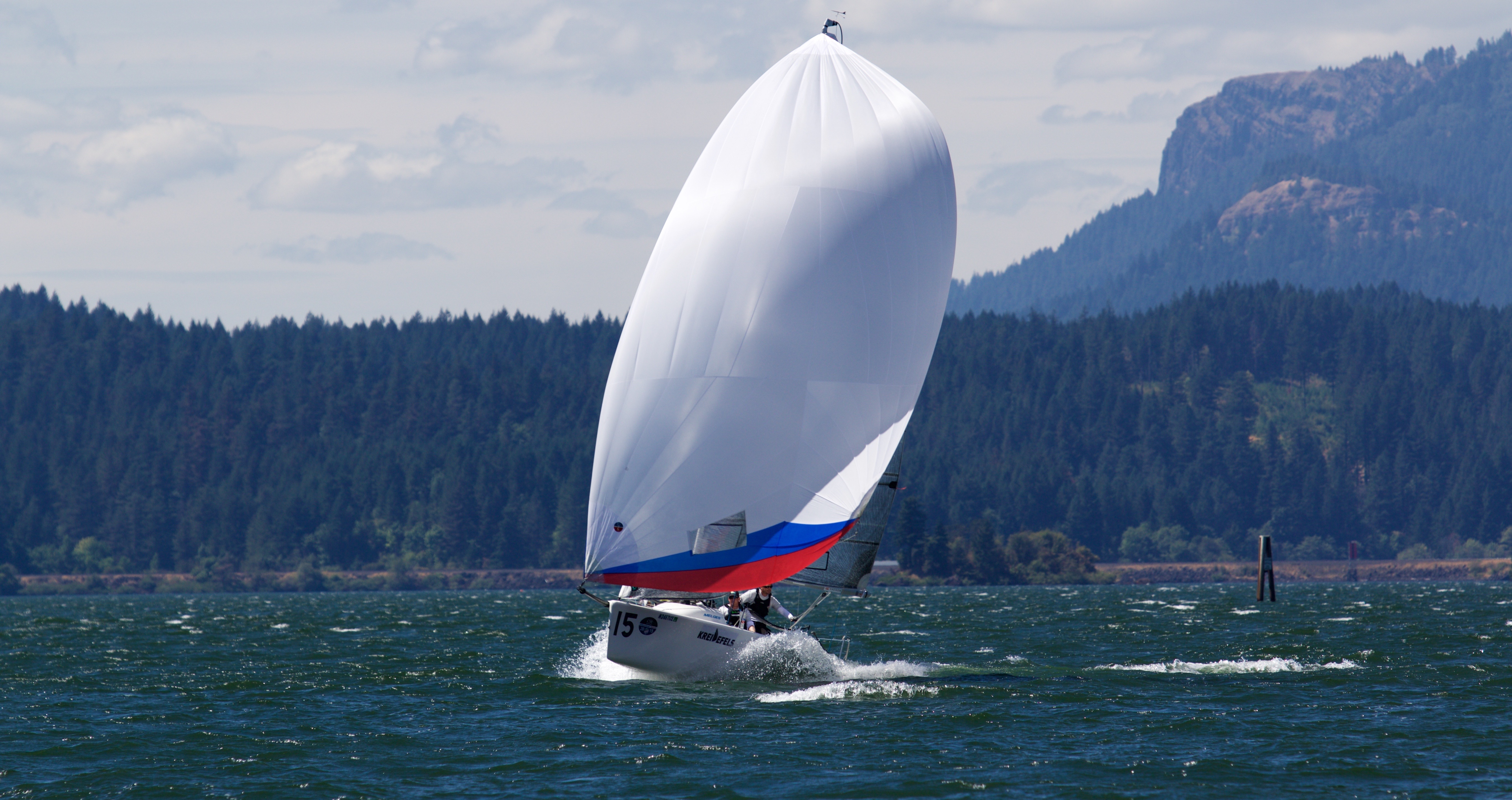 Chris Kalinski’s Zoo Taking flight. Chris’ crew traveled from Annapolis and Toronto to fly on the Gorge. He’s planning to return next year for more.
Photo by Petey Crawford  peter@penaltyboxproductions.com

It was a big family party on the water. There were teenage drivers racing against 75-year olds. There were young family teams, woman-driven teams, college teams, Olympic medalists, America’s Cup sailors, and Rolex Yachtsmen of the Year, club racers and new owners all mixing it up and having the time of their lives.

We had a chance to catch up with Matt McGregor, skipper of Seattle-based “GOOD ENOUGH” , who won the Corinthian division and challenged the overall podium with sixth overall - “We all love sailing in The Gorge for same reasons everyone does – predictably breezy, warm (too hot lately), warm fresh water, awesome venue and good people and activities shoreside and in Hood River.  I think the event opened the eyes of other local boats, CANADA included, and boats from across North America that it is breezy but controllable (with a Melges24) and fun for sailors at all levels of the game.  We floundered around plenty, but still tried to compete and hang in there.  We have a limited budget, limited vacation time, and we are total amateurs yet, we make it worthwhile to do these events.  We enjoy sailing together. Others may have questioned our 5 person program, but it seems to work for us and we put a good group together (3 men, 2 women) before rock stars - we know where we are and would rather enjoy the entire weekend rather than just try to place better.  We love CA events and the NW scene can get a lot of M24’s on the line when we rally all the local owners.  We love the boats.

As for future, we would like to do more national events. Our goal is 4 big events a year at cool venues and we likely won’t do anything far away until 2016 when we plan to end up at Miami Worlds.  It is at opposite end of Country for us but would be fun.”

The future looks bright for the MELGES24 fleet. After a week of sailing in 25-35 knot wind and experiencing the boat’s great stability at boatspeeds in the mid-20’s this MELGES24 fleet is poised to take on anything.  Next year’s Lake Garda blow-out (the “other Gorge”) and the always windy European Championships in Hyeres, France are on the radar for US boats along with the 2016 MELGES24 Miami Worlds.

After the racing was over the teams headed to the launch ramps where they showed off another MELGES24 attribute. No boat took more than 150 seconds to pull their boat out on the ramp. In fact, at the Stevenson ramp the first 5 boats were pulled in 9.5 minutes.