Travis Weisleder’s USA-848 Lucky Dog/Gill Race Team was actually one point ahead of Bruce Ayres’ USA-851 Monsoon going into the final race of Sperry Charleston Race Week (CRW)… “This is what you want - a ‘Who Beats Who’ going into the last race of a sensational regatta series” says Lucky Dog tactician, Scott Nixon of Quantum Sails.

Of course, it was a full-on match-race, and since Lucky Dog had a bigger throw-out (14th), Monsoon was happy to push Lucky Dog over early even if they, too, were drawn over. Their only job was to get the Lucky Dog to eat a 14th place finish or worse.

Monsoon managed to get back to the line earlier than Lucky Dog and emerge in control. From there they camped onLucky Dog for the first three legs in a freshening 22 knot breeze. With their final opportunity to break free at the last weather mark, Lucky Dog managed to pull a jibe-set into a big puff.

“We launched ahead on that move and were ready to jibe back and take it to ‘em, but…. We actually spun-out on the critical big jibe in the puff! Ha-ha. After we got back on our feet and regrouped, we couldn’t quite cross. Kudos to Monsoon and the entire fleet for a great regatta and World Winter Series!” – Scott Nixon.

First place in the Corinthian Division of the BLUESMITHS World Winter Series went to Megan Ratliff’s Decorum with brother Hunter Ratliff at the helm and Chris Stocke, Alex Simon and Brad Terpstra, all from Chicago. After just two seasons of sailing the Melges 24 together, Ratliff’s close-knit team from Chicago has risen to the top echelon of this most exhilarating class to place 5th overall at CRW and claim the Corinthian title in the Bluesmiths Melges 24 World Winter Series. 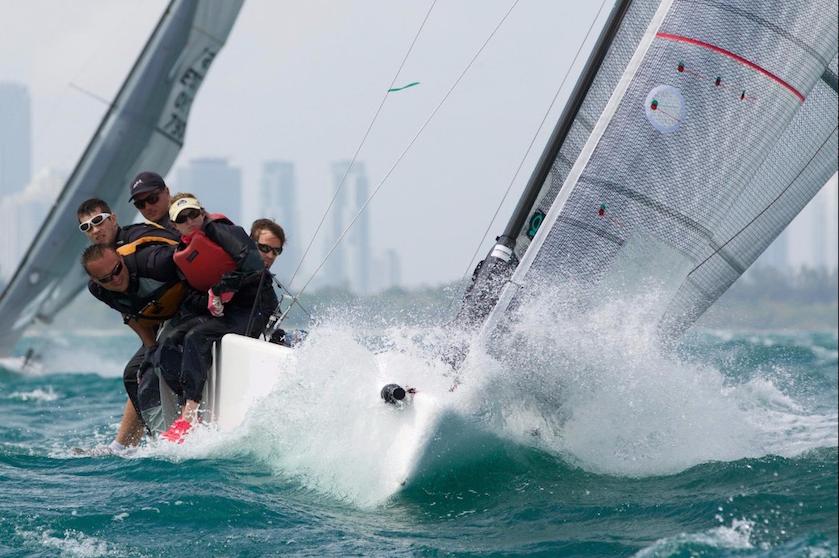 Megan Ratliff on the Melges 24 – “Hunter and I were looking for a boat we could sail together and that was easily trailer-able. We narrowed it down between the 24 and the J70. We decided we wanted the power, speed, and fun that the 24 had to offer. The Worlds being in North America in 2016 was also a selling point for us–not to mention the depth of talent in the fleet!

“Many thanks to Bluesmiths for the support of the 2015-16 Melges 24 World Winter Series. The NanoFiber shreds so hard, and is perfect on the water!” – Hunter Ratliff, Decorum skipper.

Through the technology of SAP’s Trac-Trac system spectators were able follow the races with real-time tracking technology. Second place finisher Lucky Dog posted what SAP’s Trac-Trac revealed was a spectacular final race on Saturday. After a solid start the track showed how Lucky Dog stayed in the pressure and picked every favorable shift to cut over 300 meters off the path of their nearest competition, with an average speed of 4 knots above the next boat. 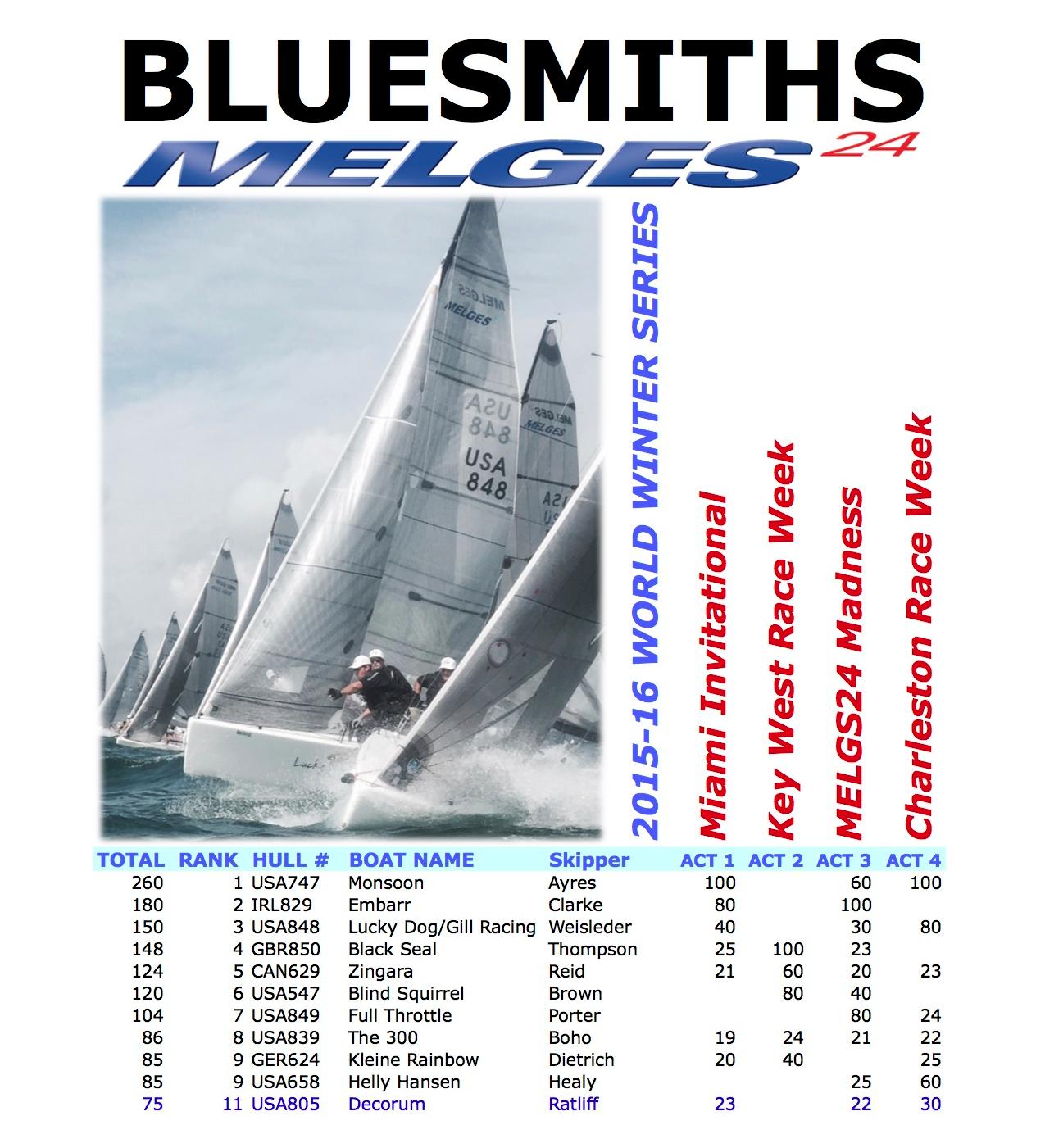 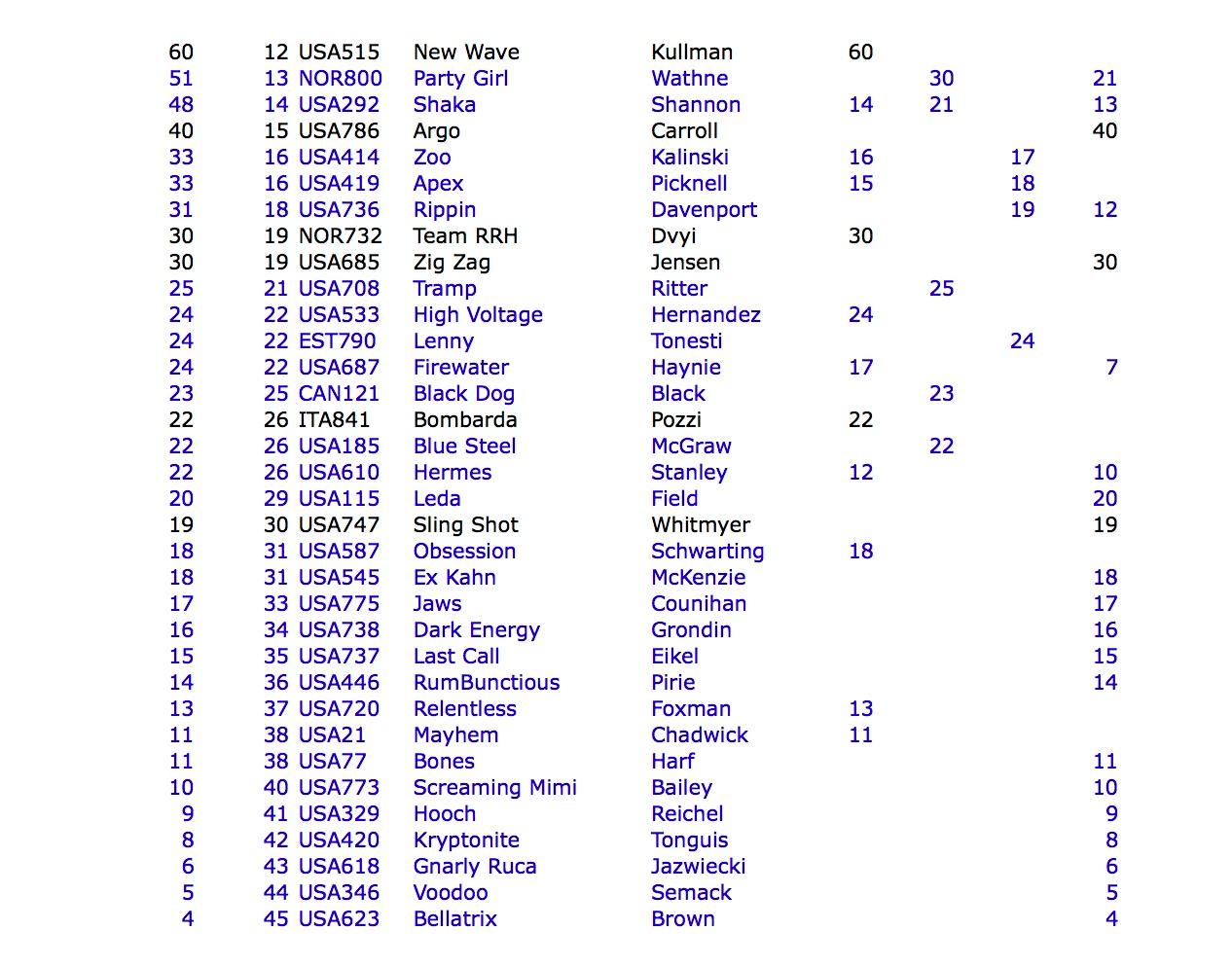