February 13, 2020 - St. Petersburg, FL, USA - By Dave Reed / Sailing World - The Melges 24 class has been through boom and bust, but it’s booming again. Look no further than the deep Corinthian fleet at the Helly Hansen NOOD Regatta in St. Petersburg.

Way back in 1999—months before the world was supposed to go haywire—a guy named Bill Rogner—that’s Bill, of Capt.’s Bill’s Barber Shop, in Punta Gorda, Florida­—was having the time of his life at the back of his new Melges 24. After three days of excruciatingly fickle winds, Rogner and the crew onboard Hurricane were a happy bunch as they packed up their boat at St. Petersburg YC’s Sailing Center. They were the top boat of only 10 of that year’s NOOD Regatta. It was a small fleet, yes, but it was the first time Melges 24s had lined up in St. Pete.

The class has had its peaks and valleys, as well as its challenges and evolutions as all-pro rock star teams came and went. Perhaps too grand-prix for its own britches, a steady decline in participation was inevitable. But over the past few years, with healthy grass roots resurgence, Melges 24 sailing is cool again.

Well, actually, it’s always been cool, but now it’s more affordable and more attractive to amateur teams. There’s no denying the Melges 24 is fast, fun, and athletic sailing, and if such a title existed, it would be the Sportboat of the Century. “It’s one of the nicest boats I’ve ever sailed,” says Peter Duncan, 2017 Rolex Yachtsman of the Year. “It’s a terrific class, with really nice people, and it’s really competitive.”

When it comes to one-design sailing, that’s the complete package.

Duncan is a regular A-lister in both Etchells and J/70 circles. He’s an incredibly well-rounded sailor—with a full-time job in Manhattan—who enjoyed a brief stint in the Melges 24 class a few years ago. He was eighth overall at the 2016 world championships in Miami before jumping on the J/70 train and winning a windy 161-boat worlds in Italy the following year. Duncan says he’s been too busy with his commercial real estate interests to do much sailing of late, but opportunity came knocking with the Melges 24 Worlds, in Charleston, South Carolina, in May.

With USA 829, the Helly Hansen NOOD in St. Petersburg is essentially Duncan’s campaign kickoff. As of late January he hadn’t spent any time personally fussing with the boat and admits his program is a bit more behind the ball than usual. But he says with a chuckle, “I understand it’s a nice boat. It’s in pretty good shape, and we’ll work on it some when we get together.”

Helping Duncan whip the boat into shape and up to speed are Matteo Ramian and Carlos Robles, Victor Diaz de Leon and Willem Van Waay. Diaz de Leon and Van Waay, himself a recent Rolex short-lister, won the J/70 worlds with Duncan. There should be zero doubt they’ll get up to speed quickly in the new-to-them boat, but Duncan says he’s going into St. Petersburg, a venue also new to him, with realistic expectations. “There are a lot talented sailors in this class,” he says. “I’m just really looking forward to sailing with everybody.”

Laura Grondin, of Norton, Connecticut, is also new to the scene and happens to own the freshest fruit out of Zenda, Wisconsin. Apparently, someone backed out of a build slot, so she and her husband jumped on it. Their local fleet on Fisher’s Island Sound, which is MudRatz territory, is growing one 24 at a time. They’re now up to nine boats.

Flareups are happening elsewhere across the country, too. “We’ve had a huge surge in members,” Grondin says, attributing recent growth to the class’s development of a better-connected North American series. As the class’s first female international chair, she’s keeping tabs and likes what she sees. “They [the class] spread the events across the U.S., so now you can work your way toward a title. There is a core group of pro and Corinthian teams that are regular to a lot of these events, but now there are more traveling boats showing up. It’s a great boat, there’s no denying that.”

“Everyone always thought it was too technical or whatever, but that’s not true,” Bowman says. “We’re putting people from other classes in our boat and they fall in love with it immediately. It’s a fun boat, technical and quite frankly anything else is boring.”

With the Worlds in charming Charleston, demand is high from keen owners the likes of Peter Duncan. They’re hunting for newer, stiffer boats. Options on the class’s classifieds page in late January were asking anywhere between $10,000 to $30,000, but better deals and more inventory will likely be available post Worlds.

At least, that’s what Kansas City sparkplug Tim Bowman is banking on. When it comes to Melges 24 sailing, he’s as fired up as you get. His story will sound familiar: First the triplets, then the new business. Then, not enough time for J/22 racing on Missouri’s Stockton Lake. He’s a grandpa now—a young one though—with two thriving businesses. He’d long wanted a Melges 24, so he bought one from a guy in New Jersey and—get this—put out a crew call on a local Craigslist board.

The original cast of Bowman’s Rhumb Runner got a PHRF certificate and hauled the boat to Kansas City for what they thought would be a fun, laid-back weekend. It turned out, he says, to be “a full-blown regatta.”

They “damn near took dead last,” but three weeks later, with some practice, they showed up to their next regatta and won the thing “outright,” racing against the very same boats.

His experience in the Melges 24 has been nothing but wonderful, he says. Like Duncan and so many others, he loves the class and the competition. “I’m not sure if it’s unique to the Melges 24 class, but the top competitors are so helpful. We’re much higher on the learning curve now. We’re getting our butts kicked, but we’re having fun.”

So much fun that Bowman and few others are sniffing out deals for a second boat. They want one to stay local to Missouri and Kansas, to grow the home fleet, and one to travel with, to get the experience and bring it back, full circle.

“Everyone always thought it was too technical or whatever, but that’s not true,” Bowman says. “We’re putting people from other classes in our boat and they fall in love with it immediately. It’s a fun boat, technical and quite frankly anything else is boring.”

Before Bowman and the Rhumb Runner crew get to the Helly Hansen NOOD Regatta St. Petersburg, they’ll have bathed themselves in the breezy luxury of Miami’s Biscayne Bay and gone immersive in a NorthU Tactics weekend in Dallas, Texas. “By racing in these bigger regattas our learning curve is very aggressive,” says Bowman. “Now that I’m able to concentrate on my sailing program, I’m loving it.”

Like Duncan, and many others in St. Petersburg for the NOOD, it’s on to Worlds, one glorious Melges 24 sailing day at a time. 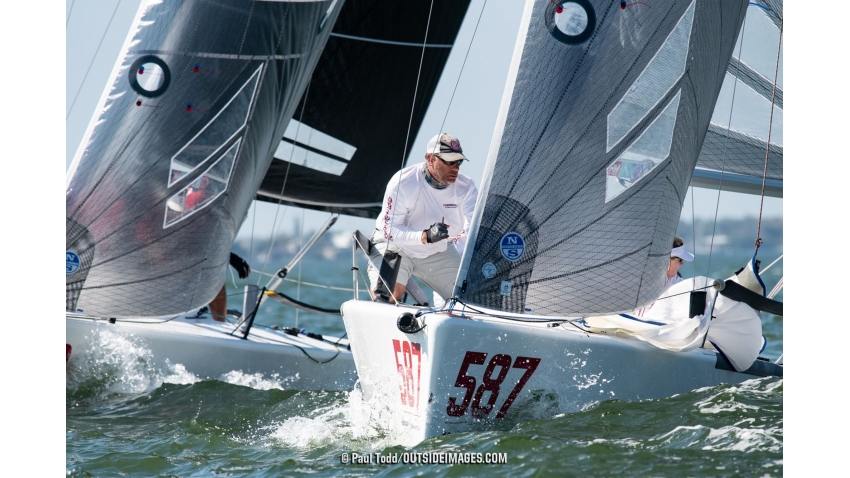