Gullisara claims the 2012 Melges 24 World Championship: one of the most coveted and prestigious titles in the sailing world was decided on the finish line of the final race when Carlo Fracassoli and his team had to wait an agonising four minutes for their nearest rival, Alberto Bolzan's Saetta, to cross the finish line before they could be certain of victory.

Going into the final race the adrenalin levels were through the roof as these two incredibly strong Italian teams went head to head in one of the greatest challenges in international sailing. Gullisara, the reigning European Champion owned by Giuseppe Comerio, fielded excellent sailors, but also great friends. With local expert Carlo Fracassoli at the helm, Chicco Fonda as tactician, Tano Felci on the sheets, Giovanni Ferrari at the halyards and Carlo Zermini on the bow. They are the heroes of the day, which began very early in a light and trick northerly Peler breeze.

Last night, after nine races, it was Gianni Catalogna's Saetta, with helm Alberto Bolzan and tactician Nathan Wilmot, who lay ten points ahead of Gullisara.  In the early morning light this incredibly strong fleet ran down to the start line for the first of two races that provided some of the most exciting and emotional scenes we have seen at a Melges 24 Worlds.

The first race of the day turned into a match race between Saetta and Gullisara with Seatta taking victory by a photo finish, giving them an eleven point advantage: not enough to guarantee victory but none the less sufficient to give the feeling that the winner was looking reasonable certain.

We should have learned by now that nothing is ever completely certain and, although the Race Committee had hoped to run to races in the morning, the Peler had other ideas and the crews were forced to return to the docks after race ten to await the arrival of the Ora.

At 12.45 the fleet took to the water again. Initially the wind looked good but as the Race Committee attempted to start it went fickle and after a general recall they were forced to go to AP on the second attempt.  Fortunately after a few minutes the Ora came good and the fleet was under starters orders again. Gullisara started really well and Saetta tried to cover but failed. They tacked off but fouled another boat and were forced to take a penalty. Gullisara, meanwhile, flew to victory in both the eleventh race and in the Worlds too. Saetta tried everything, exhausting every trick in their very extensive repertoire, but there was nothing they could do. Saetta crossed the line in 21st: the worst result of the series. For Alberto Bolzan, Nathan Wilmot, Michele Giovannini, Stefano and Simone Ciampalini Spangaro however, came the consolation of a well-deserved silver medal and the acknowledgement from their fellow sailors that they had faced an incredible battle and shown huge courage and skill.

"I am very happy!" - said Carlo Fracassoli drunk with happiness and the delicious TrentoDoc sparkling wine reserved for the winner - "Victory at the European Championship was a nice confirmation of our hard work and this is definitely a major victory for the development done by the team of Quantum sails. And confirmation for our team that, as always, did a great job: even in the final stages we believed in ourselves, and all together work very hard to deserve this win."

The third spot on the podium went to Audi Ultra supported by Eberhard & Co. Riccardo Simoneschi and Gabriele Benussi, together with Vittorio Rosso, Federico Buscaglia and Lucia Giorgetti were great competitors in a Worlds that has rewarded unwavering concentration and true skill in one of sailing's most challenging venues.

So, an all-Italian podium for a record breaking championship record that brought together almost 130 boats, representing twenty-two countries and four continents.

Just one step away from the podium, Blu Moon, with the pairing of Favini-Ivaldi, once again put in a performance of incredible consistency. Matteo Balestrero' Giogi with Nico Celon calling tactics, took sixth, their only regret being their first day disqualification which somewhat took the edge of their two first places early in the event.

To find the first non-Italian entry - Blu Moon is Swiss, but with an Italian heart - you have to scroll down the list to sixth position, which is occupied by Switzerland's Christopher Rast aboard EFG Bank, who were followed by the Japanese team of Mamma Aiuto! led by Kan Jamada.

In the Corinthian Division, Norway's Oyvind Jahre and the Storm Capital Sail Racing team claimed a third victory to equal the record of Finland's Kenneth Thelen.  Second place went to Lorenzo Gemini's SIV Arborea, who shown in the early days, and in third was Augusto Poropat's Marrakesh Express.

For the first time ever the Melges 24 family welcomed Russian sailors to a championship with three very good Russian teams joining the fleet in Torbole.  Alexander Ezhkov, sailing RUS2, took victory in the Silver Fleet ahead of Norway's Peder Nergaard sailing Blow-Henri Lloyd with Denmark's Peter Warrer in third.  In the Silver Corinthian Division victory went to Ronald Veraar of the Netherlands sailing Team Kesbeke/Sika with Italy's Ivan Venturi in Enjoy 3 third and Estonia's Tiit Vihul aboard Rock City in third.

"It's been a great Championship" - said Riccardo Simoneschi, Chairman of the International Melges 24 Class Association - "We may not have seen Guarda's regular winds, but she had given us incredible races and a fantastic battle. The Class gave a superlative response to the call for this regatta. Now we look to next season and to the creation of a European circuit of regattas that will reward the great development of the Melges 24 in all European countries and across the globe."

At the closing ceremony and prize giving the teams themselves paid tribute to the Circolo Vela Torbole, who created an astonishing championship and made this record breaking Melges 24 fleet so very welcome, and to the Race Committee for a job well done in often challenging conditions.  However, the most moving moments came as prize winner after prize winner paid tribute to the incredible spirit and talent in the class.  Germany's Markus Wieser, sailing AEZ, summed things up beautifully when he collected his tenth prize and acknowledged the incredible standard in the fleet.  Markus first sailed in the Melges 24 more than a decade ago and, after several years away, made a welcome return especially for this regatta.  He said he was proud to compete against such great competitors and acknowledged the outstanding skills of both Gullisara and Saetta.

Events like the 2012 Melges 24 World Championship are not possible without the most generous support of the event sponsors led by the Municipality of Comune di Nago Torbole and including the Regional Authority of Trentino; TrentoDoc, partner of Circolo Vela Torbole whose excellent selection of sparkling wines have been enjoyed by all; Trentingrana, whose cheese, made using milk exclusively from the Trentino area, has been the perfect accompaniment to the TrentoDoc; InGarda, the touristic company supporting visitors to Lake Garda; and technical sailing clothing supplier Marinepool. 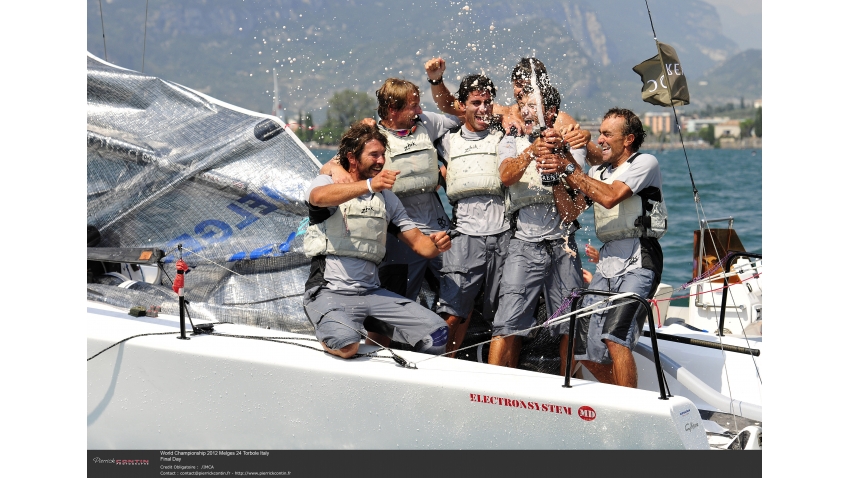