Because it's the best! Melges24 sailors shine as nominees for US Sailing's Rolex Yachtsman & Yachtswoman of the year

February 4, 2022 - United States - A huge congratulations is in order for Melges 24 Owners Laura Grondin and Harry Melges IV, and sailors at large: Taylor Canfield, Erik Shampain and Dave Hughes as they have been nominated for US Sailing’s prestigious Rolex Yachtsman and Yachtswoman of the Year award.

Five men and four women have been shortlisted for US Sailing’s 2021 Rolex Yachtsman and Yachtswoman of the Year awards. Once again, the annual rundown of the year’s “best in the U.S.” represents a wide range of accomplished sailors from various disciplines and at different stages of their respective careers. The five Yachtsman finalists earned their way on to this exclusive list by dominating their respective classes and showing true variety in their sailing accomplishments. The four Yachtswoman finalists represent a wide array experience and sailing disciplines, and each had a 2021 to remember. All nine of these sailors represent their own unique pathway to the shortlist after a triumphant season on the water in their respective boats.

Some of these sailors were selected based on their consistent exceptional performances throughout the 2021 season and some were chosen for their signature win(s) at major international or national events. These sailors have each mastered their craft and have focused on the importance of precision and performance in their competitive sailing efforts.

Laura Grondin – After a 20-year break from One-Design Racing, Laura Grondin has come back swinging in 2021, turing heads and opening eyes in the J/70, Melges 24, and IC37 classes. Grondin’s Dark Energy J/70 team placed 6th at North Americans and 3rd at Worlds, while her Melges 24 team that dons the same name won the Block Island PHRF 2 class, placed 2nd at Charleston Race Week and Gold Cup, and was hugely successful in the Bacardi Cup winter events. Additionally, Grondin helmed the IC37 that won the NYYC Leukemia Cup and placed 4th at the NYYC Annual Regatta.

Dave Hughes – In 2021, the versatile “super crew” was part of National Championship teams in 3 different classes, Etchells, J/24s, and the Atlantic Class. Additionally, Hughes and his long-time teammate, Stu McNay, won the 470 North American Champs and the US Open Sailing Series Miami, and finished 5th in the World Championships and 9th in the Tokyo 2020 Olympic Games (sailed in 2021).

Erik Shampain – 2021 was a year to remember for Shampain as his teams dominated major events across multiple classes and disciplines. Winning the J/70 Pre-Worlds event and then finishing 2nd at the Worlds Championship, Shampain’s teams also won the Etchells Midwinters West, finished second in the Midwinters East, and finished 3rd at the North American Championship. Additionally, Shampain was part the winning Congressional Cup team, a 3rd place Ficker Cup team, placed 3rd in the Transpac, and won the Lipton Cup as part of Team SDYC.

Harry Melges IV – Scow country belonged to Melges in 2021. Harry won two E Scow National Championships (the 2021 Champs as well as the rescheduled 2020 Champs), the E Scow Inland Champs, and the E Scow Spring Champs. Additionally, Melges placed 2nd in the A Scow Inland Champs and 3rd at the A Scow National Championship. Furthermore, he won the Melges 24 Gold Cup, and was part of the winning team in the IC37 East Coast Champs and the 2nd place team at the North Americans.

Taylor Canfield – The man whose name is synonymous with the Congressional Cup won this year’s event with a dominating 22-3 record making him a 5-time Con Cup Champion. Canfield’s team also dominated the M32 class in 2021 winning both the Miami Winter Series and Newport Midtown Summer Series and winning the World Championship by 40 points. Additionally, Taylor was the tactician for the Dark Energy J/70 Team that placed 6th at the North American Championships and 3rd at the Worlds as well as the Melges 24 team that placed 2nd at Charleston Race Week and Gold Cup and won the 17 boat PHRF 2 Class at Block Island Race Week. Taylor was also on the IC37 team that won the NYYC Leukemia Cup, placed 3rd in the Lipton Cup with team NYYC, and also was the Flight controller on the U.S. SailGP Team that placed 2nd at the Saint-Tropez event.

The full shortlist of nominees

The nominees and their 2021 sailing resumes will be reviewed by a panel of noted sailing journalists and past winners of these awards who discuss the merits of each sailor’s racing results before voting to determine US Sailing’s 2021 Rolex Yachtsman and Yachtswoman of the Year. The winners will be announced and presented with specially engraved Rolex timepieces in conjunction with the US Sailing Association Awards this Spring on a date and at a location to be announced soon.

For more information about these awards, please visit: http://rolex.ussailing.org. 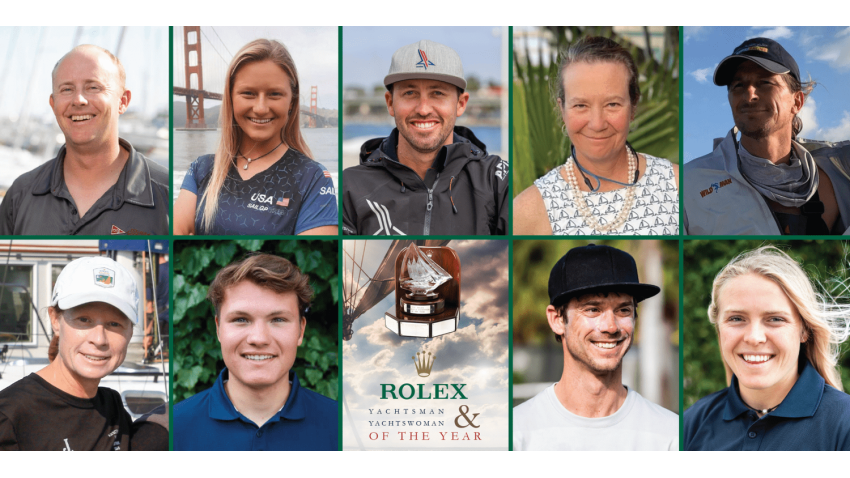