March 22, 2018 - Punta Ala, Italy - The sixth season of the Melges 24 European Sailing Series kicks off in Punta Ala, Italy this upcoming weekend. After being travelled all around the Europe during past years, 2018 season will concentrate in South joining five regattas of the Melges 24 Italian Tour, including the European Championship in Riva del Garda, and one regatta, which will be traditionally held in Portoroz, Slovenia. All the events in the series are organized by the respective local yacht clubs in conjunction with the International Melges 24 Class Association (IM24CA), Melges 24 Italian Class Association and Melges 24 Slovenian Class Association.
The lovely scenario of the worldwide famous Maremma Toscana, just a few miles away from the Argentario peninsula, is going to host the first stage of the 2018 Melges 24 European Sailing Series. The hosting organization, Yacht Club Punta Ala (YCPA), is one of the most active clubs in the international sailing scenario, having been challenger of records in the America's Cup to the Royal New Zealand Yacht Squadron with Luna Rossa.

Alessandro Masini, the Commodore of YCPA is excited to see Melges 24 international fleet in Punta Ala. 'It is almost 10 years that we are missing Melges 24 races in Punta Ala. The Class is very exciting for speed and technical issues so far and it's really an honor for us to see the Class again. Punta Ala is a great site to race and we are sure that teams, from so many Nations, will appreciate very much to race in this area. YCPA is pleased to receive all members of the teams as guests for these three days in which, I hope, weather conditions will be suitable for nice racing - we have a really good contract for it.'
Filippo Calandriello, Sporting Director of YCPA was echoing the words of the Commodore: 'We are very happy to host such a spectacular Class like Melges 24 in our waters after a long time. We will be honoured to host the Act 1 of the 2018 European Series and we hope all the owners and their crews will enjoy our wonderful sailing venue...I'll see you on the water!'
Regatta will start on Friday and will end on Sunday (March 23-25), after a series of nine races with a discard that will enter in play after the conclusion of the fifth race.
Despite the end of March, which is rather early time in Europe this year, seventeen teams from six countries will be competing for the overall and Corinthian victory of the regatta in Punta Ala. Also the points both to the European an Italian series are important to collect to be ranked as high as possible by the end of the season. 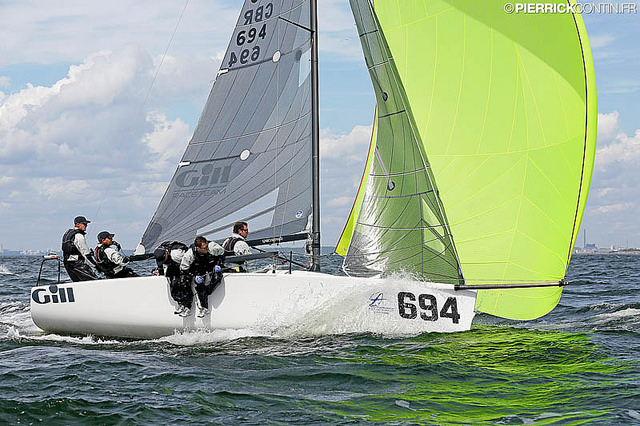 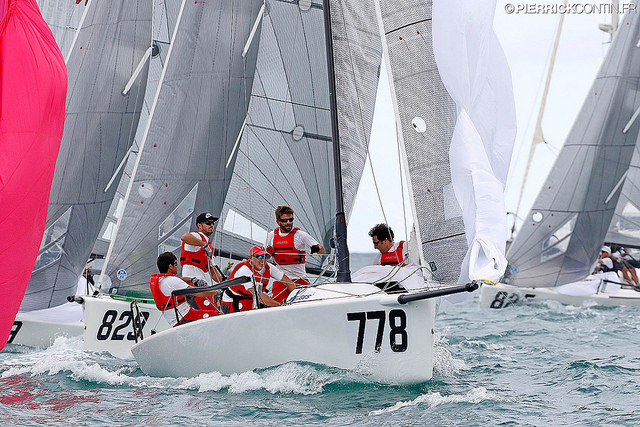 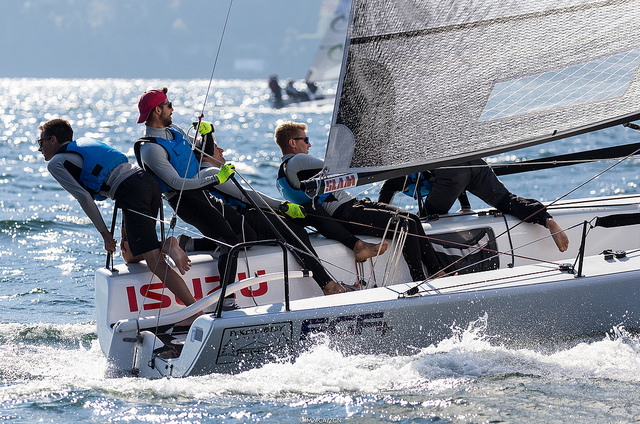 FGF SAILING TEAM HUN728 with Robert Bakoczy in helm at  the 2017 Lino Favini Cup in Luino, Italy - photo (c) IM24CA/ZGN
Wide geography of the participants will make the regatta truly international and a strong competition can be foreseen. The winners of 2017 European season both in overall and Corinthian divisions are lined up for the first regatta of their season in Punta Ala: 2017 overall winner, Miles Quinton's GILL RACE TEAM GBR694 with Geoff Carveth helming and Corinthian winner, also Corinthian World Champion 2017, Marco Zammarchi's TAKI 4 ITA778 with Niccolo Bertola-Giacomo Fossati tandem as helm and tactician on board.
See the overall ranking of 2017 series
See the Corinthian ranking of 2017 series
Seven teams of past year's Top 10 in overall ranking of the series are eager to start the season sharp to accomplish the goals set for2018, including FGF SAILING TEAM HUN728 helmed by Robert Bakoczy, being runner-up of last season and as strong as sixth at the World Championship in Helsinki. For sure, an interesting season ahead for Andrea Racchelli's ALTEA ITA722, who was very close to the podium at the Helsinki Worlds being fourth and finished the European ranking as sixth - the only team so far who has signed up from Europe with a charter boat for the first ever held Melges 24 World Championship in Canada.
For the full entry list click here
The racing of the 2018 Melges 24 European Sailing Series will kick off tomorrow, on March 23rd in Punta Ala! Media coverage of the event will be provided by the media partner of the International Melges 24 Class, Zerogradinord and Melges Europe is ready to support and serve the teams being in Punta Ala with their service van.
Media:
Follow IM24CA Facebook for the most recent news.
Event in Facebook
Webpage of Punta Ala Yacht Club
Videos in Facebook
IM24CA photogalleries in Flickr - search for "Melges Championships"
IM24CA Twitter - Melges_24
IM24CA Instagram - worldofmelges24
IM24CA Website  - melges24.com
2018 Melges 24 European Sailing Series consists of the six events altogether. The season will open in Tuscany, in iconic Punta Ala and will continue in Slovenia in April (27-29), with the fleet heading to Portoroz that welcomes the Melges 24 class for the fifth time after the successful events of the past four years. The 2018 Melges 24 European Sailing Series will then move on to the internal waters, with a double appointment on the Garda Lake: Torbole (June 29 up to July 1), where the Melges 24 international fleet will return after the 2012 Worlds with the record number of 127 entries, and Riva del Garda (August 3-10) for the Melges 24 European Championship. The season will end with the Melges 24 Italian Championship to be sailed on the Como Lake in Domaso (September 14-16), and with the Lino Favini Cup, also valid as Swiss Open Championship held in Luino (October 12-14)
More information and the  Notice of Race of the series can be found at melges24.com/europeansailingseries
For further information on the event , please contact: