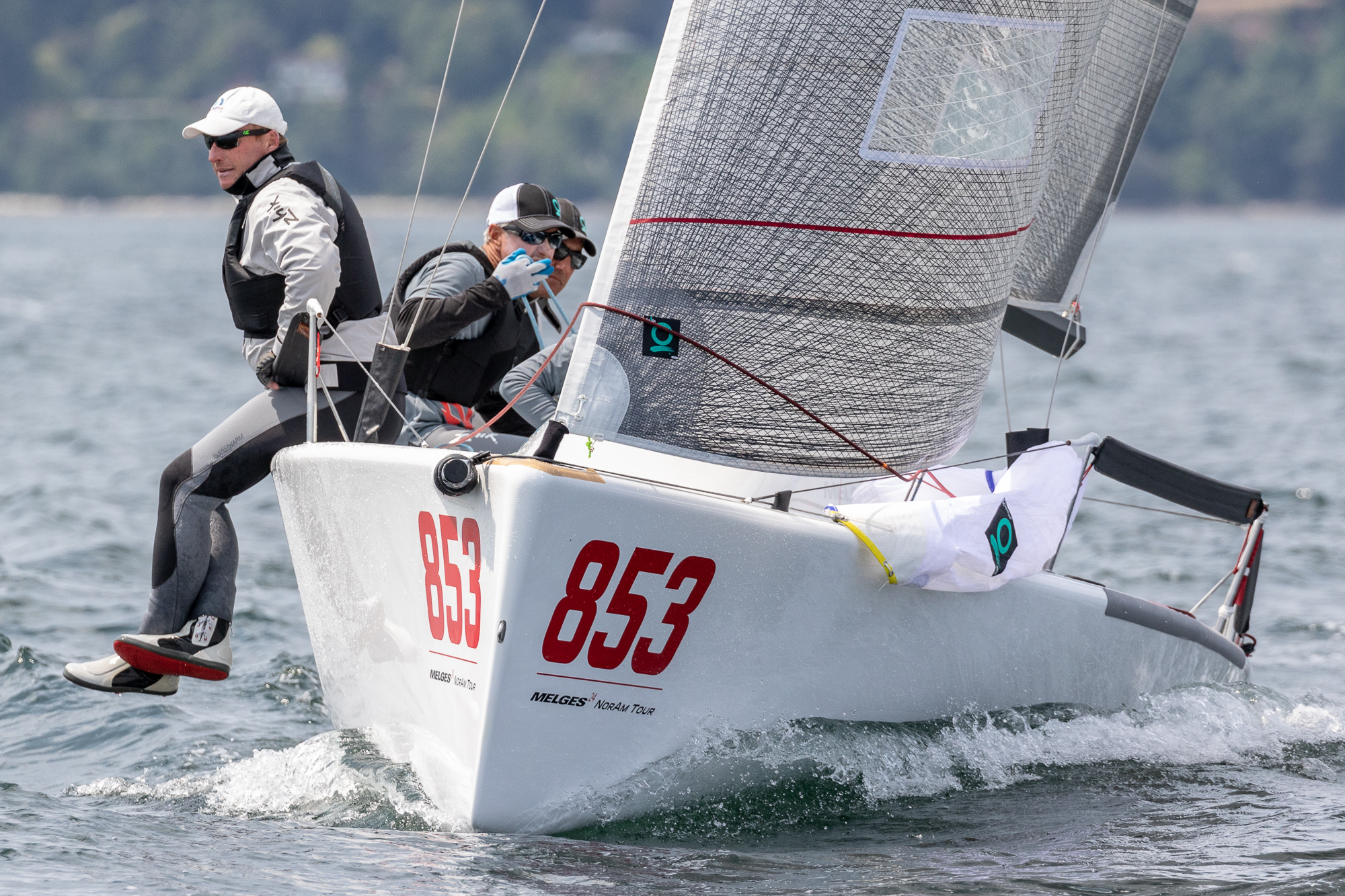 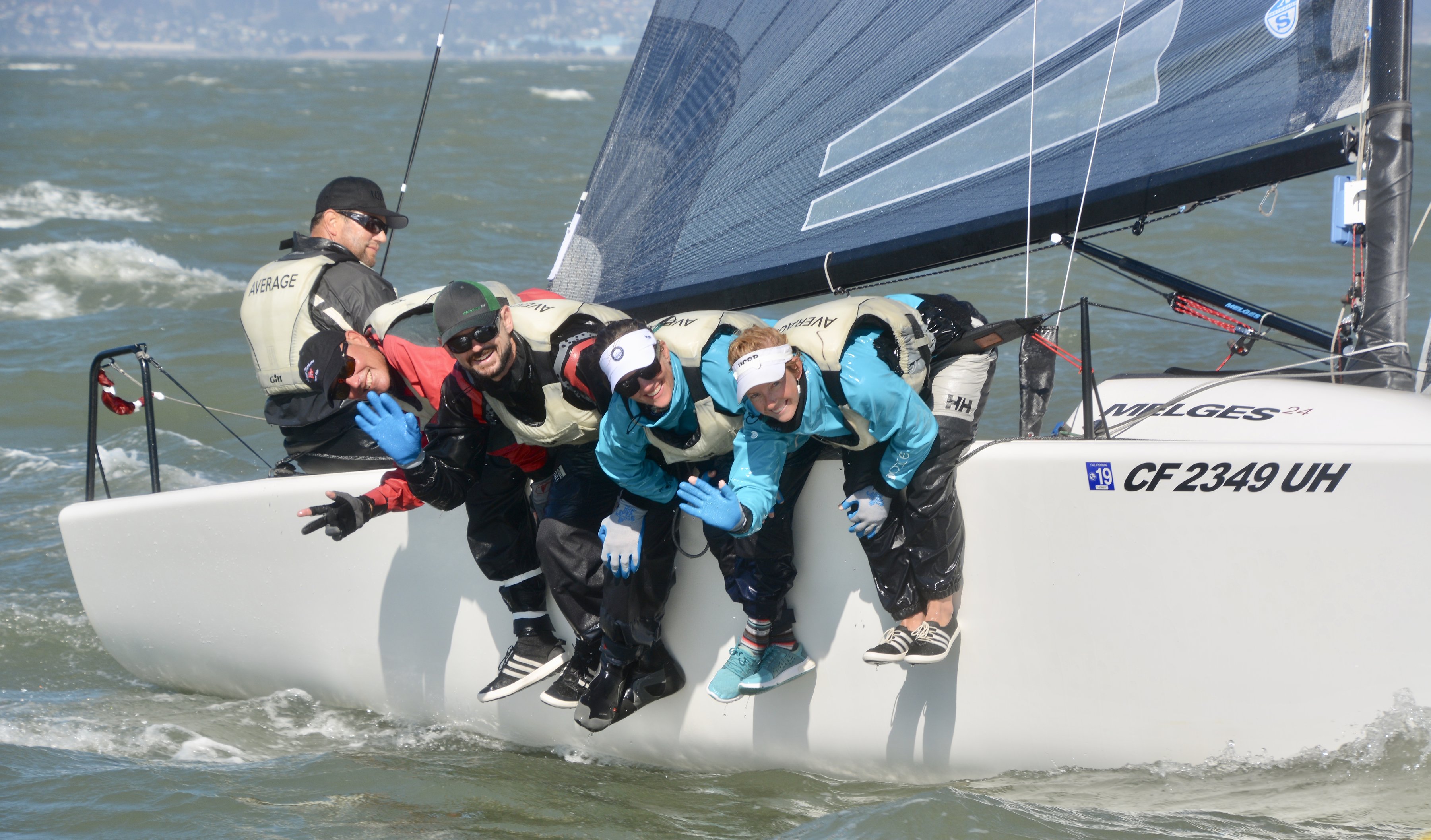 The Corinthian division was won by Kent Pierce’s USA549 AVERAGE, which placed an impressive 8th overall with a score of 60 points. Laura Grondin’s USA850 DARK ENERGY finished 13th overall and 2nd in the Corinthian Division with 50.7 points. Duane Yoslov’s USA855 LOOPER was 14th overall and 3rd in the Corinthian division with 49 points. Bob Britten’s CAN415 FULL CIRCLE (47.3 points) and MacGregor/Hammer’s USA806 GOOD ENOUGH (42.6 points) finished the tour at 4th and 5th, respectively. 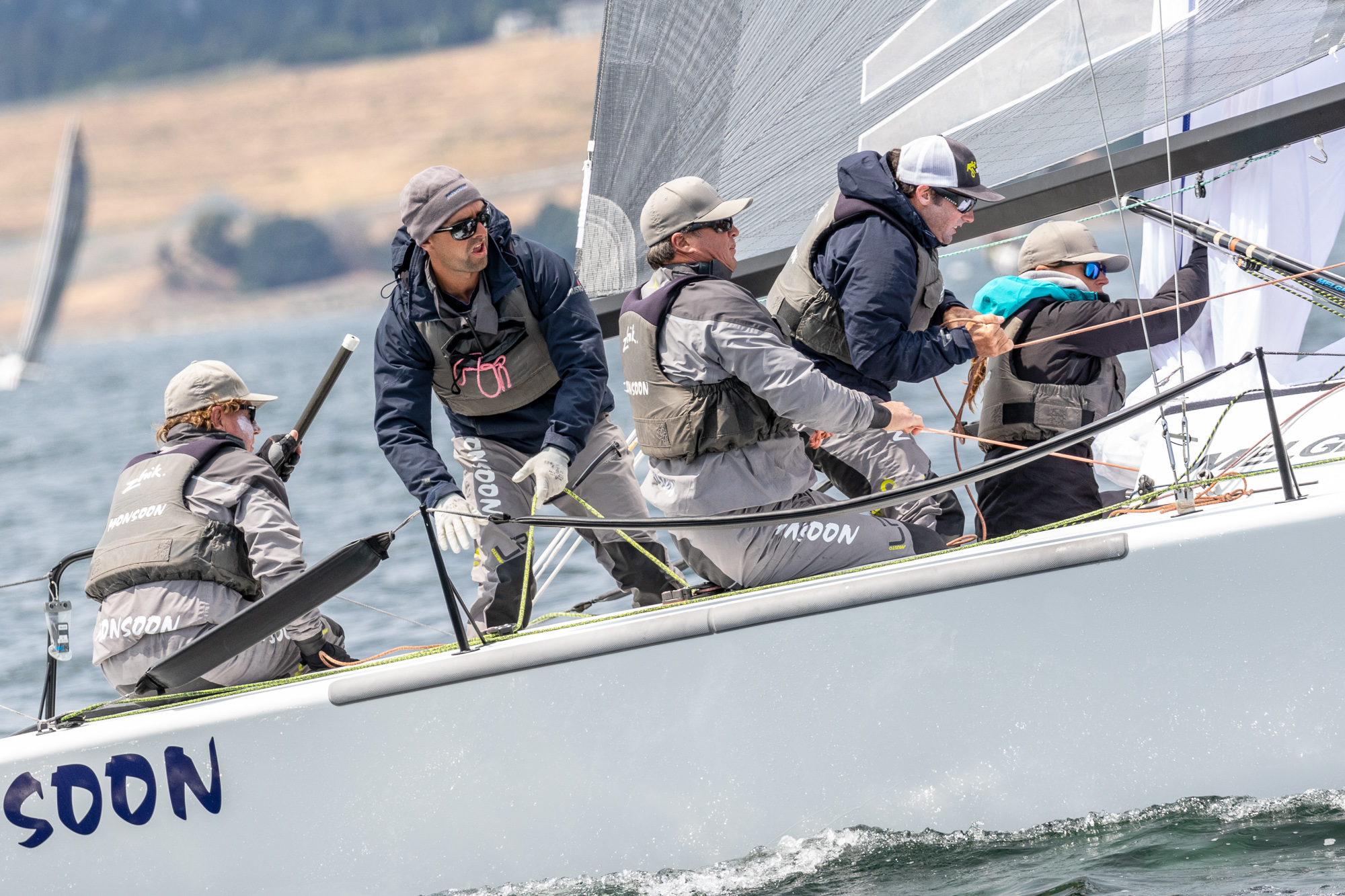 Following a month of exhilarating training in solid planing conditions Victoria was beset with uncharacteristic light air. To no one’s surprise, Melges 24 class stalwart and light-air wizard from Newport Beach, California Bruce Ayres’ A851 MONSOON carried the weekend. Hot on MONSOON’s tail was Alan Field’s USA829 WTF out of Southern California and Richard Reid’s CAN853 ZINGARA of Port Credit, Ontario. 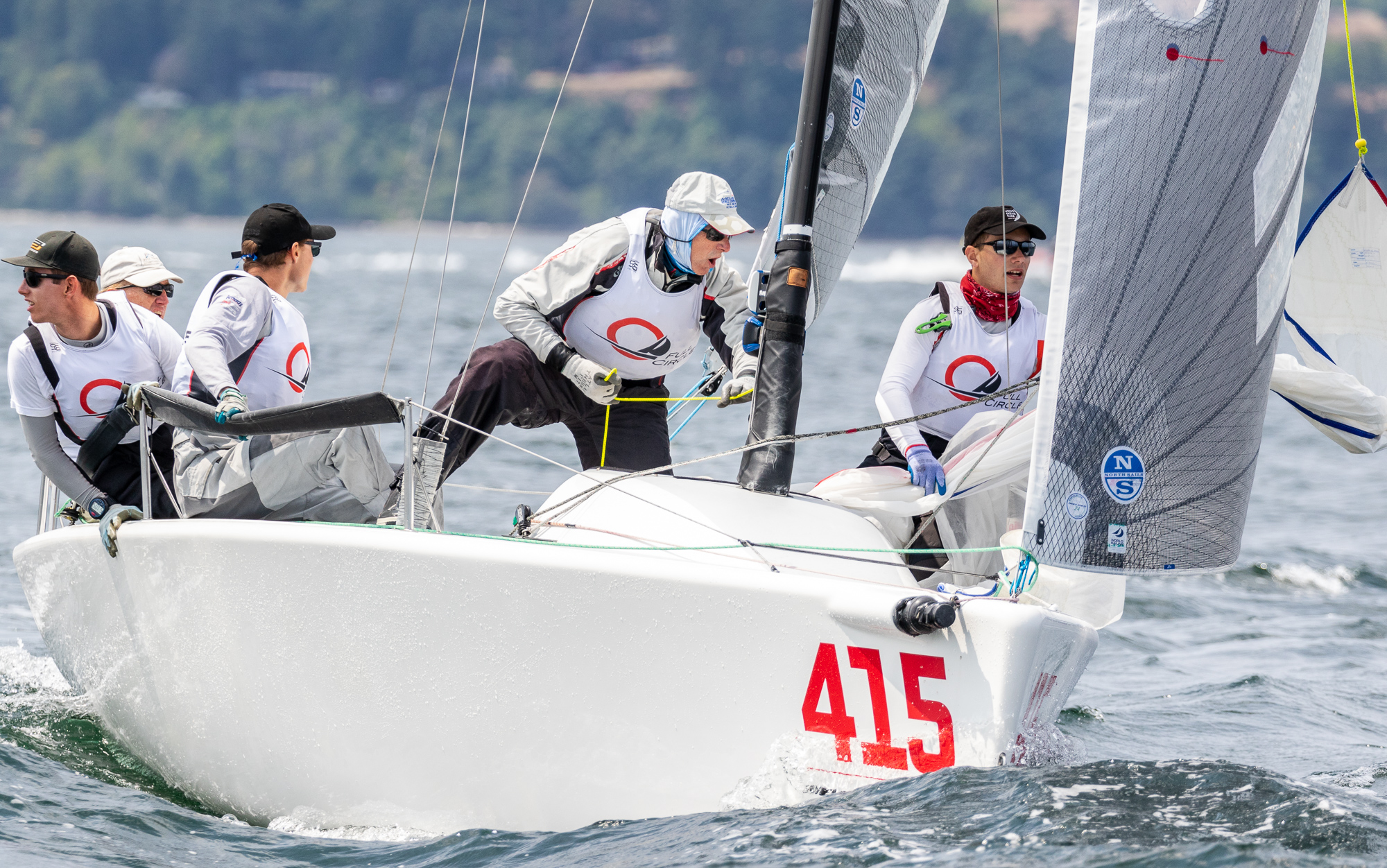 Following a convincing overall win in the first race Victoria’s Bob Britten and crew CAN415 FULL CIRCLE found their way to the top of the Corinthian fleet and fifth overall.  Local speedster CAN151 SUNNYVALE steered by Frazer McMillan and Mike Bond’s CAN 591 HOLD MY BEER of Vancouver made for an all-BC Canada Corinthian National Championship podium. 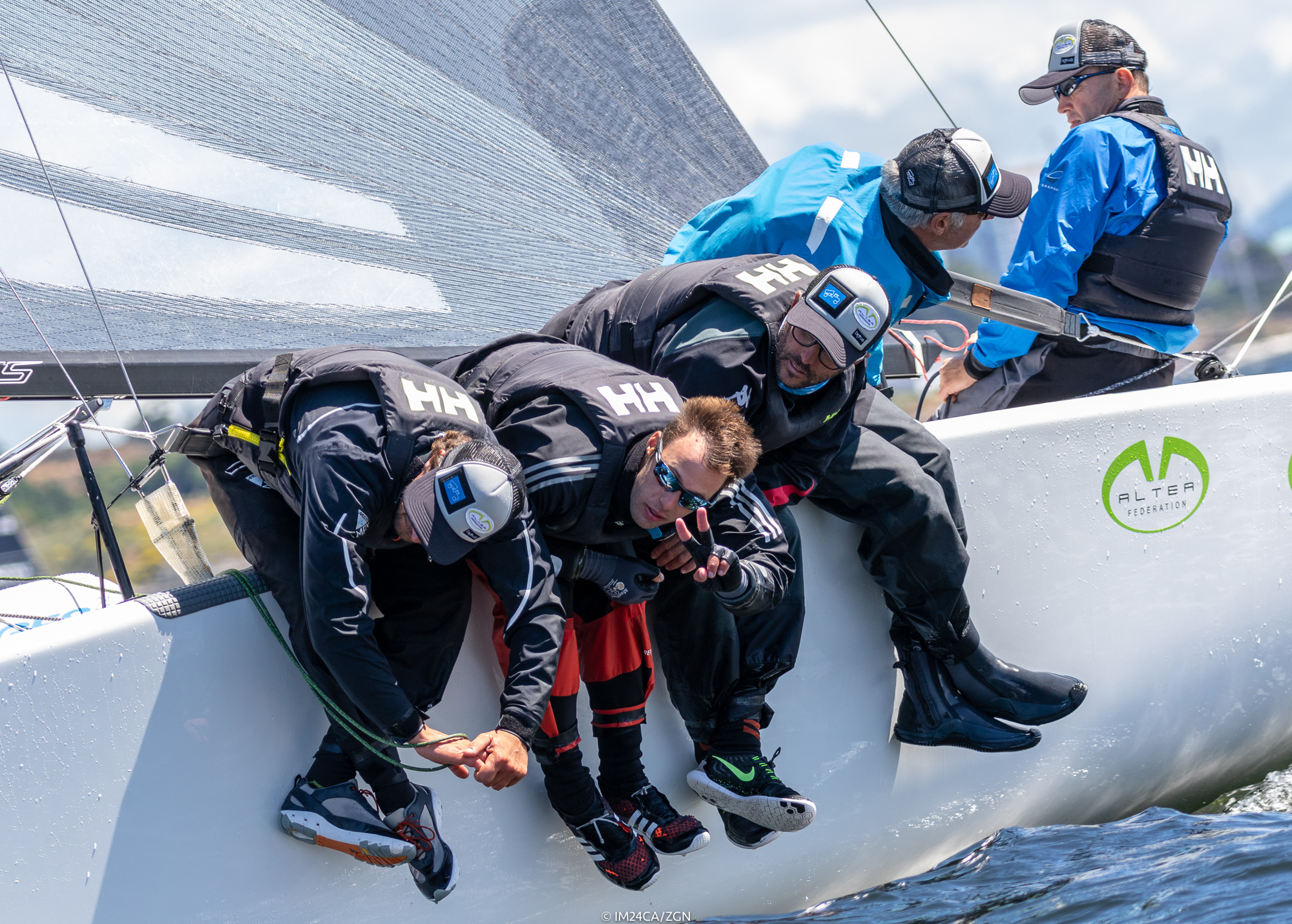 Andrea Rachelli’s ITA722 ALTEA landed on Vancouver Island, stepped onto a chartered boat one day before the event and immediately took command of the championship by posting three wins and two 5ths in the first five races. By the time the normal (windy) weather pattern had returned on the last day ALTEA had all but secured the trophy. Alan Field’s team of So-Cal surfers on CAN829 WTF took second and Richard Reid’s polished east coast team on CAN853 ZINGARA got the bronze. 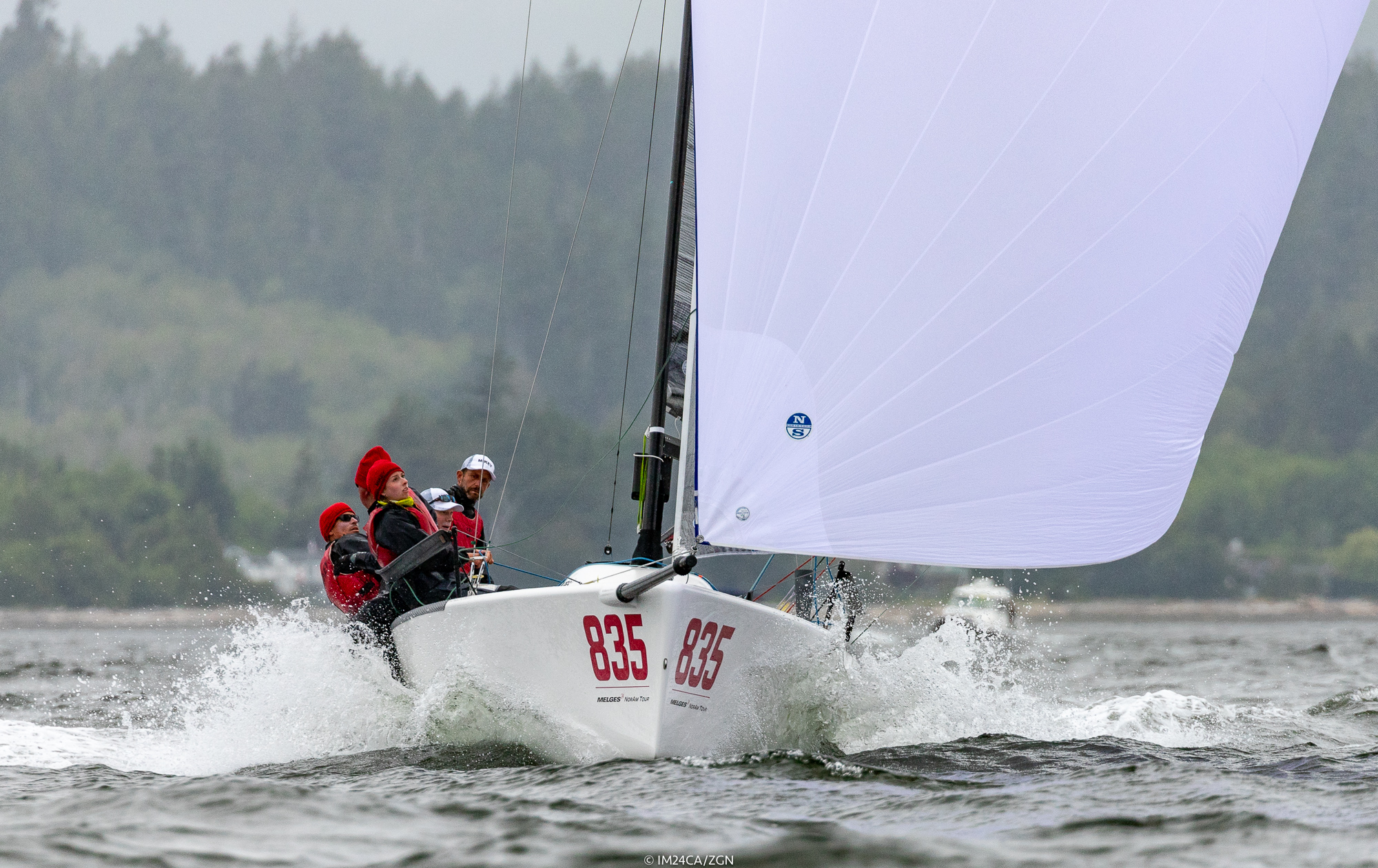 The 2018 M24 NorAm Tour finished in style on the Berkeley Circle of San Francisco Bay. Many in the fleet considered this some of the best big-air MELGES 24 sailing they had ever experienced. Each day ofthisfinal Stage of the Tour started with a warm and sunny 15-16 knot breeze that built to 24-27 knots.

Soling Olympic medalist and Melges 24 veteran, Jeff Madrigali made a much anticipated return to the helm of Kevin Welch’s CAN835 MIKEY to help the 2017 M24 North American Championship victorsand M24 NorAm Tour champion team claim the 2018 US Nationals. Richard Reid’s CAN853 ZINGARA finished a close second and Kent Pierce’s USA549 AVERAGE turned in a solid performance for third overall and first in the Corinthian division.

“I’d always heard that ‘The Bay’ offered some of the best sailing you would do in a Melges 24 and I’d still say it was under rated! Reliable building breeze, square courses, great officiating and of course killer view. The SFYC was neat, friendly and poured the perfect martini, and who could argue with the view from that deck.”

Here’s some background on Zingara’s success by Reid: “Thanks for the recognition, as you know this is a boat/fleet that rewards teamwork and practice so we stick to the following few basics:

Reid shared a bit about the makeup of the team: “We know each other well, and have sailed with each other on and off for years. I have sailed with Billy Gooderham for 15 years, Mike Wolfs lives down the street from me and Scott Nixon has been helping me out with the Zingara program for 5 years now. To answer the question we have been sailing as a team for 18 months.”

2018 M24 NorAm Tour (Corinthian) Champion skipper Kent Pierce gave us a few words on the USA549 AVERAGE journey: “So an IT guy, a commercial real estate broker, a mechanical engineer, a second-grade teacher and Jon Bell walked into a bar . . . let's go sailing they said, it'll be fun they said. So, they packed up their crap and drove to San Francisco.  When they got there they learned a few things:  what do you mean there's more than one type of spinnaker?  How many turns over base?!  Seriously?  So they packed up their crap and went back to their beer can races in Santa Barbara, bought another spinnaker and wound up their rig.

The next year they said, let's go to Santa Cruz, it'll be fun.  And it was.  (Brady's Yacht Club became the YC of record for the California Cup)

If Santa Cruz was that fun, the Gorge will be awesome!  So they packed up their tents and their kids and their sleeping bags and headed to Oregon for the North Americans where they had the best time ever!  After they finished fourth overall and second Corinthian, they said "this is fun, let's keep doing this!"

But, sometimes life gets in the way and high school graduations are life events not to be missed, so the 2018 Worlds wasn't in the cards.

Having missed the Worlds made them even more eager for the US Nationals in San Francisco, where--on one of the many downwind planing legs, Jon Bell was heard to say "I don't mind telling you guys, I'm having a lot of fun right now!" 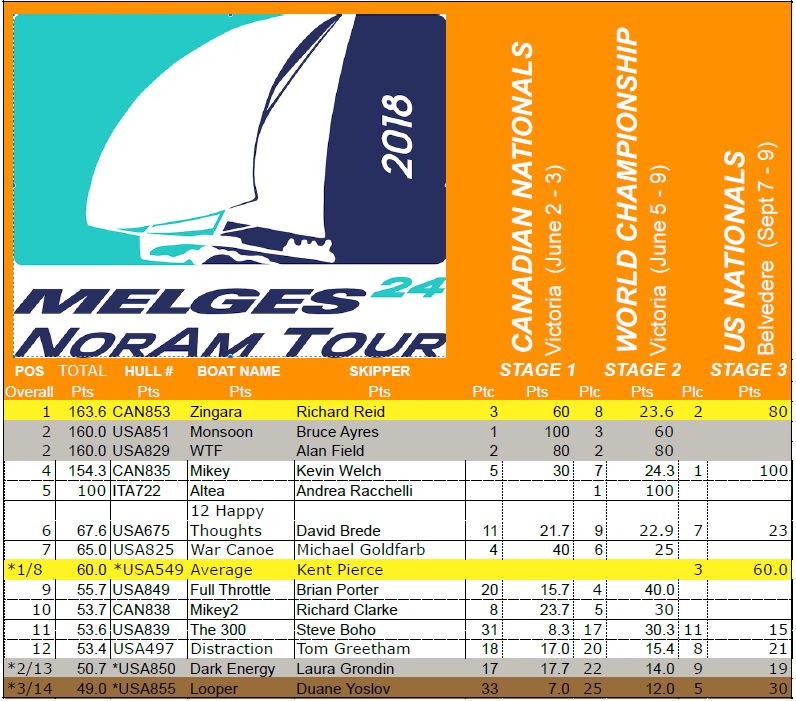 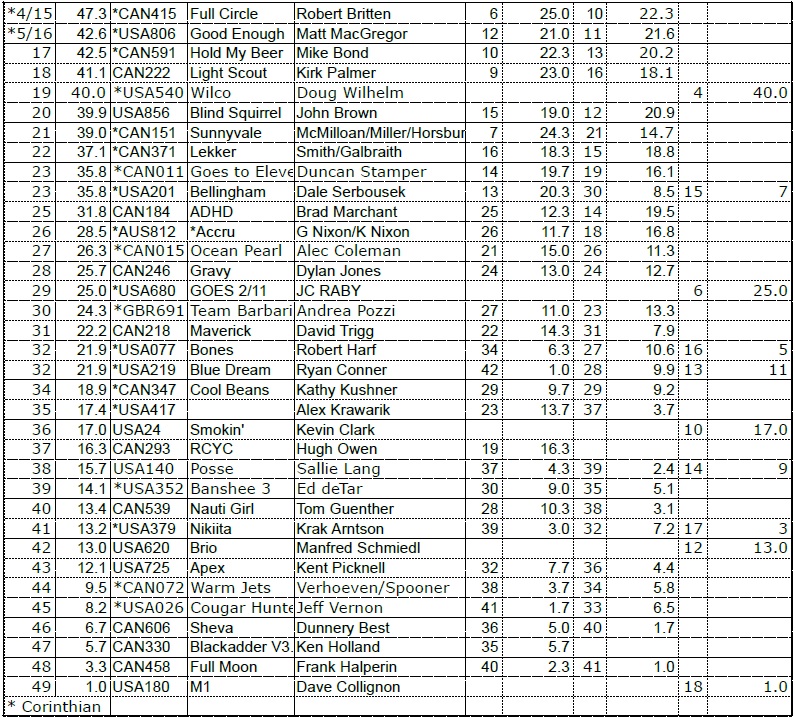