June 16, 2017 - Marstrand, Sweden - Tricky conditions were the keywords of the first day of the Melges 24 Swedish Open and Nordic Championship, considered also as the third event of the 2017 Melges 24 European Sailing Series. The race committee of the Marstrands Segelsellskäp led by Petter Vedin managed to execute three races for thirty Melges 24 teams from eight nations. Getting two bullets from three races today, Luca Perego's Maidollis ITA854 with Carlo Fracassoli helming took the lead at the early stage of the event. The leader of Corinthian division is another Italian team, Marco Zammarchi's Taki 4 ITA778 with Niccolo Bertola in helm.
The morning in beautiful Marstrand was not that beautiful though. Gray sky and rain was not something what was expected according to the today's weather forecasts. But Melges 24 teams were eager to start sailing and everything was set to start the first race of the day on time. The first attempt to start the race at midday failed due to the general recalls. Then the wind started to shift and got unstable, which meant postponement for up to forty minutes to get the racing started. Starting the race with NE wind of 9-10 knots it dropped and was very shifty making the conditions not easy to handle. Due to that the second race was postponed to set the course again. Some heavy rain highlighted the second race when for the third race the conditions for Melges 24 were just great - wind was picking up, the water was rather flat and sun started to shine giving to the Race Committee an option for the longer course. 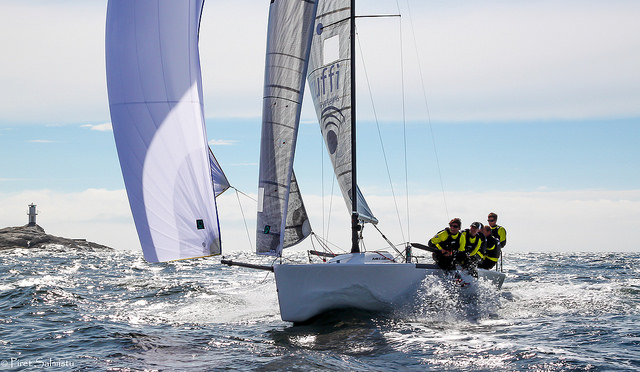 Luca Perego's Maidollis ITA854 with Carlo Fracassoli helming took the lead at the early stage of the event in Marstrand. Photo (c) IM24CA/Piret Salmistu
There were six teams out of thirty who finished at least once in Top 3 in today's races. Luca Perego's Maidollis ITA854 with Carlo Fracassoli in helm took the victory from the first and third race and was seventh in the second race. Norwegian Kristoffer Spone NOR400 was the first over the finish line in the second race and as third on the final race. Another Italian, Marco Zammarchis Taki 4 ITA778 with Niccolo Bertola helming achieved the second place from the second race and was showing strong also in the final race. Also both teams from United States managed to Top 3 - Wes Whitmyer's SlingSHOT USA747 was second on the third and Kevin Welch's Mikey USA838 with Jason Rhodes helming got the third placement on the second race. Another Norwegian managing to Top 3 was Kristian Nergaard's team on NOR600. Fracassoli has a six point margin ahead of Nergaard who is ahead of Wes Whitmyer with one point only. 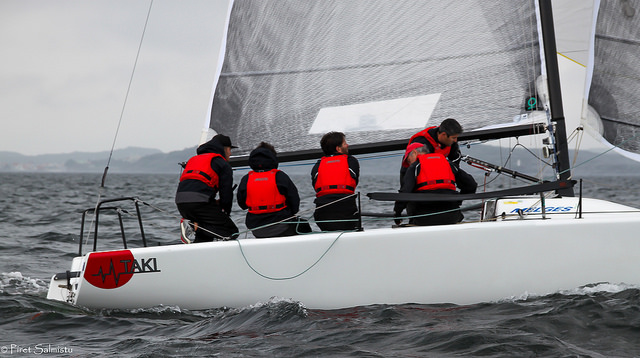 Piret Salmistu
IM24CA Administrator & Media Coordinator
+372 507 7217
piret@melges24.com
For Saturday four races are scheduled with the first warning signal at 9:55. After the first tomorrow's race the discard of the worse result will apply.
2017 Melges 24 European Sailing Series consists of the six events altogether. The first event was held in Portoroz in April, the second regatta was sailed in Riva del Garda in Italy in May; the points for the third event will be collected during the Swedish and Nordic Melges 24 Championship in Marstrand, Sweden in June; the most significant Melges 24 event of the season which is also the fourth event of the series, will be held in July-August in Helsinki, Finland, where the World Champion will be awarded; the fifth event will head to Medemblik in the Netherlands and the series will conclude with the sixth event in Luino, Italy in October.
Read for more about the series at melges24.com/europeansailingseries
Event in Facebook
International Melges 24 Class Association